This is the Biography of General Murtala Ramat Muhammed, former Head of State of Nigeria. Born on a Tuesday, the 8th of December, 1938 in the Kurawa Quarters of Kano State to Risqua Muhammed and Uwani Ramatu, he had 7 siblings (one girl and seven boys) and he was the second child. The Alkalin Kano and Chief Kadi of the State, (Chief Judge) was his grandfather (same with his great-grandfather, Salihu Dattuwa) and he would also later get infused in Quranic education. A Hausa by tribe, he was initially referred to as Murtala Kurawa after their quarters but later took up the name we all know him by today. 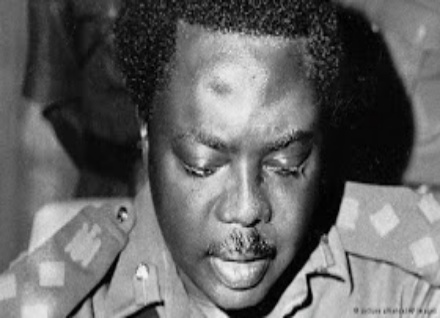 Murtala’s father was schooled and literate. He was trained as a veterinary inspector and served the Kano State Government in the Hides and Skin Department but later on left to start his own cattle-rearing enterprise.

Murtala attended Cikin Gida Primary School, Gidan Makama Primary School and Barewa College, Zaria (formerly Government College). On the 26th of December, 1952, he was admitted as student number 941 at Barewa College. He was one of the ten students from Kano and finished in 1957. One of his classmates was the late General Mohammed Shuwa shot dead at his home by gunmen in Maiduguri in December 2012. Shuwa was one of the prominent figures during the Nigerian Civil War and later a leading figure in Murtala’s government. Gowon also attended the same college.

Murtala also attended the Regular Officers Special Training School , ROSTS (Teshie, Ghana), now Ghana Military Academy where he was taught as a 2nd Lieutenant, infantry tactics and military laws by the late Odumegwu Ojukwu, a man of uncommon brilliance, in 1958. Another student of Ojukwu in Ghana was Benjamin Adekunle also known as The Black Scorpion. Both Murtala and Adekunle would later face their teacher in a bloody duel in the Nigerian Civil War. Obasanjo and Gowon also attended ROSTS. Cadets from all over West Africa then attended ROSTS for six months military training before proceeding to Sandhurst for course completion and commissioning.

Also, Murtala Muhammed attended the Royal Military Academy Sandhurst (RMAS), Sandhurst, Berkshire is about 55 kilometres from London. The academy has Her Majesty, the Queen of England as its Colonel-in-Chief and Commander. Murtala later attended the Catterick School of Signals, England and the Joint Services Staff College, England.

Murtala might have been a head-strong soldier but he was an amazing family man.

He met his Yoruba wife (with partly Fulani roots), Mrs. Hafsat Ajoke Muhammed in 1961 while she was studying at the School of Dental Hygiene in Lagos, then he was a 2nd Lieutenant in the Nigerian Army. They were both introduced to each other by his cousin. They fell in love, and began seeing each other. He proposed to her and they got married in Kaduna in 1963 after her studies, the same year he became a Captain. Their marriage was a blissful and peaceful one. In 1965, the marriage was blessed with a cheeky baby girl who later attended the Queen’s College, Yaba, Lagos.

On the 22nd of December, 1966, they had their first son, Zakari. When Murtala had a hectic schedule and had to be away on official duty, she put up with him and took care of the homefront. When he was made the Head of State, Ajoke would stay awake for days, weep out of fear and anxiety, remembering the bloody coups and countercoups, knowing fully how unpredictable life in the military could be. All she could do was to pray. She resigned her job as a dental therapist and became a full-time housewife catering for their kids who were actually very young then. As at the time he was killed, his daughter, Zalihatu was just two years old.

When Murtala was killed and the news was relayed to her, she broke down and wept for her dear husband. Her shock doubled when she heard of Bisalla’s involvement and kept asking ‘Oh, even you?!‘ There was an incident after his death: She asked an ambassador as to how Murtala would be buried, and she was stunned by his response: ‘Oh, he has been buried’. She was stunned and stung at the same time that her own husband was interred in her absence.

Today, Mrs. Ajoke Muhammed is ageing gracefully, is widely respected for her charitable activities and calm demeanour. Even as first lady, she was not necessarily flamboyant. Her marriage was blessed with six children.

Trained as a regular combatant at Sandhurst, Murtala Muhammed later took courses in Army Signals. He was commissioned as a 2nd lieutenant in the Nigerian Army in 1961 and became a Lieutenant seven months later. In 1962, he was drafted to Congo as part of the United Nations Peacekeeping Force. Upon returning to Nigeria, he served as the aide-de-camp (ADC) to Dr. Koyejo Majekodunmi, the Western Region Administrator put in place following the declaration of a State of Emergency. He was later appointed the Officer-in-Chief, First Brigade Signal Troops, Kaduna after which he proceeded again to Catterick School of Signals for an advanced course in telecommunications. Twenty-eight months after he was commissioned, he was promoted and became a Captain and appointed to oversee a signals unit at the Brigade Headquarters, Kaduna.

By the end of 1964, Murtala was already a temporary Major (known as a T/Major). Thereafter, he was transferred to Apapa as the Commanding Officer, 1 Signal Squadron. At that time, Lagos was the Capital of Nigeria where his uncle, Alhaji Inuwa Wada later became the Minister of Defence in 1965. When the first coup was carried out in December 1966, Murtala was still in Lagos. He was stung by the coup with the loss of prominent northerners. With IBB, Abacha and the rest, he would carefully plan and launch a devastating countercoup in December of the same year which cost Aguiyi-Ironsi and many others their dear lives.

The Nigerian Civil War (1967-1970) lasted for thirty blood-soaked months and one of the principal actors of that sad phase of Nigerian history was Murtala. During the war, he was the General Officer Commanding (GOC) of the Nigerian Army 2nd Division. Although he flouted rules from the top and brushed aside orders from the Army Headquarters, Murtala took no atom of nonsense or disobedience from his juniors. He commanded his division with the ruthlessness and determination of an Alexander the Great and they had some spectacular victories -and some unforgettably stinging defeats in the hands of the Biafran soldiers.

After Murtala became Head of State of Nigeria, His Supreme Military Council was constituted later on after an initial emergency council which included Commodore Michael Adelanwa as the Chief of Naval Staff. It was at this stage that coup plotting became really attractive for junior officers as the plotters were all rewarded with plum government appointment, raking off substantial financial gains in the process.

As evening was approaching on the 30th of December 1975, Murtala made his maiden speech to the nation as the Head of State and Commander-in-Chief of the Armed Forces

When he came to power, he constituted the Federal Executive Council with 25 ministerial posts, 12 of which were held by civilians even though the real power was vested in the Supreme Military Council (SMC) of which he was the Chairman. The 19 state governors were not members of the SMC, thus giving him more power to operate from the federal center. Governors did not formulate their own policies but implemented the ones Murtala sent down from the federal level. This way, Murtala’s impact was directly felt across the nation.

The Federal Military Government also took over the running of state universities and broadcasting, taking charge of the two largest newspapers published in the country. He also set up a 50-man committee to see to a new draft constitution and make plans on handing over to the civilians by December 1979. The Constitution Drafting Committee (CDC) was headed by the late Justice Rotimi Williams.

Although very brief (just a little over six months), Murtala’s time was full of events. Upon assuming power, Murtala made it clear that he would take no nonsense. He was very decisive with issues, wasted no time and because of this and many more, he became the darling of millions of Nigerians. His country men and women were immensely happy with him and were satisfied that at last, Nigeria now had a strong, decisive and uncompromising leader, the one with the discipline and tenacity to take them to the Promised Land.

In his characteristically decisive manner, he felt Lagos was too dirty, rowdy and crime-ridden to be the nation’s capital and set in place plans to build a new Federal Capital Territory, to be sited in the Abuja Emirate. He set up a panel headed by Justice Akinola Aguda to consider the possibility of a new capital. Few days before he was killed, on the 3rd of December 1976, he made an announcement that the Federal Capital would be moved to a ‘federal territory of about 8,000 square kilometers in the central part of the country.’

Murtala set up a panel headed by Justice Ayo Irikefe on the creation of seven more states (Niger, Bauchi, Gongola, Benue, Ogun, Imo and Bendel) to the 12 existing ones on December 22, 1975. The panel came up with a report which was utilized in the formation of new states in 1976.

Cancelling of the 1973 Census

Upon becoming the Head of State, Murtala proceeded to cancel the 1973 census which was lopsided to favor the northerners.

Murtala was a blunt, outspoken and consummate risk taker. A soldier who ironically had no regard for the chain of command, he was in a class of his own when it came to dangerous exploits. While planning a coup against his own Commander-in-Chief, Gowon, Murtala, then a brigadier, went to Muhammed D Yusufu, who was Gowon’s Chief Security Officer (CSO) and told him pointblank that there was a plan for a coup and he could go and reveal it to ‘anyone he liked’. That was not Murtala’s first time of announcing a coup in such a blunt manner. He did the same in December 1966 before Aguiyi-Ironsi’s government collapsed.

Murtala was an obstinate personality. When he took part in the coup that brought Gown to power in 1966, Murtala wanted the title of the Supreme Commander to himself even if that was improper and made little sense as Gowon was the Head of State. He insisted he wanted the post but seeing that the military advisors from the United States and the United Kingdom did not support him, he backed out and the ever-diplomatic Gowon compensated him by making him a Lieutenant Colonel (he was acting prior to that time) and also made the Inspector of the Army Signals Corps.

A no-nonsense person, Murtala was known for his legendary outbursts of terrifying anger. Although many of his fans may not be aware of this especially with the passage of time. However, his fire-and-brimstone part was just one side, he had his good fractions too. Apart from the earth-shaking anger, he also exhibited what some have described as arrogance and insubordination, especially to his superiors and there are many instances given to illustrate this. 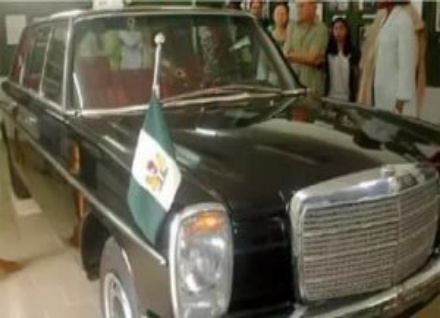 Murtala’s life was cut short at the tender age of 37 by coupists led by Buka Suka Dimka in Lagos on December 13, 1976 after his car was attacked and he was gunned down.