It’s no news that there are some strong persons who wield influence in Buhari’s administration. These people are seen as the strongholds of the APC and their actions have shown that in Buhari’s government, they cannot be queried or sanctioned. 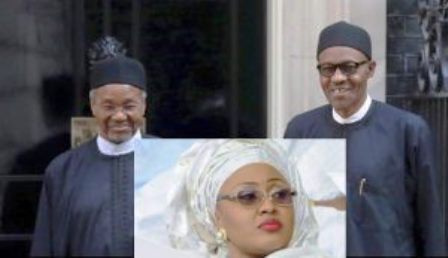 Most of these powerful persons also helped sponsor the presidential bid of Buhari while others are his trusted friends and allies who protects the interest of the Nigerian president.

She is the wife of the President as she loves to be called by that title. Mrs. Aisha Buhari is the first on our list of most influential persons in Buhari’s government. Since her husband’s emergence as president, she is seen to be the one closest to him since people use through her to curry favour from Buhari himself.

She also has the wives of many state governors especially those whose husbands were voted as state governors under the umbrella of the All Progressive Congress, APC in her clique to do her bidding. Like other first ladies before her, she is engaged in some projects aimed at alleviating poverty, empowering and giving a voice to the women in the society.

ALSO READ:  Aliko Dangote's Wife: Things You Did Not Know About Her

Another strong personality that is powerful in the Buhari’s administration is Mallam Nasir El-Rufai, the Governor of Kaduna State. His closeness to the President is not in doubt as he is seen as the most regular governor who visits Aso Villa. He also influenced most of the appointments made by Buhari.

He was the former Governor of Ogun State and has been a very close friend of the President even before the merging of different parties to form the APC. The closeness of the two excels beyond the political realm as Buhari’s family and that of Amosun are so close.

Sources say that it was Amosun who drove the President around anytime he visits Lagos. Just like El Rufai, the governor is also a popular figure at the Aso Villa. He had a hand in the appointment of Mrs Kemi Adeosun, the former minister of finance who was once a commissioner of finance in Ogun State.

He is one of the richest men in Nigeria and a top military officer. He was one of those persons who sponsored the Presidential bid of Buhari. His influence in the political atmosphere in Nigeria makes him one of the most influential figure in Nigerian politics. It was said that he had a hand in the appointment of Dr. Ibe Kachikwu as Minister of State, Petroleum Resources and the Group Managing Director of the Nigerian National Petroleum Corporation.

Daura is the nephew of the President and plays a major role in the appointments and decisions taken by the Presidency. Of recent, the first lady mentioned that there is a “cabal” who dictates how things are run in the Presidential villa and in Nigeria. He is believed to be part of that cabal. Daura travels a lot with the President and is a trusted ally as he, Buhari and some prominent northern figures belonged to a group called “Kaduna Mafia” when they were young.

Ismaila Isa Funtua is a close friend to the President and the Chairman of Bulet International Construction Company. He is also one of the most powerful persons in Buhar’s govt. He was among the delegates who travelled alongside the president to USA. He holds no political office but is even more powerful than those who hold positions in Buhari’s administration.

He was the Chief of Staff and another power broker in Aso Villa. All visits to the President passed through him. He was also the ears of the president as no minister has access to the president directly without his consent as directed by the President.

He died of the coronavirus pandemic and has since been buried according to Islamic rites.

He is another strong figure in the Buhari’s administration and is the current Secretary to the Government of the Federation. Mr. Babachir Lawal is very outspoken, carrying out his supervisory roles and functions on some government agencies and departments. He is also on the list of influential people in Buhari’s govt.

It should not surprise you that Alhaji Dangote, Africa’s richest man is on the list of strong people within the Buhari’s administration. Even though he doesn’t show himself as a politician, he still has a stake in whatsoever government that enters power and has access to the President directly.

He is another powerful person under this administration and is the current Director-General of the Department of State Services. Most of the arrest you hear today by the DSS happened under his watch. Daura has a good relationship with Buhari as he joins the President for the Friday Jumat prayers within the Presidential Villa.

Finally, the likes of Tinubu, Osibanjo, Oshiomole, Okoroacha aren’t as influential and powerful like the listed people above in Buhari’s government