In Ancient times, before the British colonization of Nigeria, there were powerful kings in Nigeria who were seen as demi-gods who were said to have great influence and control over their subjects and on the people they rule. 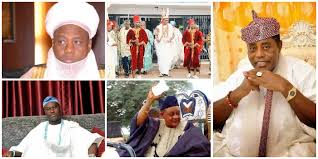 In modern times, the powers of these kings have declined due to the emergence of the Federal system of government operating in Nigeria. Nevertheless, there are still some of these monarchs whose influence cannot be underestimated and are respected due to their heritage and tradition from time immemorial.

In no sequential order, Below are the current top 10 most powerful Kings in Nigeria (latest ranking)

The Sultan of Sokoto

The Sultan’s position in Nigeria dates back to the pre-colonial era and is one that has a lot of influence especially for the Muslims. He is not just seen as a Monarch but the spiritual leader for the Muslims in Nigeria. Currently, Sultan Muhammadu Sa’ad Abubakar IV is the present Sultan of Sokoto and a first class king in Nigeria. He succeeded his late brother Muhammadu Maccido who died in a plane crash, the ADC Airline flight 53 flight to be precise.

The Emir of Kano

Mallam Muhammad Sanusi II was the former Emir of Kano as he was removed by the Governor of Kano state recently. Sanusi was formerly the governor of the Central Bank of Nigeria. He was made Emir after the death of Alhaji Dr. Ado Bayero who ruled for 51 years. The current Emir of Kano is His Royal Highness, Aminu Ado Bayero.

The Alaafin of Oyo

The Alaafin of Oyo is seen as one of the most powerful kings in Nigeria because of the culture, heritage and history of the old Oyo empire which dates back to the pre-colonial era in Nigeria.

According to legend, the Alaafin of Oyo wielded such sovereign authority and was seen as god to the Yoruba people. The current Alaafin of Oyo is Lamidi Olayiwola III, who succeeded Alaafin Gbadegesi Ladigbolu II.

The Ooni of Ife

The current Ooni of Ile-Ife is Oba Ogunwusi and he is the paramount ruler of the Ife dynasty. It is said that he plays a strong part in choosing the Osun’s state governor. The Ooni is also a first class King.

The Dein of Agbor

History has it that the Dein of Agbor became a king at just four months old which makes him the youngest monarch to ever ascend a royal throne in Nigeria. King Benjamin Ikenchukwu Keagborekuzi is currently the Dein of Agbor or Officer in the order of the crown as it is popularly called.

He is also referred to as “Omo N’Oba” and the ruler of the Benin kingdom. The power of this traditional ruler is seen as supreme as the ancient Kingdom of Benin dates back even before the colonial masters settled in Nigeria. The current Oba of Benin is Oba Ewuare the II (Ogidigan) Uku Apkolopkpolo who succeeded his late father Oba Eriaduwa.

He is also referred to as the Eleko of Eko, Oba Rilwan Babatunde Osuolale Aremu Akiolu is the current Oba of Lagos and an influential king in Nigeria. Lagos itself was the former capital of Nigeria and currently the most populated city in Nigeria.

The Olu of Warri is another powerful first class king in the country. He is the leader of the Itsekiri people. The Warri kingdom is currently ruled by a popular Nigerian lawyer, who has held various positions in Warri, Godwin Toju Emiko. Warri is located in Delta state

Olubadan means Lord of Ibadan and was held by late Oba Samuel Odulana Odugade who died at the age of 101. The current Olubadan of Ibadan is Oba Saliu Adetunji and is also late. Ibadan is also an ancient Kingdom.