Nigeria itself has the largest population of Christians in Africa and it is not surprising that there are many church denominations with thousands of congregations spread all over the country today. 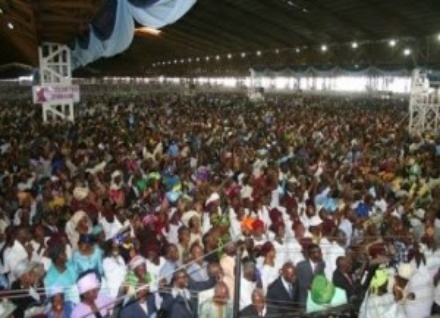 According to a recent survey, the population of Christians in the country is slight lesser than that of the Muslims. In fact, Christianity which is one of the three major religions in Nigeria has about 48% of Nigeria’s total population.

While the argument as to which church in Nigeria has the highest population often goes unanswered, people tend to choose their own church were they worship which of course makes their claim biased. Take for example, Redeemed christian church of God has one the biggest church auditorium in the country doesn’t make her the first on the list.

In this post, we provide top 10 most populated churches in Nigeria and their figures in terms of congregation size and membership base.

The Catholic church still remains the church that has the highest congregation number in Nigeria and in the world. The population of baptized Catholics in the country stands at about 23.5 million active members. It would shock you to know that this church is also one of the richest churches in the country and also in the world.

ALSO READ:  How To Check Custom Duty Online in Nigeria (2023)

With more than 3000 parishes and branches scattered all over various states in Nigeria, the members of the Catholic church in the country are headed by different Archbishops, Bishops, Priests and other religious people depending on the diocese they belong. Most of its core members also flock into other denominations in search of miracles yet their number keeps increasing every day.

The Anglican church has about 12 million active baptized members. They are the first church in Nigeria according to historical records that brought Christianity during the era of the British colonial masters.

Currently, fourteen of its ecclesiastical provinces in the country are all governed by Archbishops headed by the Primate. The Anglican Church of Nigeria is independent and has since cut all affiliations it has with the Church of England.

Popularly known as RCCG, the Redeemed christian church of God is the 3rd most populated church in Nigeria this 2018 with about 2.5 million active members in its record data base. Aside this, they are also among the largest Pentecostal churches in the country with the biggest auditorium to stake its claim when talking about Christianity in the country.

Headed by Pastor Enoch Adeboye, one of Nigeria’s most respected men of God, RCCG has grown to be a household name both within and outside the country. The Redeemed christian church of God is the fastest growing church in Nigeria today with up to three to five branches in every street in Lagos.

Also known as Winners Chapel, Living Faith Church World Wide is also one of the most populated Pentecostal churches in Nigeria. The head or General Overseer of this church is Bishop David Oyedepo who doubles as the richest pastor in the country, in Africa and in the world.

In terms of membership base, the congregation of Winners Chapel in the country is estimated at 1.5 million members. Their crusade and other religious activities carried out by this church normally have more than half of their total population in attendance. Its headquarters is Ota in Ogun State and have many branches.

Another popular church in the country worthy of mention is Christ Embassy with approximately 1 million members nationwide. The population of this church increases on a yearly basis. This church is headed by Pastor Chris Oyakhilome, one of the influential and outspoken pastors in the country that organizes prayer and healing crusades.

This popular Nigerian church headed by Dr. Daniel Olukoya can be considered among one of the most populated churches in the country this 2018 occupying the sixth position on our list.

Mountain of Fire and Miracle Ministry (MFM) are known for their fire brand fasting and prayer services, worship and praise nights, etc. MFM also have one of the largest church auditorium able to contain 500,000 members of its congregation during any of their vigil or prayer crusades.

Deeper Life Church as it is fondly called is one of the oldest church in the country founded by a highly respected man of God, Pastor Williams Folorunsho Kumuyi in 1973.

Today, Deeper Life can boast of a membership base of 700,000 followers with branches all over the country. This church are known for their strict adherence to the Bible commandments and Christian dress code.

The Lord’s Chosen is another fast growing church in the country with over 650,000 baptized members in her data base. The founder of The Lord’s Chosen, Senior Pastor Lazarus Muoka was once a Catholic before he separated and established his own church.

Daystar Christian Center or DCC is also on our list of populous Nigerian churches headed by Pastor Sam Adeyemi, one of the country’s influential pastors.

Pastor Sam Adeyemi has built DCC that it has become popular among the youths and his Sunday services are attended by virtually 100,000 members. Daystar is also among the churches that has the largest auditorium in Nigeria.

House on the Rock is the last on our list of churches in Nigeria with the highest population this 2023 with about 495,000 members as its congregation size.

Established by Pastor Paul Adefarasin, this church has branches both inside and outside the country. It is often said that the rich patronize this church a lot.