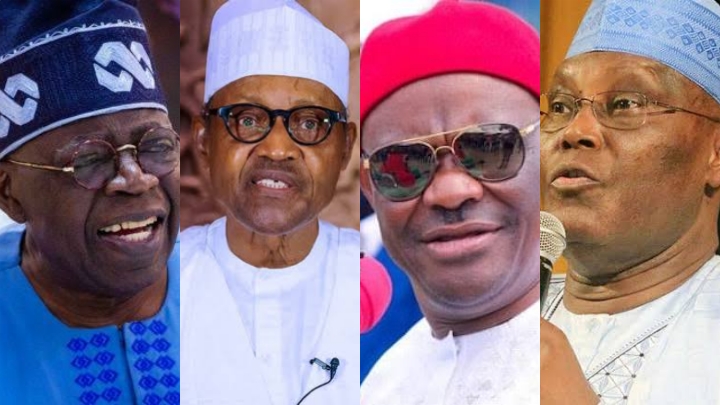 Either ways, this article on Nigeria’s most influential politicians is my own personal opinion as to who calls the shots in Nigeria. Although, the list might look bias as I won’t mention some names, below are the criteria I used in preparing the list

TOP 10 MOST INFLUENTIAL POLITICIANS IN NIGERIA

In no particular order, here are Nigeria’s most powerful political leaders this 2023

Popularly called Jagaban, Bola Ahmed Tinubu was born on 29th March 1952 in Lagos. He is seen to have influence in Lagos and most of the south-western Yoruba states. He is the most successful politician in Lagos state politician. He is a leader to the Yoruba people and also to the APC. He served as governor and senator in Lagos state and has influenced a lot of elections, especially in south-western Nigeria. Tinubu’s net worth is estimated at $1.5 billion and he is the current presidential flag bearer of his party, the APC.

He is currently the President of Nigeria and was elected on the platform of the All Progressive Congress (APC) in the last general election. He is also the leader of the Fulani/Hausa people. His influence extends not only to the north but to the south as he commands the armed forces of the nation. Most people fear him due to his military background and strictness.

Kwakwanso is another powerful Hausa politician that has a large following especially in Kano, Kaduna and some other northern states. He was elected as a two time Governor of Kano state from 1999 to 2015, where he performed well. Aside this, he has also occupied different political positions at the federal level in the country. He was also a senator at the National Assembly in 2015, representing Kano Central Senatorial District under the APC. Rabiu Musa Kwakwanso is the national leader of the New Nigeria Peoples Party (NNPP), and also its presidential flag bearer for the 2023 general elections.

Peter Gregory Obi is the most influential politician in Nigeria this 2023. As of writing this post, he is force to be reckoned with, that virtually all political parties speak about him all the time. His fans or followers, identify themselves as “obidients” on the premise that Obi will transform the country. He was two time governor of Anambra state and also the vice presidential candidate but now, he is the presidential flag bear of the Labour party.

Atiku is a Nigerian politician and businessman who is also among Nigeria’s powerful political leaders. Having served as the vice president of Nigeria during Olusegun Obasanjo civilian rule from 1999 to 2007, he is no ordinary person in Nigeria’s politics. He holds the record of contesting for the office of the President of the federation since 1993 till date, where he lost all even after changing parties. He is still in the running for the 2023 general elections.

If there is one person or better still the most outspoken politician who wields so much influence in Nigeria’s politics, it is no other person than Nyesome Wike. While there are a number of influential governors, mostly from the two major political parties in the nation—the ruling APC and the main opposition PDP—whose influence now extends beyond their states and has significant political ramifications for the entire country, particularly in light of the 2023 elections. Wike, the governor of Rivers State, is one of them.

It is becoming more obvious that Wike is among the most powerful politician in the PDP as everyone flocks to him even if he didn’t win the party’s nomination ticket given his powerful influence within the party and solid financial foundation. Wike represents the face of the new power brokers within the PDP, a party that was once led by seasoned politicians, retired generals, and elder statesmen.

Although his political influence has declined over the years, Obasanjo is still highly revered in the political sphere of the country. He is popularly called “OBJ” or “Baba”. Obasanjo was born in Ogun state and is often tagged the most successful politician in Nigeria. He was once a military head of state and also a democratically elected president.

He is popularly called “IBB”  and is believed to be among the powerful politicians in Nigeria. He was born in Minna, Niger state on February 17, 1941 and was one time a military president in Nigeria. He is seen as an influential figure to the people of the north.

He is the immediate past president of Nigeria. He ruled as president of Nigeria for 6 years before he lost to President Buhari. He is loved my many and also hated by many. He is said to have massive influence in the south south and south eastern parts of the country.

Yakubu Danjuma is a Nigerian politician and multi-millionaire businessman. He was Nigerian Army Chief of Army Staff from July 1975 to February 1979. He is also a leader to the Northerners and a prominent figure in Nigeria.