A survey report in the year 2012 stated that Nigeria lost over half a trillion dollars to corruption since it’s independence in 1960. There are many factors and things that contribute to this unwanted record. One of such is the corruption of the populace which is proportional to the tribes that makes up. With over 500+ distinct ethnic groups making up the entirety of the country, their corruption rating will certainly be distinguished. This article will be more explicit on the top five most corrupt tribes in the country. This gives a picture of the state of corruption in the nation, and how it can be brought to a halt. 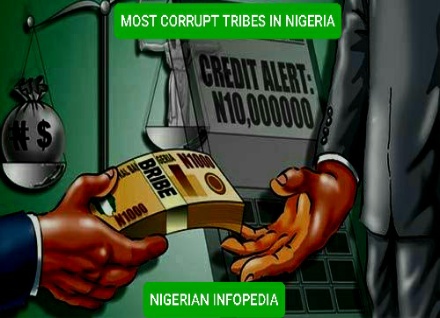 Nigeria is often attributed by the occupants as the most corrupt country in Africa. But this allege fact is close to the real one, as the country follows in the list of most corrupt countries in the continent. Globally, the Transparency International’s Corruption Index in 2018 saw the country ranking 144th in the 180 countries listed in the survey report. It African counterpart, Somalia occupied the 180th position to be was ranked as the most corrupt in the continent.

What then is corruption, and the ones that are prevalent in the country? Corruption can be basically seen as any form of mis-conduct by someone, aiming to illegally extort money (or any other essential things) from another person. It is also a dishonest or illegal behavior especially by powerful people (such as government officials or police officers) against their subordinate victims. Forms of corruption vary, and the most common ones in Nigeria include bribery, extortion, cronyism, nepotism, parochialism, patronage, influence peddling, graft, and embezzlement. Additionally, corruption may facilitate criminal enterprise such as drug trafficking, money laundering, and human trafficking, though it is not restricted to these activities.

With Nigeria being the most populated country in Africa, the probability of having some bit of corrupt tribes will be high. More than five hundred (500) distinct tribes and ethnic groups make up the entirety of the country. Corruption may not be uniformly present in all areas of the country, but an area or state may be more corrupt than the other. As such, it leads to the variation in the stats of tribes that perceived as the most corrupt.

ALSO READ:  How To Legally Notarize A Document in Nigeria (2022)

Below is the rundown list of the top five most corrupt tribes or ethnic groups in Nigeria;

This is an ethnic group that occupies the south western part of the country. The Yoruba make up about 21% of Nigeria’s population. Since corruption is mostly propagated by an increasing population, it can be categorically stated that this tribe is alleged as one of the most corrupt in the country. Though this may be an allegation, but it can be supported by taking inference from some specific areas in the tribe.

An area in Yoruba like Lagos city, which is the most remote urban area in the country, and equally the most populated city in the continent. The area is known to be occupied by innumerable people. From this, the corruption rate is very high in the area. Almost all Yoruba states were attributed as the leading states in the country in terms of corruption. These include states like Lagos, Ogun, Osun, Oyo, Ekiti and Ondo states. However, it’s not only these areas that are corrupt, as other states still contribute to the rate of corruption in Nigeria.

In the rank of the most corrupt tribes in Nigeria, Imo, Abia and Ebonyi states were included as leading in the corruption states of the country. Also, some notable public figures and politicians of the Igbo tribes has been indicted of corruption charges. Most Igbo states leads the list of the most populated states in southern Nigeria, as due to this and all other facts, the tribe is seen as the most corrupt in the country.

Some notable political figures from the Hausa tribe have been indicted of corruption cases. Taking inference from this and many other contributing factors, this ethnic group can be categorically attributed as the third most corrupt tribe in Nigeria.

This is another significant tribe in Nigeria, aside from the major three above. The Igala ethnic group is predominantly found in Kogi state in the central part of the country. This state is rated as one of the most corrupt states in Nigeria.

Deducing from this, Igala tribe which occupies major parts of the state is equally seen as one of the most corrupt tribes in the nation. Moreso, a good number of prominent personalities, especially political office holders from Kogi (precisely Igala tribe) have been allege of some corruption charges.

This is a major tribe in the south-southern part of the country. The tribe is found mainly in Bayelsa, Rivers and Delta states, with some significant numbers in neighbouring Akwa-Ibom, Edo and Ondo states. The tribe is alleged as being corrupt, because of the high rate of corruption cases against most political office holders from the area.

Some of the prominent ones that have been indicted of corruption include James Ibori, Patience Jonathan, Emmanuel Uduaghan, Lucky Igbinnedion, and Peter Odili. This and many other things have make the Ijaw tribe been attributed as the fifth most corrupt tribe in Nigeria.

There are many disadvantages of corruption in a country. Most especially, it erodes the trust we have in the public sector to act in our best interests. The presence of corruption also wastes our taxes or rates that have been earmarked for important community projects – thereby resulting to underdevelopment, poor quality services and infrastructure, or we miss out altogether.

In a more elaborate way, we have highlighted the most corrupt ethnic groups and tribes in Nigeria. That’s the size of this write-up, as we have been more excessive on corruption in the country, by highlighting the most affected areas.