Home Facts Information 10 Most Corrupt Countries in the World (2022)

In a recent transparency international corruption list which showed in details top corrupt countries in the world this 2022, Nigeria was not indexed. Others like Somalia was ranked first.

But what makes a country corrupt? Find out in this article on the top 10 countries where bribery, bad leadership and other vices has become official. 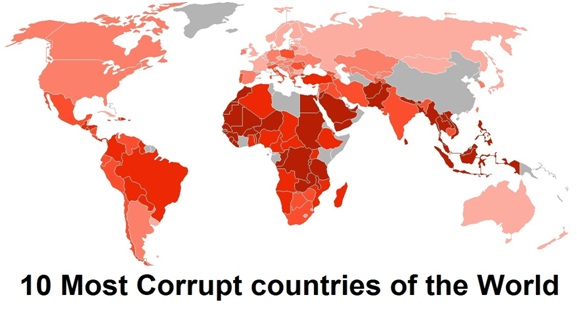 Corruption as defined by oxford dictionary is that act by which one chooses to follow a wrong path despite seeing a right way to follow. This practice also involves bribery, stealing from government purse, tribalism, favouritism, laziness and all other forms of moral irregularities capable of destroying the growth of a country.

Many for so long has attributed this practice to Africa alone. They believe that other continents and other countries in the world that are least corrupt are wise enough not to engage themselves in this improper attitude.

There is this belief that third world countries are filled with the most corrupt politicians, government officials, personalities and above all spiritual leaders. This is definitely wrong, as there are high numbers of corrupt practices across the world especially the western or developed countries.

This list is ranked based on the rate by which politicians of these corrupt countries makes unclean money, how government fails to put the interest of its citizens first, how the economic situation of each country remains stagnant and unproductive.

Below is a ranking of top 10 most corrupt countries in the world this 2022.

Somalia is the world’s most corrupt country this 2022 whose government doesn’t only enjoy but steals freely from the the country’s purse. One thing about the leaders in this country is that once they enter power, they find it hard to leave the seat of government once its tenure is over.

With its capital territory as Mogadishu, Somalia is a war torn country as they often engage in civil wars. It fought against other countries across its borders. The government also wage internal war against citizens who are trying to oppose its reign or people protesting against its rule.

Iran is another country with history of corrupt practices, extreme bribery and dictatorial rule. The current grand Ayatollah, Sayyed Ali Hosseini Khamenei is said to be an autocratic leader who is greater than the laws of their land.

Iran is an Asian country made up of over 39 million people whose citizens face so many challenges ranging from financial, educational emotional, and other forms of challenges. Citizens are always afraid due to the political unrest across the country. Iranians are not eager to go to school due to the fear of outbreak of war at anytime.

Sudan is ranked 3rd this year and is one country that has been battling corruption for a very long time. Despite its war against this menace, she still remains the most corrupt country in Africa and number 3 in the world.

Sudan is also one of the country that engages itself in wars but not as often as Afghanistan, Iraq and Iran. Sudan is located at the northern part of Africa with a population of approximately 43 million citizens. Its capital city is Khartoum.

Yemen is a relatively not too known country. Despite not having high population, the country still finds it difficult to feed its citizens.

The corrupt government doesn’t show great affection towards the welfare of its citizens but is only concerned with its cabinet’s purse and its personal interest. Sana’a is the capital territory of Yemen.

Uzbekistan is another Islamic country that is ranked among the most dangerous countries to live in. Due to constant bribes, nepotism and wars, the corrupt government officials channel the country’s wealth for their personal use.

As of today, CNN reports that the government of Uzbekistan has no time to monitor the affairs of the country to it maximum, instead made some ‘ghost dealing’ claiming to have bought weapons and tools to its military, which were found to be lies and deceit. Tashkat is the capital state.

This is another corrupt country ranked 6th with high level of corruption. Iraq is a war torn nation. According to Forbes, Iraq government officials have embezzled more than $2 billion USD within 2017 on projects that can’t be accounted for.

As a matter of fact, it is on record that the government over the years spent almost 30% of its revenue on fighting wars against neighboring countries instead of working for the country’s growth.

7th on the list of top corrupt countries of the world is Syria. This once religious country is currently ruled by Bashar-Al-Assad. He has remained in power for 17 years. Like his father before him, his quest to maintain absolute power has seen him kill most of his people, especially the opposition.

Al-Assad is also the richest man in Syria due to embezzling of the country’s natural resources. History has it that Syria has so many corrupted leaders whom only enrich their pockets to satisfy personal interests. its capital is Damascus.

Afghanistan is located at the southern part of the Asian continent with over 35 million citizens. This is another top corrupt country in the world with more than 2 billion dollars reported missing last year.

Afghanistan politicians are so corrupt that you hardly find one that takes the interest of the masses in heart. Embezzling funds has become official as the economic situation in the country is nothing to write home about. Its capital city is Kabul.

North Korea has been termed by the United States as an advanced prison. This is a country where fundamental human right is not recognised.

The self acclaimed supreme leader of North Korea, Kim Jon un is the law and has final say on all matters regarding the country.

It citizens live in fear as they are not allowed access to the internet, Facebook and even foreign channels. The country leader is deeply involved in corruption due to lavish spending by its government. Pyongyang is the capital of the country.

This is the second African country on the list of the most corrupt countries in the world. Guinea Bissau government hasn’t in anyway been helpful to the improvement of the country’s economy, cost of living and productivity.

Guinea-Bissau currently lacks some basic amenities which includes water, good road networks, shelter etc. The country is not that large. Feeding properly shouldn’t have been a problem but due to the corrupt minds at the helm of affairs, it citizens starve for food, die and live a life not worthy of their status.

You may want to ask “Why is Nigeria not on this corrupt countries list?”

The answer to your question is not far fetch; Nigeria is no longer rated among the top ten most corrupt country in the world. As we all know that the first and major thing the current government hates with passion is corruption.

As a result of this, Nigeria currently occupies the number 28th position on the list of most corrupt countries in the world. 2022