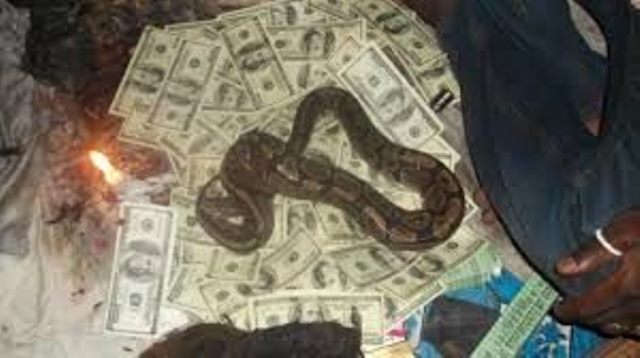 The history of Juju in Nigeria comes from the traditional African religion also known as voodoo. This practice involves the sacrifice of blood to make money and carry out spiritual attacks.

In Nigeria, out of desperation or for the love of money, some wicked men sacrifice the souls of their wives, children, friends, parents, and siblings just to be rich. The blood of these sacrifices are in turn used as money ritual in order to enrich such individual.

The money keeps coming as long as the individual continue to perform the human sacrifice. It is no surprise that most rich people in Nigeria including influential politicians today are suspected of using blood money either for protection or for fame and wealth.

Due to the advent of other religions such as Christianity, Islam, and so on, the practice of juju has declined as people are getting aware of the dangers of practicing black magic in Nigeria. Although, Juju practice is very popular in Benin Republic, no wonder it is considered “the motherland of voodooism”.

Aside from making money with Juju, another form of Juju is witchcraft which can be used to kill your enemies or make their lives miserable without physical contact. Hence, people escape the hands of the law.

There are those who believe that such occult powers do not exist and so dismiss anything that has to do with juju or black magic. Although, faith suggest that these powers are nothing to God Almighty, this does not mean they cannot harm mortal men when applied.

Voodoo as earlier written is part of Africa’s culture and traditions. People often see Juju as the bad part of voodoo which is used to mostly harm people. In Nigeria, voodoo practitioners or those who practice money rituals are mostly called herbalists or babalawo in Yoruba language. Although, herbalists are those who use combination of herbs from trees to cure diseases.

There are objects used by these Juju performers to perform these money rituals in Nigeria. The use of strange objects like the skull of dead animals, human skulls, calabash, candles, ash, kola-nuts etc to carry out these sacrifices. Apart from these, they also come up with impossible items to use for the sacrifice. Items like the ears of an ant, the kidney of a cockroach or the heart of a centipede are just but a few items that they task people to bring. All of which such individuals pay in monetary terms.

Finally, while we focus on Africa, Juju is also practiced in the western world also. The only difference is the name. For example, occult lodges such as the illuminati (already in Nigeria), Freemasonry, Church of Satan are just but a few that also practice money ritual and black magic.