Cooking is the preparation of food in readiness for eating, using heat to render tissues palatable, digestible attractive and safe for consumption.

Reasons Why do we need to cook our food

Generally, all cooking methods depend on one of the following principles:

This is a moist type of cooking method. The food are cooked in a covered water or stock. It is the most common method of cooking and also the simplest. With this method of cooking, the water is added to the food and it is then cooked on the fire. The reactions of the heated water or liquid starts to bubble vigorously and makes the food to get cooked. Examples of foods that can be cooked using this method are: yam, rice , maize etc.

Gentle boiling helps break down the tough (high) fibre structure of certain foods that would be less tender if cooked by other methods. When meat is boiled for long, the soluble meat extracts dissolve in the cooking liquid. Boiling should be slow to give time for the connective tissues in tough meat to change to soluble gelatine.

This reduces the fibres making the meat tender. If the connective tissue gelatinizes too quickly the fibres fall apart becoming tough and stringly. Gentle heat will ensure coagulation of the protein without hardening. Sufficient liquid should cover the article to be cooked.

Stewing is the slow cooking of foods cut into pieces in a minimum amount of liquid (water, sauce or stock) in a covered pot over low heat. The food is served with the liquid. This method has economical and nutritional advantage as it will render tender and palatable older, tougher and bigger cuts of meat or poultry unsuitable for grilling or roasting.

The success of cooking such foods depends on not allowing the liquid to get to very high temperature (boiling). Slow cooking by gentle heat (simmering) converts the connective tissue to gelatine so that the meat fibres fall apart easily and become digestible. The protein gets coagulated without over hardening and the soluble nutrients and flavours dissolve into the liquid all of which is served. Cheaper cuts of meat and certain fish dishes, poultry and vegetables are cooked by this method.

All stewing have a thickened consistency achieved by:

a. Cooking in the sauce e.g. Brown stew.

c. Encompassing ingredients in the stew e.g. fish stew. Stewed foods can be cooked in a covered pan on a . stove or moderate oven, the heat is lowered and the food allowed to simmer.

a. The meat juice that escapes from the meat during cooking are retained in the liquid which is part of the stew.

e. lt economizes labour since food can be cooked in bulk.

It is a slow method of cooking.

The long cooking period destroys some valuable nutrients in the food e.g. Vitamin C present in fruits and vegetables.

This is the cooking of prepared foods by steam (moist heat) arising from boiling water under varying degrees of pressure. Foods cooked by this method are mostly African dishes, like Beans pudding (moinmoin), Ukpo Oka in lbo orAfrican corn cake (shapala), others are egg custard, steamed pudding, fish and some vegetables.

Atmospheric or low pressure steaming. Direct cooking in a steamer or pot of boiling water e.g. steak and kidney pudding. Indirect method in a colander (between two plates) over a pan of boiling water.

High pressure steaming in a purpose built equipment which does not allow the steam to escape.

When food is steamed, the structure and texture is changed by chemical action, making it edible. The texture will vary according to the type of food, type of steamer and degree of heat. Sponges and puddings are lighter in texture if steamed rather than when baked.

This is cooking in fat or hot oil (moist heat). It requires constant and careful attention. Though not an easy method, it is quick but very unsuitable for tough meat.

1. Shallow Frying: This is when food is cooked in small quantity of preheated fat or oil in a shallow pan, on a flat surface or sauté pan. in the case of shallow frying, any fat or oil may be used (butter, margarine, vegetable oil, groundnut oil or palm oil) and as a general rule the side to be presented should be fried first. The food is turned and cooked on the other side e.g. Beef, fish, pancakes etc. but in certain cases. eg. Potatoes, they are tossed in the pan and the French term saute is here used in one of its forms.

a. It gives variety to the menu and diet by making the food palatable and safe to eat.

b. It gives food an attractive brown colour and interesting flavour.

Shallow frying is a quick method of cooking prime cut of meat and poultry in suitable fat or oil, heated to higher temperature without burning. As the food is in direct contact with the fat. it cooks rapidly.

This is cooking of food in pre heated deep oil or clarified fat. The selected fat should be raised to a high temperature without burning. The best oil for frying is olive oil but it is vegetable oil like cotton seed, palm oil, groundnut oil or a first class dripping or vegetable fat that is generally used. Food to be deep fried includes dodo, akara, puff-puff, burns, yam, doughnut etc. 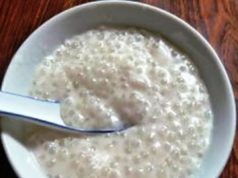 How To Prepare Tapioca (Recipe & Procedure) 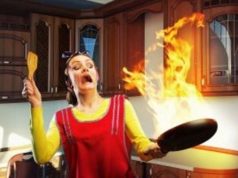 The Maximum Amount A Savings Account Can Hold in Nigeria (2020)