Nigeria has a well-developed print and electronic media infrastructure. As a colonial medium, radio was initially used primarily for channel linking. After a while, the service, together with television, assumed full control of depicting the Nigerian people’s day-to-day activities. The print media, on the other hand, has remained antagonistic, as was the primary intent of the media industry. However, in a normal developing society, the media should act as an institutional adversary to the government and all other authorities. Is that the case in Nigeria as well? Let’s look at the media regulating authorities in Nigeria to get an answer to this question. 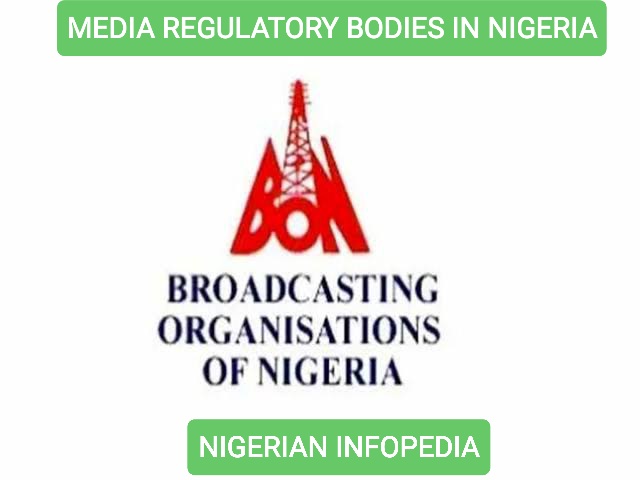 AN OVERVIEW OF MEDIA IN NIGERIA

Nigeria has always had the freest and most opinionated press of any African country. While newspapers and, more lately, blogging have long blossomed in Nigeria, radio and television have not gotten the same kind of attention. Due to a lack of finances and press limitations, the construction of radio or television services in Nigeria has slowed. Nonetheless, such limits have now been overcome in attempt to advance a bigger audience both within and outside of Nigeria, as evidenced by the rise of satellite television.

Furthermore, almost every Nigerian newspaper has an online presence. There are also other websites dedicated to allowing Nigerians to express their views on a number of topics. All of this contributes to the country’s sovereignty in the media space.

The recognized agencies in charge of media regulation in the country are listed below.

The Broadcasting Organisation of Nigeria, BON is a body that oversees both private and public broadcasters in the country. It is in responsible for supervising, coordinating, and managing Nigerian television, radio, and other media broadcasts. It is located in Abuja, Nigeria’s north-central region.

BON was established in 1973 and now has over 140 members that operate 250 radio and television stations. The Broadcasting Organization of Nigeria aspires to be the voice of the Nigerian broadcasting industry.

BON role is to create a conducive climate for radio, television, and new media broadcasters to serve their audiences and contribute positively to our society’s progress.

The Federal Ministry of Information and Culture is a Nigerian Federal ministry. The ministry’s mission is to deliver “reliable and timely information on government actions, programs, and initiatives” to Nigerian citizens. They also have the authority to build the technological environment in which Nigeria’s socioeconomic development may take place.

Normally, the President of Nigeria appoints a minister to lead the Nigerian Ministry of Information.

The Nigerian Television Authority (NTA) is the country’s largest television network, with stations around the country. It is largely regarded as the Nigerian government’s “true voice.”

The Nigerian Press Council is a parastatal that was established to ensure that the Nigerian press adheres to ethical norms and maintains high professional standards.

ALSO READ:  How to Get Death Certificate in Nigeria (2022)

The News Agency of Nigeria (NAN), much like Nigerian Television Authority, is a mainstream news agency owned and operated by the Federal Government of Nigeria. NAN was established in part to make news more widely available throughout the country and to the world community, as well as to refute bad tales about Nigeria.

A decree establishing the agency was signed into law on December 10, 1976, although it didn’t start operating for another two years. A board of directors was established in December 1978, and pilot reporting operation commenced on December 2, 1978.

Subscribers to NAN’s General News Service receive three daily bulletins. The website of the agency, www.nannews.ng, was established on December 8, 2016, to provide news to a global audience.

The Nigeria Union of Journalists (NUJ) is a group of journalists who have banded together to promote the safety and well-being of Nigerian journalists. It is a non-partisan trade organization with no political or ideological agenda. NUJ was created on the principle that as a professional body, we should speak with one voice. It advocates for freedom of the press, safety, employment stability, and fair compensation, as well as gender equality, freedom of association, copyright protection, and the elimination of all types of discrimination and repression.

The Nigerian Union of Journalists (NUJ) was created in Lagos on December 15, 1955, during Nigeria’s battle for independence from British domination. The Nigeria Labour Congress is its parent organization. It increased from 3,950 members in 1988 to 35,000 in 2005.

The Nigerian Newspaper Proprietors’ Association, or NPAN, is a specialized organization dedicated to the governance of journalism in the country. Nduka Obaigbena, a Nigerian journalist, columnist, and the founder of Thisday, one of Nigeria’s national newspapers, is the Association’s President.

One of the main responsibilities of the NPAN is to investigate complaints from the public against the press, as well as complaints from the press concerning the conduct of people or organizations toward the press. The Newspaper Proprietors’ Association of Nigeria (NPAN) serves as a barrier between the press and the general public.

That’s the view of the bodies and agencies that regulates the media in the country. This article gave an overview of these government agencies which oversees the activities happening in the Nigeria media space. That’s the size of this write-up.