Religion is a set of beliefs and practices that explains the relationship between human beings and a sacred powerful spiritual being. 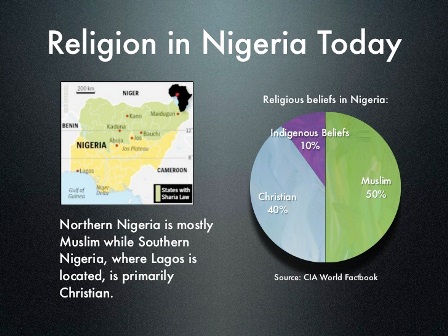 A given religion is elucidated by particular elements of a set of believers. Most of religions have grown starting from the onset based on the ideal history of the nation, of a wise man who spoke to the people a perfect way of life.

Religion in Nigeria plays an important role in the lives of the people. To some people it shows them direction in life, it gives them knowledge, wisdom, understanding, and insight.

Various religious belief today assist us to remain strong and stay focused. A leader that is religious is feared, respected, honoured and loved.

The country is somehow equally divided between Islam, Christianity and several other traditional practices. There are non-religious people, this is growing every day.

Religion varies for different states and regions. While Islam is predominant in the North, Christianity hold the majority in the South.

Christianity is the most sought after religion in Nigeria. It was introduced in Nigeria in the mid-nineteen century (19th) by devoted missionaries from Britain during the colonial era.

Christianity is based on the life and teaching of Jesus Christ and since its advent into Nigeria by British missionaries, it has expanded to almost every part of the country today.

ALSO READ:  The Current Cost of Clearing Cars in Nigeria Officially (May, 2022)

Aside preaching about the scripture, about the teachings/message of Christ (God), ministering to the people, conducting miracles and healing the sick, various denominations sprang up.

They started from the eastern area of Nigeria which is filled with the Igbos, meeting the village councils and chiefs, who gave them lands to build local churches and in turn they gave the chiefs gifts from overseas.

In no short time during the 1980s, Christian religion had spread to the southern region of the country, to the Yorubas and the middle belt (Benin).

As at the year 2005, there were over 40 million Christian population in Nigeria. As many protestants who strongly believe in the power of the Holy ghost as well as the Catholic, Baptist and Anglican churches. These denominations all believe in Christ but with different doctrines.

The history of Islam in Nigeria could be traced back to the old Borno Empire and also the Usman Dan Fodio era. This religion dates back to the 11th century.

Based on the teachings of Prophet Mohammed, it first gained ground in the Northern part of the country. Islam slowly found its way into the Middle Belt. Later the religion also became known in some of the South-Western regions.

The religion is practiced more in the North. It also has a huge number of devoted supporters amongst different cultural community. It is true that Nigeria is proud for having the biggest Muslims in Western Africa.

Islam covered across different local sects. A whole lot of followers belong to Maliki School of law that is the Sunni but also, some belong to Shafi’i madhab.

A lot of Sunni believers contribute in religious practices. They agree with Mouride, Qadiriyya, and Tijaniyyah, all these practices are parts of what is called the Sufi laws and orders that mix the religion with dancing and singing.

The Nigerian traditional religion is mostly moral. This is not a biblical doctrine since there is nothing like the Koran or Bible. It is mostly oral (oral tradition).

This type of religion is common to the African people in general even before the coming of the colonial masters.

Traditional doctrine started long before the advent of Christianity and Islam. It is focused on providing the rights here right now. It does not promise an after-life like some other religions do.

A lot of citizens honour their ancestors through ceremonies and rituals. Many of them prefer visiting traditional healers instead of doctors when they are sick or have a problem with anything.

Most people, by the way, follow the traditional religion along with one of the world’s major religions.