While the oil & gas industry seem to be the one of the major industries of the Nigerian economy, other sectors like banking, aviation, agriculture and health also have a say in cementing the country’s place as an emerging economic giant in the world. 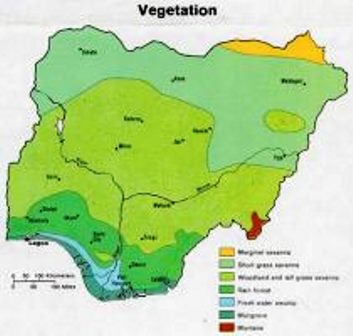 Presently, the Nigerian economy is ranked the largest in Africa based on her GDP. Aside some North African countries where oil can be found like Libya and Morocco, Nigeria is Africa’s leading oil producer, a feat which is threatened due to the incessant militant attacks on her major pipelines in the Niger-Delta region of the country.

Notwithstanding all these, Nigeria belongs to some notable international organizations like the African Union, the United Nations, OPEC and even the Commonwealth of Nations. All these bodies help foster unity, inter-dependence and establish trade and boost the important industries in the country.

Here are details of top 10 major industries of the Nigerian economy that contributes greatly to her GDP.

The banking industry in Nigeria has its roots traced to the colonial era when banks of old times were created by colonial masters to carry out trade on behalf of the colonial authority in those days.

Today, operations in the banking sector are currently controlled and regulated by the Central Bank of Nigeria which is headed by a governor.

Although, banks are financial institutions where people save or keep their valuables, today, top banks in the country are more involved in investing monies, assests to generate more revenue and interest.

Banks also contribute their part in boosting the economic development of the country. The banking industry is one area where financial transaction are carried out to facilitate local and international trade.

This is one main sector of the Nigerian economy that has been underrated for sometime. Research shows that agricultural farm produce in Nigeria has greatly improved over the years, outranking other African countries as one of the major producers of food in the continent and 6th worldwide.

The major agricultural products in Nigeria exported abroad that helps generate reveue include, corn, cassava, cocoa, millet, peanuts, palm oil, rice, sorghum, and yams. All these farm produce grow in different regions of the country due to the type of soil and favourable weather in the country.

The agricultural industry boomed during the 1970s. At this period, cocoa was the main foreign exchange earner for the country which helped improved other sectors of the Nigerian economy like the educational sector where scholarships where given out freely.

Even though Nigeria is more dependent on crude oil than agro-industry, agriculture is popular mostly in the rural parts of the country. In the North East for example are involved in cultivating onion, cotton, tomato, rice, sorghum and cassava.

Under the construction industry, we have top firms like Julius Berger, Dormalong, RCC and others all operating within the country.

These companies are in charge of building structures around the country. Structures like bridges, hospitals, road, buildings, houses, companies, stadiums, etc. These projects are mostly government oriented.

Consumer goods is a major industry in the Nigerian economy responsible for the manufacturing of products used by consumers.

In the health sector, the are registered companies that offer healthcare services all over the nation. Medical services ranging from dental care, eye treatment, medical checkups, x-ray services etc are just a few of the services provided by these firms

We can also add the pharmaceutical industry as part of the healthcare sector as they are responsible for supplying drugs as prescribed by doctors to patients.

Thanks to the ICT industry, Nigerians now use mobile phones, laptops, desktops and even surf the internet. The telecommunications sector has companies like MTN, GLO, Airtel and 9mobile.

These firms allow its users make calls and use data services to browse the internet which enables users connect with other people across the world.

This is the most important Industry in Nigeria today that generates 80% of the country’s revenue. Since crude oil was founded in 1958 at Oloibiri, the oil and gas sector has been the main source of the country’s wealth.

This dependence on oil has caused the economy of the country to decline in recent times. There have been calls by stakeholders to the government to diversify the economy and possibly revive other sectors in the Nigerian economy.

Both extraction, refinement, distribution and marketing of the oil and gas products are all done by major oil companies in this industry. Some of the major private oil and gas companies operating in the country are: Shell, Exxon Mobil, Chevron, Agip, Total, Texaco etc.

The entertainment industry in the country can be divided into two; one is the Nigerian film industry also known as Nollywood while the other is the music industry. Both have become vital to the growth of the Nigerian economy.

For the record, Nollywood is the second best entertainment industry in the world after Hollywood, producing movie stars known around the globe. The same can be said of the musical sector, which have produced celebrities like 2face, Davido, P Square, and Wizkid.

Thanks to the various cultures, ethnic groups, artifacts and languages in the country, Nigeria can boast of attraction/tourist sites to visit in various states of the country.

This particular industry help expose the cultural identity and diversity of the Nigerian population while contributing an estimated 10% to the country’s GDP.

The last major sectors of the Nigerian economy is utilities which include the power sector and water sector.

All Electrical DISCOS and water corporation are under this industry as these are essential to the survival of other sectors and industries.