Some of the rich Nigerian states have become main industrial centres in the country, boosting major sectors of the nigerian economy thereby putting the nation among the leading commercial countries in the map of the world. 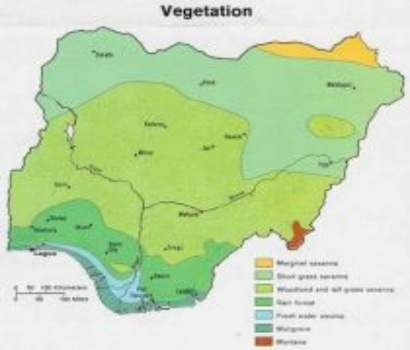 Although, there are 36 states in the federation, we list out the top 10 major industrial zones in Nigeria that have many investment opportunities to boost the country economically.

Lagos stands out as the most economically and industrialized state in Nigeria with virtually all top companies having their headquarters there.

You can find various industries in Lagos which contributed greatly to her internal generated revenue (IGR). The state is also leading in IT innovation and is the richest state in the country.

According to an online report, the Lekki Free Trade Zone in Lagos which was started during the administration of Bola Ahmed Tinubu is an area were goods may be landed, handled, manufactured or reconfigured, and re-exported without the intervention of custom authorities.

It is a region where a group of countries have agreed to reduce or eliminate trade barriers, the basic objective being to enhance foreign exchange earnings, develop export-oriented industries and generate employment opportunities for the host country.

Another industrialized centres in Nigeria is Ogun whose slogan is “Gateway to Nigeria”. Just like Lagos, you can find top manufacturing companies like Gee-pee tank, Apex paints ltd, Drury industries limited, etc.

On the map of the country, you would notice that both Lagos and Ogun state are located in south-west Geo-political zone in Nigeria.

Rivers state is also one of the most industrialized states in the country. Located in the South-south region on the map, Rivers is an oil producing state with an IGR only bettered by Lagos.

Its capital is Port-Harcourt which houses most of the major oil companies in the country like Shell, Total PLC, Chevron, Oando, etc. This shows that Rivers is a major stakeholder in the oil and gas industry in Nigeria. It is also on record that the due to the number of plants in the state, Rivers state remain the highest consumer of electricity in the country.

Anambra state is also a major industrial centre located in South-Eastern Nigeria. In fact, you will find the largest private indigenous oil refinery in the country in this state which is Orient Petroleum Refinery.

Aside that, it is documented that Anambra state has one of the biggest oil and gas exploration areas in Nigeria with so many natural resources. Some of the mineral resources found in Anambra include: crude oil and natural gas, ceramic, bauxite, etc.

Abia state is another South Eastern state in Nigeria with Aba as its industrial centre. When it comes to commerce and business in Igboland, you can count Aba among the top business cities to start a profitable venture in the country.

Historically, Abia was created in 1991 and like Anambra above, oil and gas production industries can be found there. You can also find prominent industries in the South East in this state.

Although, the agricultural sector in the state is what brings most of its Internally Generated Revenue as about 50% of its workforce are farmers, you would still see several industries like the cosmetics industry, footwear industry, cement industry, рharmaceutical industry and even textile industry.

Oyo state has one of the largest agricultural centers in the country that the first skyscraper to be built in Africa, i.e the Cocoa house is located in the state.

Also the largest tobacco companies in the country, Flour Mill of Nigeria and Seven Up Bottling Company are some of the popular companies in Nigeria are all located in Oyo state.

This is the most industrialized state in Northern Nigeria having over a hundred different industries within its territorial space. Some include: diary products, animal feed, vegetable oil, soft drinks, food, furniture, footwears, ceramics, рharmaceuticals, plastics, footwears, textiles, and cosmetics industries respectively.

Even though the agricultural sector is booming in this state with abundance of cash crops, the popular industry in Kano is the tie and dye industry. The Kurmi Market which serves as the most popular market in Northern Nigeria is known for selling traditional artifacts such as ancient carvings, jewelries, calabashes, pottery products, etc.

Akwa Ibom ranks as the highest oil and gas producing state in the country which is located in the coastal geographical region of southern Nigeria. For the records, the state has an airport and two major seaports.

Carved out from Cross River State in 1987, the first Electric Metering Industry in Nigeria was launched in the state.

Imo is an industrialized state in Nigera that is good for business. Owerri is its capital and can be seen as one of the hub of commercial activities in South Eastern Nigeria. With practically over 170 oil wells owned by the major players in the oil and gas industry such as Royal Dutch Shell, Chevron, Agip and Addax Petroleum, Imo state is a chief contributor to Nigeria’s economy.

Due to the federal presence Imo state enjoys, the FG recently launched the rice and cassava industry to boost the agricultural sector as it  started developing two rice plants, one cassava processing plant and one palm oil plant in Ehime Mbano LGA of Imo State.

Osun state is also on the list of major industrial zones in Nigeria that has business potential that can boost the country’s economy. Vegetation thrives in this area as the agricultural sector thrives better in Osun. The state is highly industrialized with companies like the Criss Cross Integrated Services, Samtop Paint Chemical Industries, Webring Integrated Services Limited, etc.

The presence of the Cocoa processing Industry, which produces over 19,000 tonnes of cocoa daily has helped curb unemployment in the country. We believe that if the federal government imports the right equipment backed with the right management of this industry, an increase in production should be made possible in the shortest possible time.