The Grammy Award is the most prestigious award in world music. It is awarded to the best singers in the world in different categories and over the years, some Africans have been awarded the prize for their contributions to music. This article seeks to let the reader know those distinguished Africans that have won the Grammy Award over time. 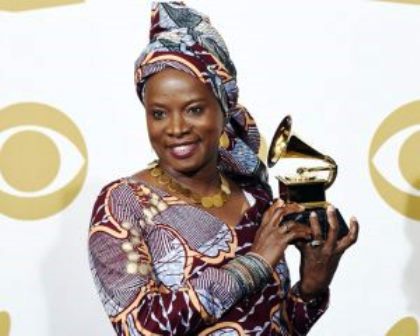 List of All Time African Grammy Award winners Till Date

Ladysmith Black Mambazo are a male choral group from South Africa who sings in the vocal styles of isicathamiya and mbube. They have been so consistent in delivering quality music that has seen them rack up 4 Grammy Awards over the course of time.

They broke into international limelight through their hit song Shaka Zulu, and thus, they received a warm welcome by the American audience which has helped open up doors to more successes. In 1988, Shaka Zulu won a Grammy for Best Traditional Folk Recording.

Angélique Kidjo is a talented and evergreen Grammy Award winning singer, songwriter and activist from Benin Republic, she is a role model for all who love good African vibes. She now has 4 grammy awards to her credit.

Ali Ibrahim “Farka” Touré was a singer and multi-instrumentalist from Mali, Toure died on December 7, 2006, at age 66 in Bamako, the capital of Mali from bone cancer.

The Soweto Gospel Choir is a band of more than 30 members. The band was birthed by two choir directors, David Mulovhedzi and Beverly Bryer.

Their first Grammy Award for Best Traditional World Music Album in 2007 and 2008 respectively with their albums Blessed and African Spirit was won. In 2010 composer Christopher Tin’s song “Baba Yetu”, which featured the band, won the Grammy Award for Best Instrumental Arrangement Accompanying Vocalists.

Youssou N’Dour is of Senegalese origin. He toured internationally for thirty years. In 2005, he won the Grammy Award for Best Contemporary World Music Album.

It is also noteworthy to state that he was Senegal’s Minister of Tourism and Culture from December 2012 to December 2012.

ALSO READ:  International Money Order in Nigeria: Where & How To Get It

This band of Tuareg musicians from the northern region of Mali was formed in 1979 in Tamanrassset, Algeria. Their first public attraction outside the Sahara came in 2001 with the release of The Radio Tisdas Sessions, and with performances at Festival au Desert in Mali. They won the Grammy award for Best World Music Album at the 54th Grammy Awards, in 2011 with their fifth album, Tassili.

This South African flutist and music composer won the Grammy for Awards for Best New Age Album in 2015. He has fixed his attention on World and Roots music, exploring the uniqueness of the instrument, mixing classical and contemporary tunes.

Nigerian musician, Burna Boy has become the first Nigerian to win the Grammy Award for Best World Music Album with his album “Twice as Tall”. He joins Starboy  as the only two Nigerians to ever win the Grammy this 2022.

Wizkid is also among the musicians in Nigeria that have won the Grammy Awards due to his contributions in the Nigerian music industry. It was his collaboration with Beyonce “Brown Skin Girl” that earned him his first ever Grammy Award.

From the above the African to have won the most Grammy award is Ladysmith Black Mambazo. There are only three Nigerians in history to have ever won the Grammy award and they are Wizkid, Sade and Burna Boy.

This is the all time list for African singers who have won the Grammy Award currently. Use the comments section below to air your views.