Nigeria is unquestionably filled with stunning, sizable towns and villages. There are wonderful communities bursting with historic charm and natural beauty in every area and state. We’ve compiled a list of some of the biggest little towns in the nation, with something for everyone. Each of these towns and villages has no fewer than 15,000 residents and is large enough to qualify for this post. 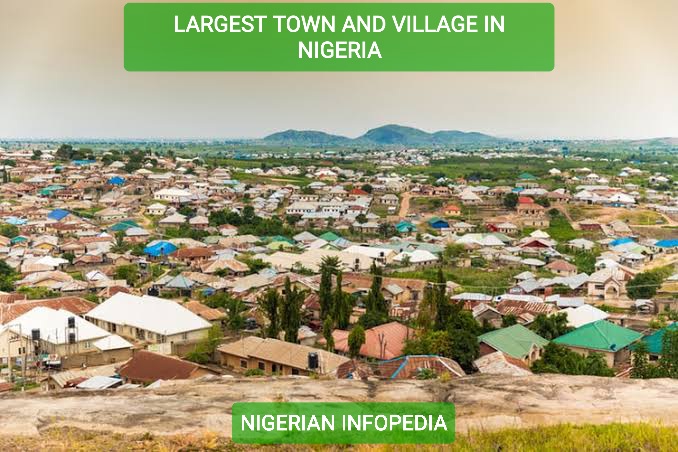 LARGEST TOWNS AND VILLAGES IN NIGERIA

The top villages in Nigeria according to size, area, and popularity are shown below.

The largest village in Nigeria and all of West Africa is known as Ugep. One of the largest units that make up Yakurr is this one. The Lokaa Language, which is the main tongue of Yakurr, is spoken by the natives of Ugep.

The town or village known as “Akpa” is where Ugep first appeared. This is in Nigeria’s Cross River State’s Central Senatorial District’s Eastern Ejagham region. Due of a religious conflict between the two paternal families that make up Apka, the residents of Ugep departed Akpa. This occurred during the conduct of ritual ceremonies following the death of a member of either tribe.

Presently, Ugep/Yakurr are exceptionally unique and enviable given the amount of serenity and comfort. These people are made up of superb, life-filled men and women, and their estimated total land area is thirty and a half square kilometers.

Today, Ugep has the distinction of serving as the seat of local administration. The inhabitants of Ugep are among the most politically aware, daring, intelligent, enlightened, liberated, egalitarian, hardworking, and resourceful people in Cross River State. Additionally, they develop become courageous leaders in Nigerian politics.

Good tourism destinations may be found in Ugep/Yakurr. These are excellent locations that will encourage you to visit the biggest village in Nigeria.

Due to its vastness and attractiveness, Abriiba town has the moniker “small London.” The inhabitants of this town are descended from the Calabar Igbo and Efik people. The latter migrated ages ago from the upper Cross River region. They first just inhabited a small area, but as time went on, they advanced into the nearby Nkporo community and seized their properties.

Abiriba people were warlike and moved fast into the regions. The Yakor tribe of Ekoi of Cross River and the people of Arochukwu share a common ancestor with the Abiriba people, according to historical evidence.

They are reputed to be diligent. Due to the fact that their dry regions make it impossible for agriculture to develop, they are both skilled in crafts and trade. They are well-known for the sculpture and blacksmithing artifacts they produced in prehistory. Due to the fact that it has become their hallmark, this occupation has made them famous today.

In the Edo state, Uromi is more like to a kingdom. This is a monarchy, with a king [Enijie] in charge of managing the affairs of the realm. This kingdom has a hereditary royal family form of government. The monarch who is ruled by chiefs is known as the king. They support the monarch while he governs the realm. When Ichesan received the kingship from the Bini Monarch Oba Ewuare in 1463, the kingdom grew stronger (first Onojie of Uromi). Since that time, the kingship has been passed down through inheritance.

Over 400 years have passed since Nnewi’s empire flourished. The kingdom, which is divided into the regions of Otolo, Uruagu, Umudim, and Nnewichi, is thought to have been established about the fifteenth century. Each quarter is further divided into umunna, or family groups, with the obi being the first family in each umunna.

Tradition dictates that generations transmit down the origin and history of Nnewi orally from their ancestors. The majority of it, which was rich in mythology, involves the participation of the bush rat known as ewi, which was thought to have saved their ancestors in the past. This may possibly be the reason why killing ewi or eating bush rat is frowned upon in Nnewi among natives.

Ogbia is a little hamlet in Nigeria’s Bayelsa State, which is part of the Niger Delta. It has 179,926 residents and is highly known for its historical significance.

Oloibiri, where oil was initially discovered on January 15, 1956, is part of the Ogbia local government region. Most of the people who live in Ogbia territory are farmers and fisherman. It is noteworthy that Goodluck Ebele Jonathan, a former president of Nigeria, was born in Otueke, Ogbia.

The Ilesha people are exceptionally skilled in business and have established themselves as the creators of the “osomalo” industry. This is a well-liked trading technique that enables buyers to pay for things incrementally.

This town, also known as Ikerre, is a hub for agriculture. The community is situated halfway between Ikogosi, a tourist destination known for having both cold and warm springs, and Ado-Ekiti, the state capital of Ekiti. Ogoga of Ikere-Ekiti is the title used to refer to Ikere’s traditional monarch. The College of Education, Ikere-Ekiti, is located in Ikere.

Nigerians refer to villages as clusters of inhabited areas or communities. The country is without a doubt endowed with expansive countryside and villages. The majority of these settlements are heavily dependent on agriculture. Nigerian villages differ from one another due to regional and cultural variances. The largest and most notable villages in Nigeria were highlighted in this article.

But take note that a few locations declare themselves to be the biggest villages in the nation. This distinction between a village and a town is not widely accepted, and the term “largest” might refer to either population or area.