With Nigeria being presently the second largest producer of natural rubber in Africa, it’s certainly the contribution of the producing states that makes the country reach this feat.  Rubber is basically an essential agricultural products and cash crop that has a lot of uses. The availability of the raw material in Nigeria has make the country to be known for that. In this article, we will look at the leading states in Nigeria in terms of rubber production. 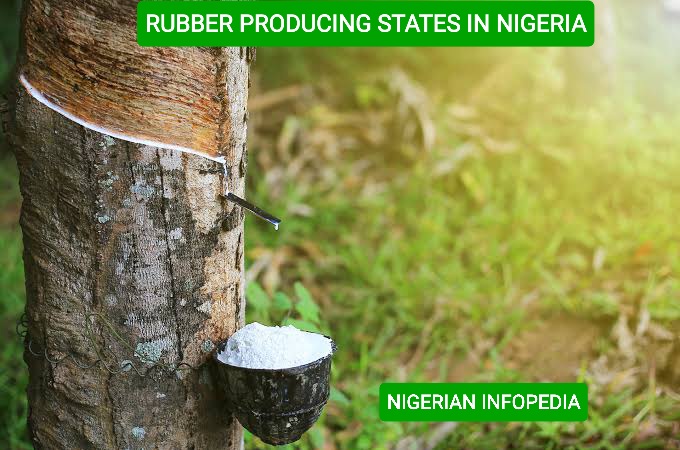 Nigeria is also the world’s second largest producer of natural rubber, and exports about 60% of its production. The country produces more than seven million metric tons annually and has a well-established export market in Asia. However, most rubber producers are located in the southern region of Nigeria where they can take advantage of low labor costs and proximity to ports for shipping.

Moreover, rubber is mostly produced in the southern part of Nigeria and the major rubber producing states comes from this region of the country. One of the influencing factors for the crop existence in the southern region is due to the presence of high rainfall that is experienced there. Rubber is commercially grown in Edo, Ondo, Ogun, Delta and Cross River states. These are the top producers of the cash crop in the country.

However, the crop is also been grown in Abia, Anambra, Akwa Ibom, Rivers, Ebonyi and Bayelsa states. All of these areas will make our top ten list of largest rubber producing states in Nigeria as we will respectively highlight them in details.

Just as we have said that rubber is mostly grown in the southern part of the country, that’s the case here as the following largest rubber producing states are all in the region. The review of these states will cover their respective rubber output, plantation, and the current state of rubber production.

The following are the top ten leading producers of rubber in the country accordingly:

Edo State is the leading state with respect to rubber production in the country. The state is situated in the rain forest vegetation of the country, which supports the existence of this cash crop. Just like the whole of western Nigeria, rubber is grown in Edo State in large quantity.

Ondo state is also one of the largest rubber producing states in Nigeria. The state has a lot of rubber plantations which which made them to reach an annual production volume of 60,000 metric tonnes.

There are lots of industries operating in the South-western state. The Rubber Estates Company Nigeria is one of such as there are many more in the state. Ondo is one of the leading states in Nigeria with respect to conmercial production of agricultural produce. The state is the largest producer of cocoa in the country.

Cross River State is the third largest producer of rubber in Nigeria. The state government and some agricultural agencies are putting efforts to augment the productivity of rubber in Cross River. About 21,545 hectares of land is currently under rubber cultivation in the State.

Cross River State has an average latex yield of about 1.5 MT/Ha, and it currently produces about 30,000 metric tons of latex on a yearly basis.

Rubber is mostly grown in Sapele Local Government Area of Delta State. The area accounts for about half of the state’s rubber production output. Delta State is situated in rain forest and mangrove swamp forest vegetations which supports the growth of rubber. The state produces a significant metric tonnes of rubber in a year and their production rates earns them this position as one of the most producers of rubber in Nigeria.

The production of rubber in Ogun State have been fully supported by the state government. Local farmers were allowed with lands to complement the productivity of the agricultural produce in the state.

Abia State is one of the leading producers of rubber in the country. In a survey report in 2018, the figure of rubber production in the state stand at 35,000 metric tonnes annually.

A good part of the state has commercial quantities of rubber which are mostly exported for industrial use. Though the cash crop is not grown in all areas of the state, however the government is making efforts to improve these figures.

Akwa Ibom is a coastal state in the southern part of the country. Though some part of the state is swampy, however the production of rubber is mostly in the northern areas.

In a bid to augment this production of rubber in the state, the government is joining hands with relevant agencies to take the local production of the cash crop to another level. This is seen as there is an adoption of improved rubber production technologies by rubber plantation farmers in Akwa Ibom State.

On the whole, Akwa Ibom has a significant metric tonnes of rubber produced on a yearly basis. The state is currently the largest producer of petroleum and as well oil palm in the country.

This is notable igbo state in the production of rubber in Nigeria. The state is situated in the South-eastern part which for the most part lies in the rain forest vegetation of the country. This area supports the existence of rubber plants which makes the state earn this position as one of the highest producers.

Rivers State has a good number of rubber plantations. This includes the local ones which is most prominent in the state. With that being the case, the state government is making efforts to make the plantation of rubber in Rivers State go beyond the local production.

Farmers and agricultural industrialists are allotted lands and empowered with what is needed to increase the productivity of rubber in the area.

Bayelsa is a coastal state that is for some parts covered with water. The nature of the region has by and large influence the production of rubber. Basically, rubber is a crop that do well in moist soils. The result of this fact is shown as Bayelsa yield a good volume of latex in metric tonnes. The government of Bayelsa state are also making efforts to increase the productivity of the agricultural produce in the area.

That’s the size of this article on the top ten largest rubber producing states in Nigeria. This list showed the leading states in terms of production of the cash crop and were also ranked based on their individual yield of the agricultural produce.