Lagos is the leading state in terms of industry, infrastructure, development and commerce. As an urbanized area, there are many towns situated in it. In this article, we’ll list all local government areas in Lagos state and the towns located within. 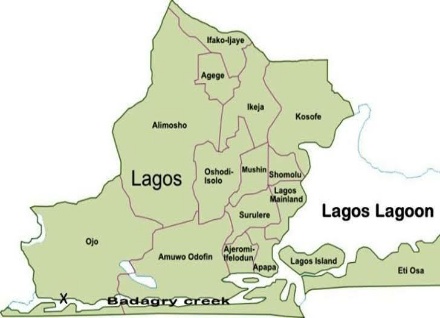 Lagos state came into existence on July 27th, 1967, when it was created as a distinguish state. The state got it name ‘Lagos’  from the Portuguese who adopted the name from a town in Portugal. Initially, it was known as Eko which referred mainly to the Island.

Lagos state is the smallest state in Nigeria in terms of land area. Hence, it has the highest urban population, which is 27.4% of the countries population. The state is the most commercial urban area in the country, and it has a large number of industries which augment the state’s economy.

The people of Lagos state is made up of different ethnicities within and outside the country. Yoruba is the indigenous ethnic group in the state, with other tribes like the Aworis, Ogus, Edos, Saros, and other residential tribes also making up the state.

With respect to religion, Lagos State has a rational number of Muslims and Christians, but Christianity edges other religious groups in the state.

List of Local Government Areas and Towns in Lagos State

Here is a rundown of the different local government areas and towns in Lagos State:

Agege LGA is an urbanised area in the State. It has an administrative  headquarter in Agege town. The area is made up of many towns and notable districts which include: Isale, Idimangoro, Iloro, Onipetesi, Oniwaya, Papa-Uku, Agbotikuyo, Dopemu, Oyewole, Papa Ashafa, Okekoto, Keke, Darocha, Tabon, Oko Oba, Orile Agege, Oko Oba and Isale Odo

Ajeromi/Ifelodun LGA is one of Lagos State local government area. Headquartered in Ajeromi-Ifelodun town, there are many urban centres and districts in the LGA. They include: Ago Hausa, Awodi-Ora, Wilmer, Olodi, Tolu, Temidire I, Layeni, Alaba Oro, Mosafejo and Temidire II.

Amuwo-Odofin LGA is one of the twenty local government areas in Lagos State. Headquartered in Festac Town, there are many urban areas in the LGA. They include Festac Town, Kirikiri, Amuwo, Ijegun, Satellite, Irede, Ibeshe and Igbologun.

Apapa LGA is one of the renown local government area. It is situated in the shoreline, and houses the Apapa Seaport. Apapa town is the headquarter of the LGA. However, there are many othe urban centres like Tincan/Snake Island, Ijora-Oloye, Olodan. Olojowou, Olatokunbo, Iganmu, Gaskiya, Afolabi Alasia and Sari environs, which make up the local government area.

Badagry LGA is a notable local government area in Lagos State. Badagry town is the headquarter of this LGA. The Badagry area is very developed and it has a lot of towns situated in. The following is the list of notable towns and districts in Badagry LGA: Posukoh, Awhanjigoh, Ibereko, Keta-East, Iworo Gbanko, Ajido, Ilogbo-Araromi, Ikoga, Ajara and Iya-Afin.

Ikeja LGA is the capital local government area in Lagos State. It is equally the most dense and developed among the other local government areas. Ikeja LGA is headquartered in the central part of Ikeja city. Towns and districts in the area include: Anifowoshe, Ikeja, Ojodu, Agidingbi,­ Omole, Alausa, Oregun, Olusosun, Airport/Onipetesi/Onilekere, Ipodo, Seriki Aro, Adekunle Vill./Adeniyi Jones, Ogba, Oke-Ira, Aguda, Onigbongbo, Wasimi and Opebi.

Lagos Mainland LGA is one of the local government areas in Lagos State, and has an headquarter in the central part of the area. Notable towns and districts in the area include: Otto/Iddo, Olaleye Village, Maroko, Ebute Metta, Glover, Oko-Baba, Oyadiran Estate, Abule-Oja, Alagomeji, Iwaya, Yaba and Igbobi.

Mushin LGA is one of the stand out local government area in Lagos State. Headquartered in the centre of Mushin town, there are many urban centres and districts in the area. They include: Mushin, Alakara, Odi-Olowu, Babalosa, Ojuwoye, Ilupeju, Olateju, Kayode/Fadeyi, Atewolara, Papa-Ajao, Ilasamaja, Babalosa, Idi-Araba, Itire, Ilupeju Industrial Estate, among others.

Ojo LGA is a local government area in Lagos State. It has an administrative LG council in Ojo Town. Other notable towns in the area include: Okokomaiko, Ajangbadi, Ijanikin, Iba, Irewe, Tafi, Etegbin, Idoluwo and Sabo.

Lagos state is unarguably the number one destination for visitors in Nigeria. The state has lots of oppurtunities, urban areas, residential areas, tourist attractions, and as well security all through.

Lagos state can also boast of educational institutions, social amenities, and many other things that a developed city should posses. All these makes the state’s slogan the ‘Centre of Excellence’.

This article listed all local governments areas in Lagos state, and the towns that are situated in them. This will give you options on where to go in Lagos, Africa’s largest urban area.