Kwara is one of the states in Nigeria. It has a capital in Ilorin, a renown town. The state has some other notable urban areas situated in local government areas. This write-up will list out the sixteen LGAs of Kwara state and the towns in it. 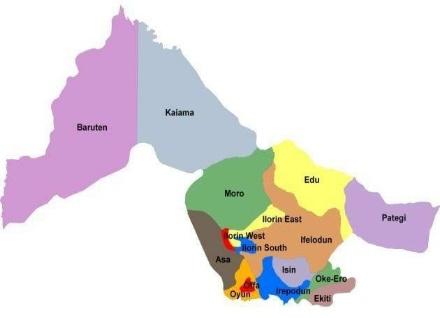 Created on 27th of December, 1967 by the Federal Military Government of General Yakubu Gowon, Kwara state is one of the oldest states in Nigeria. The name “Kwara”, is a local name for the River Niger. Kwara state is located within the North Central geopolitical zone of the country.

The Yoruba people make up the najority of Kwara State occupants. The primary ethnic group is Yoruba, with significant numbers of other tribes like Nupe, Bariba, and Fulani minorities.

Kwara state is situated in the Guinea savannah vegetation which favors agricultural activities. As such, agriculture is the main source of the state’s economy. A commercial quantities of cash crops like: cotton, cocoa, coffee, Kolanut, tobacco, beniseed and palm produce are found in the state. Morover, the state also posses a large quantity of sugars, which make a lot of industries in this sector to be prominent in the state. Mineral resources in the state are Petroleum, Gold, limestone, marble, feldspar, clay, kaolin, quartz and granite rocks.

List of Local Government Areas and Towns in Kwara State

Below are the towns situated in these local government areas:

Asa LGA, situated in the western region of Kwara State is one of the Local Government Areas of the State. It has an headquarter located in the town of Afon. Notable towns in the area include: Afon, Yowere, Owode, Onive, Odo-Ode, Aboto, Ogbondoroko, Reke, Ila-Oja, Otteh and Ago Oshin.

ALSO READ:  List of Available Business Grants in Nigeria & How To Apply (2022)

Baruten LGA is one of the local government areas in Kwara state. It has an administrative headquarter in the town of Kosubosu, with prominent towns, districts and villages of Baruten, Boriya, Gure, Gwasoro, Gwanara, Kenu and Kpaura also in the area.

Edu LGA is a Local Government Area in the state. Lafiagi town is the headquater of Edu LGA. Other towns in the area include: Tsaragi and Isonga. There are also districts and villages which make up the area.

Ifelodun LGA is a local government area in Kwara state. It has an headquarter in Share town and the local council is made up of towns, districts and communities of Igbaja, Idofin, Agunjin, Ile-Ire, Oke-Ode, Omupo, Ora and Share.

Ilorin South LGA is a renown Local Government Area in Kwara State. Situated near the state capital, it has an administrative headquarters in Fufu town.

Other notable urban areas include Akanbi, Bologun-Fulani, Okaka and Oke-Ogun.

Isin LGA is a well known local government area in Kwara state. Owu-Isin town, where the area got it name is the administrative headquarter of the local government area. Other towns in the area include: Isin-Sabja, Isin-Olla, Oke-Onigbin, Oke-Aba, Isin-Owo, Isin-Isanlu, Isin-Ijara and others which incorporate the area.

Kaiama LGA is one of the largest Local Government Area in Kwara State. It is situated in the northeastern part of the state and it has Kaiama town as the administrative headquarter. Urban areas in the area include: Adena, Bani, Gwanabe, Gwaria, Kemanji, Wajibe, Kaburu, Gwanagaji and Woro.

Moro LGA is a prominent Local Government Area in Kwara state. Moro Town, which the area got it name, is the administrative headquarter. Notable urban areas in Moro LGA include the following: Moro, Alara, Ajanaku, Arobadi, Babadubu, Bode- Saadu and many others.

Offa LGA is a developed Local Government Area in kwara state. Headquartered in the renown town of Offa, there are other towns that make up the area. Notable districts and urban areas in the area include: Offa, Balogun, Essa, Shawo Central, Shawo East, Shawo West, Ojomu Central, Ojomu South-East and Ojomu North-West.

Oke-Ero LGA is one of Kwara State Local Government Area, and it is headquartered in the town of Iloffa with Odo-Owa, Ekan Nla, Ayedun, Ilale, Erin Mope, Egosi, Imode and Idofin Odo-Ase being the urban areas in the area.

Pategi LGA is in list as one of Kwara State Local Government Area. Headquartered in the remote town of Pategi, there are other urban areas like Lade and Kpada which make up the area.

Kwara state is one of the significant places to visit in Nigeria. Intriguing tourist attractions in the state include the popular Esie Museum, Owu waterfalls, Imoleboja Rock Shelter,  Lake National Parks and the fascinating Agbonna Hill Awon Mass Wedding in Shao. Aside from these few attractions, the state is home of lots of educational institutions and industries that aid the state’s economy.

Ilorin city the state capital, is the most urbanised area in Kwara State. This does not exclude other towns, as this article enumerated the towns and local government areas in the ‘State of Harmony’.