Kogi state is one of the 36 states in Nigeria. It is well known for having the confluence of the River Niger and Benue. Lokoja city, the state capital is the town where the two rivers meet. In this write-up, we’ll enumerate the towns and local government areas of ‘The Confluence State’. 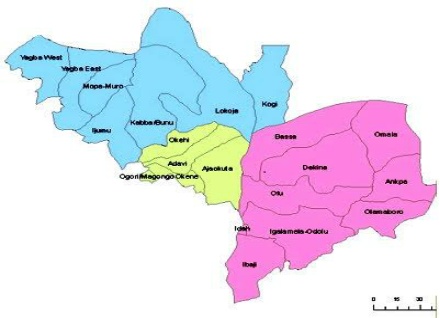 Kogi state is a central state and is situated in the Middle-Belt region of Nigeria. The state is significant for having the confluence of River Niger and River Benue at its capital, Lokoja. This make it to be popularly called the confluence state.

In terms of economic activities in the state, Agriculture is the main contributor of the state economy with fishing in the riverine areas like Lokoja, Idah, Ibaji, and Ogugu. There are also notable mineral resources in Kogi state which include coal, petroleum, limestone, steel and others.

The main ethnic groups of the state are Igala, Ebira, Bassa Nge and Okun.

List of Local Government Areas and Towns in Kogi State

Dekina LGA is a Local Government Area in Kogi State and it has an headquarter in the town of Dekina. Other notable towns in the region include: Birdu, Dekina, Okura, Egume, Adoma, Ajebido, Adum, Agada, Agbajo, Agidibai, Agojeju, Ahojori and Aje-Kelega.

Idah LGA is one of Kogi State list of local government area. Though small in size, the Local Government Area is quite popular and has some notable urban areas in it. Ede, Ega, Ichala, Igalaogba, Igecheba, Ogegele, Owoli Apa, Ogegele, Igacheba, Igalaogba and Ichala towns are the notable places in the area.

Kogi LGA is one of the LG area of the State. The state’s name is gotten from this and it has an headquarter in Koton Karfe. Other notable towns in the area include: Abuse Bassa, Achabo, Acheni, Adaba, Adabode, Adagima, Adama, Adamuro-Bassa, Adanya, Adigi-Gwari and Adiho.

Lokoja LGA is the is headquartered in the centre of Lokoja city, the capital of Kogi state. Notable towns and urban communities that make up the area include: Kakanda, Kupa, Lokoja Rural, Oworo, Akpayan, Eban Kaci,Aledu, Ayinoke, Banda, Abugi, Agini, Angbapu, Arakpo, Awumi and Bagi.

Ofu LGA is a renown Local Government Area in Kogi State. It has an administrative headquarter located in the town of Ogwoawo. There are towns in the area which include: Gwalawo, Igala, Aloji, Ejule, Etakwu, Igo, Ofoke, Ogbonicha, Iboko, Aloma, Itobe, Ogwa and Ugwo-Lawo.

ALSO READ:  How to Register a Drug Product in NAFDAC + Requirements (2023)

Yagba East LGA of Kogi State has an headquarter in Isanlu town. The local government area has many urban centres, and they include the following Amuro, Iddo, Idofin, Ijowa, Ilafin, Irunda, Isanlu-Itedo, Isanlu- Makutu, Isanlu-Mopa, Iye and Lofin.

There are many things in Kogi State which makes the place worth going. Tourist attractions in the satate include the Lord Lugard House, Mount Patti, World War Cenotaph, the confluence of Rivers Niger and Benue, and natural land features like hills and terrains are the few to mention attractions. The State is also well connected and it just adjacent to Abuja City, being a 2-hour drive.

This write-up provided a guide by encapsulating the towns and local government areas in Kogi State.