There are many urban centres in Kebbi State. Birnin-Kebbi city, the state capital is the significant town in the state. In this article, we’ll enumerate the all towns situated in Kebbi state local government areas. 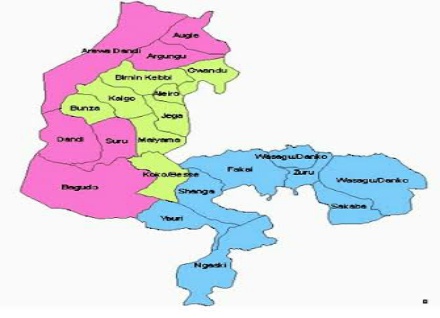 Situated in north-western Nigeria, the state has a total area of 36,800 km², and is bordered by Sokoto State, Niger State, Zamfara State, Dosso Region in the Republic of Niger and the nation of Benin. Kebbi state was created in 1991 from Sokoto State, to become a state on it own.

The State is mainly occupied by Hausa people, with some members of Fulani, Lelna , Bussawa, Dukawa, Dakarkari, Kambari, Gungawa and Kamuku ethnic communities still making up as minor tribes. On religion, Christianity and Islam are the significant religions in Kebbi State, with Muslims making up 80% of the state population.

Kebbi State has a diverse economy, with agriculture being the main occupation of the people especially in rural areas. Commercial crops produced in the state are mainly grains; animal rearing and fishing is also in the state. The state also has a considerate anount of oil deposits.

List of Local Government Areas and Towns in Kebbi State

A total of twenty-one (21) local government areas make up Kebbi State. There are up to 225 political wards, 3000 settlements and the State hass four emirate councils (Gwandu, Argungu, Yauri and Zuru), and 35 districts.

The LGAs and towns in Kebbi State are as follows:

Aliero LGA is a notable local government area in Kebbi State. It is headquartered in Aliero town, where the area got it name. Other towns and districts in the area include: Aliero, Sabiyal, Dangaladima I & II, Fada I & II, Danwarai, Jiga-Makera, Kashin Zama and Rafin Bauna.

Dandi LGA is in list as one of the Local Government Areas of Kebbi State. It has an administrative headquarter in the town of Dandi, with other towns like Kamba, Buma, Dolekaina, Fana, Shiko, Kwakwaba, Kyangakwai, Maigwaza, Maihausawa, Bani-zumbu, Danyaku, Fingilla, Galaru, Geza, Kokani, Kuka, Kutu Kullu and Maidaji making up the area.

Fakai LGA count as one of the Local Government Areas of Kebbi State, and it headquarter is located in the town of Mahuta. Urban areas in this LGA are Gulbin Kuka, Inga, Kangi, Kelle, Magaji Fakai and Mahuta towns.

Zuru LGA is a remote local government area in Kebbi State. It has an headquarter in the commercial town of Zuru, which the area got it name. There are other towns like Bedi, Zodi, Tadurga, Seme, Senchi, Ciroman, Dabai, Isgogo, Dago Manga, Ushe, Rafin Zuru, Rikoto, Rumu and Doben in the LGA.

Kebbi state is very known for their intriguing traditional festivals. Few to mention include the popular Argungu Fishing Festival which is now on an international scene; the Uhola Festival is also an attractive cultural display in the state. Aside from these, there are lots of other tourist attraction sites, and complementing with robost economic activities to interest you visit Kebbi state.