Katsina state is located in Northern Nigeria. The popular Katsina city is the most prominent town in the state. This write-up will list all towns that are situated in the thirty-four local government areas of Katsina state. 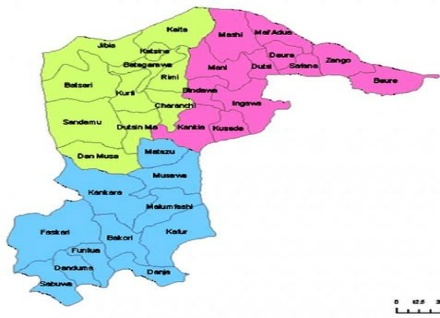 Katsina state was created on Wednesday, 23rd May, 1987 by the military rigime of General Ibrahim Babangida. It occupies an area of about 23,938sq kilometers, and borders Kaduna state to the South, Jigawa and Kano States to the East, Zamfara State to the West and the Niger Republic to the North.

Katsina state has an estimated population of 5,792,578 people, based on 2006 census, and this make them one of the most populated states in the country. Hausa and Fulani are the major tribes in the state, with Islam being the predominant religion. Languages spoken in the state are Hausa and Fulfulde respectively.

Katsina state is very much inclined to agriculture, due to the enabling environment there. This is the main occupation of the people here as it is an economic work for all and sundry. The major crops grown in the State include, Millets, Guinea Corn, Groundnut, Maize, Cotton, Rice, Yam, Cassava, Sugar cane and Soya beans which are in commercial quantities.

List of Local Government Areas and Towns in Katsina State

Below are all thirty-four (34) local government areas in Katsina state, and the respective urban areas or towns within them:

Bakori LGA is one of the thirty-four local government areas of Katsina State. Headquartered in the town of Bakori, there are other towns in the area. They include the following: Kakumi, Kandarawa, Kurami/Yankwani, Tsiga, Kabomo, Jargaba, Guga, Dawan Musa, Magaji, Kwantakwaram, Gazara and Barde.

Batsari LGA is headquartered in the town of Batsari, the most remote area in the LGA. Other notable urban areas in the area include the following: Kagara, Abadau, Batsari, Magaji, Kandawa, Karare, Madogara, Manawa, Ruma, Wagini, Yauyau/Mailamawa and Yangaiya.

Baure LGA of Katsina State has its administrative headquarter in Baure Town, where the area got it name. Notable urban areas in the area include: Agala, Baure, Garki, Kagara, Mai-Bara, Taramnawa, Yanduna, Unguwar, Muduri, Babban-Mutum, Yanmauuli Rai and Hui.

Dan-Musa LGA of Katsina State has an administrative headquarter in Dan-Musa town. There are other notable urban areas in Dan-Musa LGA. They include the following: Dan Ali, Dan Alkima, Dandire 1 & 2, Dan Musa 1 & 2, Mai Dobino 1 & 2, Mara and Yantumaki.

Dandume LGA is a local government area in Katsina State. It has an headquarter in the town of Dandume. Towns in this are include: Magaji Wando 1 & 2, Dandume 1 & 2, Mahuta 1 & 2, Nasaarawa, Tumbarkai, Dan-Soda, Dantakari, Ilalla, Jiruwa, Magaji-Wando, Mahuta and Mai Kwama.

Danja Local Government Area of the state has its administrative headquarter in Danja town. Other notable towns and communities in the area include Dabai, Danja, Jiba, Kahutu, Tandama, Tsaugamuwa (Tsangamawa) and Yakaji.

Dutsin-Ma LGA is a prominent local government area in Katsina state. The developed town of Dutsin-Ma, which is the administrative headquarter of the area,  houses a Federal University. Other notable urban areas in the area include: Bagagadi, Dagelawai, Dan-Ali, Dorawa, Katanga, Dabawa, Kagara and Rayi-Faguwa.

Ingawa LGA is one of the thirty-four local government areas in Katsina state. The area has Ingawa town as it administrative headquarter, with other urban areas like Agayawa, Bidore, Dara, Yaya, Dugul, Daunaka and Jobe also making up the area.

Kusada LGA is one of the local government area in Katsina State. It has an administrative headquarter in the town of Kusada, and other towns in the area include: Kofa, Dudunni, Yashe, Kusada, Bauranya, Aganta, Baurawa, Dangamau, Kai-Kai, Magama-Gidan Mutun Daya, Mairana, Mawashi and Tufani.

Zango LGA is in list as one of the thirty-four local government areas of Katsina state. With an administrative headquarter in the town of Zango, other notable urban areas include: Yardaje, Sara, Dargage, Garni, Gwamba, Kanda, Kawarin Kudi, Ragogo-Cidari and Molawamai Madaka.

Katsina state slogan is the ‘State of Harmony’, and it is one of the most populous state in Nigeria. This is due to the numbers of people and residents which make up the State. The state has a number of notable personalities which spearhead the state’s view. They are few to mention: President Muhammadu Buhari, Aminu Bello, and the late Nigerian President, Umaru Musa Yaradua.

Moreover, there are many urban areas in Katsina. This article have listed all towns and the local government areas that they are situated within Kastina state.