Typically, schools and departments in Nigerian universities normally require that students undertake a research project during their last year in the university. However, you would be required to write a project before being able to start the clearing. It’s easier than most persons realize to write a project proposal. 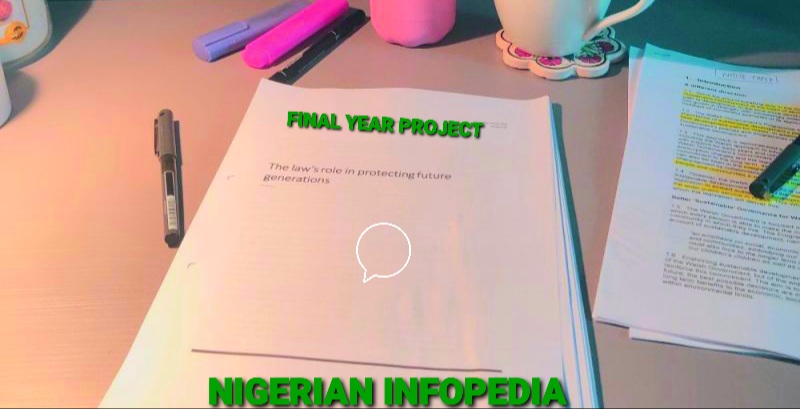 Unfortunately, a lot of students struggle with project writing, adding stress to an already difficult task. Choosing a subject for your final project is usually the most challenging aspect. The other tasks become simpler when you’ve completed this. In this article, the secret to writing a great project will be discussed.

HOW TO WRITE FINAL YEAR PROJECT IN NIGERIA

Detailed information on each of the five chapters should be included in a final year project that is fully researched. The procedures for writing a final-year project in Nigerian universities easily are listed below.

PRELIMINARY PAGES OF THE PROJECT

Here is the first part of your research project. The title of your project, that should not be longer than 23 words, Declaration, Certification, Acknowledgement, Table of Contents, List of Tables, List of Figures (if applicable), and Abstract are all included in the first few pages of a final-year project. Even though the Abstract page is one of the introductory pages, it is typically written only after whole project is finished since it needs to provide a concise explanation of the studies that have been done, the methodology used in the study, as well as the outcomes of the study and any recommendations.

ALSO READ:  Traditional Marriage Rites & Process In Igbo Land: How It Is Done

CHAPTER ONE: BACKGROUND OF THE STUDY

Each final-year project begins with Chapter 1. In essence, this chapter serves as an introduction to the research. These are only a few of the parts that make up this chapter:

ALSO READ:  List of All States in Nigeria Controlled by PDP Currently (2023)

Theoretical Review is concerned with one or even more existing theories from the recent history that offer justifications for the in concern research investigation. On the other perspective, an empirical review entails a critical analysis of the academic or literary works that have already been published on the subject of the study. In-text citations to the cited sources must be used by the researcher. In order to support his or her research study, the researcher should point out any gaps in the body of literature that have been observed in the writings of authors and other researchers. Academic writing or articles from recognized journals has to be the form of literature acceptable for evaluation in Chapter 2.

The methods and techniques used throughout the study are covered in this chapter. Typically, Chapter Three is broken into the following sections:

The researcher presents the study’s results in Chapter Four in a comprehensive way, which aids in the justification of any results. In this section, the research questions from Chapter 1 are addressed, and the hypotheses are pushed to the limit to see if the accurate predictions were correct or incorrect.

The key findings from the study’s data analysis should be enumerated and explained in detail. An introduction such, “Based on the examination of data the following discoveries emerged:” should come before presenting the results.

The researcher can now describe the results, make inferences, and provide answers to the difficulties that motivated the study. The researcher is obliged to discuss the project’s practical consequences for their field in this chapter.

There should be a section called “Conclusion” in which the researcher encapsulates the main points of their research. Additionally, the researcher must make suggestions based on the project’s discoveries.

Academic research projects at higher institutions in Nigeria are advised to follow the APA style of reference. Additionally, all charts, graphs, figures, and references must be mentioned. Plagiarism must be prevented at all costs to avoid your project supervisor canceling your paper.

We wish you a successful project defense and graduation.