This post provides information on how to become a pilot in Nigeria. It also provides the requirements and how much it would cost to enrol for flight training program and how much a pilot earns in Nigeria. While growing up, we have four (4) classes of science students. Those that want to be Doctors, those interested in Engineering, those that wanted to fly airplane and others. Professionals that controls the flight of an aircraft by operating its directional flight controls are known as Pilots. In simple terms, Pilots are the professionals that fly air-crafts. 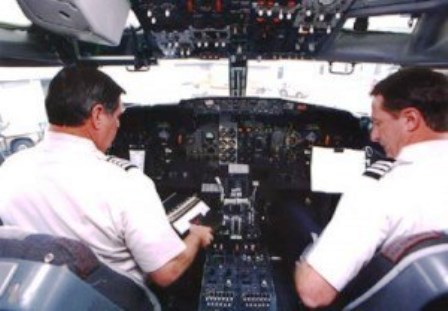 Due to the required technical skill and health condition required to fly a plane, for one to man an aircraft as its pilot, one need to undergo a form of training after which if considered fit, is given a certificate which gives him/her the right to fly an aircraft. While being a pilot requires smartness and intelligence, one thing also required is money except of course if one is going in as military personnel or on scholarship.

Do you want to become a pilot in Nigeria? This article will show you the process and requirements of becoming a pilot. In Nigeria, you can either become a commercial pilot working for airline companies or a pilot in the Nigerian Airforce (Military Pilot). Our focus on this article is on the commercial aspect. However, we will touch on the aspect of becoming a military pilot a bit.

To become a military pilot in Nigeria, just know that you must be in the Nigerian Airforce. To do this, you must go through the Nigerian Defence Academy (NDA). However, it’s not easy to get admitted. But if you eventually get into it, it is one of the cheapest.

How To Become A Commercial Pilot in Nigeria

To become a pilot in Nigeria, you need to attend a flying school where you are taught what it takes to be a pilot after which you are certified. In Nigeria, we have more than 10 aviation schools.

However, the cost in enrolling into them is very much expensive unless you are rich. Out of these schools, only one stands out in term of cost – the Nigerian College of Aviation Technology Zaria (NCAT).

The Nigerian College of Aviation Technology Zaria was set up by the Act No 31 of 1964 (as amended). It was formally known as Nigerian Civil Aviation Training Center (NCATC). It was established to conduct the following:

To become a pilot, you need to enroll in the flying school at NCAT Zaria. In terms of cost, due to government effort to subsidize the cost, it costs N7.5m to train a commercial pilot on this school. For some lucky ones, they go in through scholarship from their states government or other scholarship. If you are not in such situation, you have two option left.

ALSO READ:  How To Apply For Germany Masters' Program in Nigeria (2022)

To get accepted for training as a pilot student in the school, the following requirements must be met:

It takes about two years to complete the standard pilot course. After the completion of this course in the flying school, a pilot is issued a Commercial Pilot License together with instrument and Multi-Engine Rating.

Getting this is not easy. In fact, aside money, you need to be good technically and academically to be a pilot. You go through series of test both written and practical before you get certified.

Before graduating, a pilot is issued a Commercial Pilot License. All these licenses are issued by the Nigerian Civil Aviation Authority (NCAA).

These however is after a trainer must have passed all the necessary test which includes both written and practical test.

Flight Hours Required To Be A Pilot

However, to get a job in an airline company, you need 4000 hours. This is a number that can be acquired in flight school or by hiring a flight instructor from a FAA approved airport to supervise you.

How Much Fee To Pay To Train As A Nigerian Pilot

Depending on the flight academy you attend, to enrol for the Nigerian Pilot program training course, you would have to pay over $60,000 for tuition fee. This fee covers for beginners, those with zero experience to fly an airline. For commercial flight courses, it would cost $30,000 as tuition for the instrument course and certification.

How Much Pilots Earn As Salary In Nigeria

Pilots in Nigeria and other countries earn huge amounts as salary. No wonder that the career of a pilot who is well trained seem successful and is one of the highest paid jobs in the world.  If you want to  train to become a professional pilot in Nigeria, carry out your research to know how much Nigerian airlines pay their pilots.

The starting salary for an entry level pilot in Nigeria ranges from ₦200,000 to ₦300,0000 monthly while the experienced commercial pilots earn over ₦500,000 as salaries depending on the airline. Captains earn from ₦800,000 to ₦1.5 million as wages. They are the highest paid pilots in Nigeria, due to the number of flight hours and ratings logged. Most airlines pay in U.S. dollars (USD), so it depends on which airline employed you.