Nigeria has a huge spectrum of environmental conditions as a result of its vast size and diverse geographic features. This causes the country’s climate to vary depending on where you are, with the northern sections having a hot continental climate. However, the dry season’s temperatures differ from one Nigerian state to the next. But in the bulk of these places, this time of year always marks the hottest months. Nigeria’s north-west and north-eastern regions are where the majority of the country’s warmest states are located throughout the year. 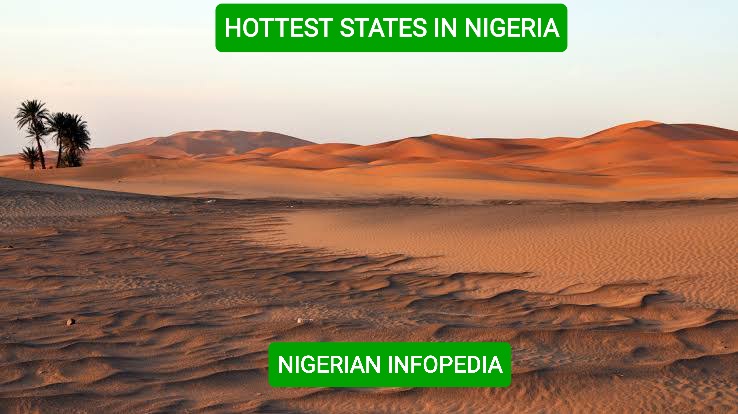 The hottest states in Nigeria are listed below, according to reliable sources. It’s also crucial to keep in mind that these states’ and areas’ temperatures might fluctuate, particularly with regard to the seasons and weather.

The average daily maximum temperature of Yobe, one of Nigeria’s hottest regions, is 37 degrees Celsius. It is warm or hot all year long. Yobe is currently the State with the highest average daily temperature in the nation, at about 37°C. Yobe State is located in northeastern Nigeria, a region that is perpetually warm or hot. Some people might be surprised to learn that Yobe is the hottest state in Nigeria, but the statistics do not lie. This should clear up any ambiguity regarding the hottest state in Nigeria at the moment.

ALSO READ:  How to Register a Trademark in Nigeria: Procedures & Requirements (2023)

Borno state is indeed one of the hottest and driest areas in Nigeria with a daily average high temperature of 36.8 degrees centigrade. The average annual temperature is 36.9 degrees, which is fairly warm, although there aren’t many months that are truly tropical and humid. Year-round, it is warm or hot.

Borno is the second warmest state in the country, with a per day maximum temperature of 36.8°C. Borno State, which lies in the country’s northeast, experiences hot and muggy weather for a few months of the year. Since this region of Nigeria sees less rain than other areas of the nation, October to May is the best time to visit.

The daily average temperature in Sokoto state is 36.8 °C. This is strikingly similar to that in Borno State. The State is situated in Nigeria’s North-Western region. It is currently the third warmest State in the nation. Like Borno State and Yobe State, Sokoto is one of the northern states of Nigeria. The region occasionally gets little to no rain and is hot all year long.

The daily average temperature in Kebbi State is 36.2 degrees Celsius. The fourth hottest state in Nigeria right now is this one. Kebbi is located in the Northern region of the nation immediately following Sokoto State. The state experiences little annual rainfall and high heat. They become one of the most popular in the nation as a result.

Jigawa State is now Nigeria’s fifth warmest state. The area experiences 35.8°C on a daily average. Jigawa is just another northern state, and considering how heated the majority of the northern states are, the reality that it reached this listing is seldom surprising. Jigawa experiences high temperatures all year round, much like the entirety of Nigeria’s northern states.

ALSO READ:  How To Legally Notarize A Document in Nigeria (2023)

The maximum temperature in Katsina state is 35.4 degrees Celsius on average. Among Nigeria’s warmest states, the state is sixth. It can get exceedingly hot in Katsina State during the dry season. The state is found in the North-Western part of the nation. Heat and high temperatures are common in this area.

Nigeria’s seventh hottest State at the moment is Kaduna State. There, the average everyday temperature is 33.5 degrees centigrade. Kaduna gets constant heat and minimal rain between May and October. This state is among the most significant regions in the nation’s north.

The following state on our list of the hottest states is Niger. In the state, the warmest temperature on average hovers around 33.5 degrees Celsius. They are now Nigeria’s eighth-hottest State as a result. This place has a similar climate to Kaduna. Niger State, the geographic center of Nupeland, is the biggest state in Nigeria. The State has year-round heat, much like any other northern state in the nation, although it does rain on rarely.

Kano State is the eighth hottest State in Nigeria, with an average daily temperature of 33.3°C. Despite certain areas being in the middle north, the state is mostly in the northern core. Contrary to popular misconception, it does not have the highest national average temperature. The climate in Kano is hot all year long. Nonetheless, compared to the other States we’ve highlighted above, it is more acceptable during the dry season.

Unexpectedly, Taraba State completes this ranking of the warmest states in Nigeria. It is the tenth hottest State in all of Nigeria. The daily average temperature in Taraba state is 33 degrees Celsius. Nevertheless, Taraba is undoubtedly one of Nigeria’s coolest States thanks to the Mambilla Plateau. In contrast, other regions of the State have hot temperatures all year long.

The 10 hottest States in Nigeria were the subject of this article. The information presented here is supported by research and comes from visits to these popular locations in Nigeria. Also check the coldest states in Nigeria.

Nigeria’s northern areas are where you’ll find the majority of the states and regions with the highest temperatures. These are primarily found in sahel regions and localities. Therefore, it is simpler to foresee that several of Nigeria’s hotter locales and districts with very high temperatures can be situated there. Even during Nigeria’s rainy seasons, these locations hardly ever get a lot of rain fall.

Many people will be shocked to learn that the majority of the southern states, if not all of them, do not rank among Nigeria’s ten states with the warmest temperatures. The fact that they are only marginally outside the top 10 does not mean they are not in any way hot. The heat felt in the far North does not compare to that of Abuja or Lagos, two of Nigeria’s main cities. They preserve their respective temperatures, which are those that are prevalent throughout much of the country.