Most people want to know the highest paid military in Nigeria. Although, the armed forces is a special unit in the country which comprises of the Nigerian army, air force and Navy, the question has always been whose pays highest among them? 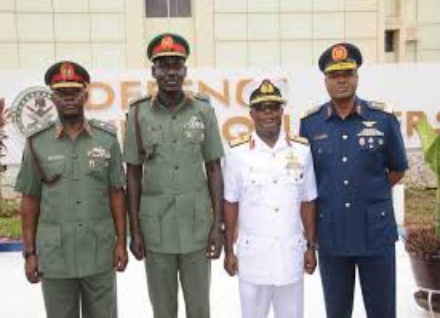 We have dully written on the Nigerian army salary structure, Nigerian Air force salary scale, How much does a senior Nigerian naval officer earns monthly and even the Nigerian Police and their various ranks.

You should be aware that the highest paid force among the military in Nigeria is the air force followed by the navy while the least paid is the army.

So if you want to go for a military job in the airforce, you should apply when they place their recruitment on their website. While the salary of an officer in the air force might seem higher than the rest, you would enjoy a stable career in the navy than any of the armed forces in the country.

FACTS ON THE HIGHEST PAID FORCE IN NIGERIA

The Nigerian Airforce was founded in 1961 shortly after the country participated in peace keeping missions in Congo and Tanzania. The need to airlift troops in the course of these peacekeeping operations signaled the importance of the country having a national air-force.

Subsequently between 1962 and 1964, the Nigerian Parliament began the process of institutionalizing the Nigerian Airforce. Eventually, the organization was established to ensure the integrity of the airspace by gaining and maintaining control of the air while retaining a credible capacity to fulfill other airpower tasks expected of the national defense and security outfit.

RANKS IN THE NIGERIAN AIR FORCE

In every military job, there is order, discipline and hierarchy. The NAF’s rank structure for its various officers both senior and junior are highlighted below:

In descending order of seniority the NAF officer ranks are:

In descending order of seniority the NAF airman/woman ranks are:

See the monthly salary structure of the commissioned and non-commissioned officers of the Nigerian Airforce Salary below:

Although this information of the highest paid force in the country is available for all, most people still prefer the navy job than than of the army or even the air force. What ever military job you choose, the pay is high especially for the senior officers.

There are three military forces in Nigeria and we shall discuss about them, listing their various ranks and salary structures to ascertain which of these military organization is the highest paid force in Nigeria today?

The Nigerian Army is seen as the largest military branch among the armed forces. They are mostly land forces, protecting the sovereignty, boundaries and territory of Nigeria against external forces that might try to invade the land.

The Nigerian Navy (NN) is the branch of the Nigerian Armed Forces operating on sea. Their primary duty is to protect the Nigerian sea borders against invaders.

The Naval command structure today operates from Naval Headquarters in Abuja with three operational commands in Lagos, Calabar, and Bayelsa respectively. NAVTRAC which is the training command headquarters is located in Lagos state at Marine beach.

With various ships, fleets and military grade weapons at its disposal, the Nigerian Navy has been ranked as one of the best and strongest navies in Africa having its training facilities and five operational bases in Lagos and Port Harcourt.

Below is a table showing the Nigerian Navy ranks and their yearly salary.

There are twelve ranks for senior officers but the following ranks below, we couldn’t find figures for their salary structure:

The Nigerian Air Force is the highest paid force in Nigeria among other armed forces in the country. Established in the year 1964, they have grown to be one of the most respected military organizations in Africa.

Every year, recruitment is done into the NAF via its short service program (DSSC and SSC) for University graduates and non graduates in a bid to increase man power and train officers to be combat ready in fighting skills and defense strategies.

We know that the Nigerian Air Force has fighter aircrafts, transport, helicopter, and high military grade guns and weapons in its arsenal.

See table showing information on salary structure of the Nigerian Air Force officers from lowest rank to the highest rank below.

Although the salaries mentioned looks big as to what they earn, this is apart from allowances accrued for special assignments, foreign missions, military operations and estacode.

It is pertinent to note that all Nigerian military forces are basically paid the same according to their equivalent ranks in the armed forces. Although, allowances may differ, it is safe to say that the Nigerian Air force are the most paid in the Nigeria military when it comes to salary and other bonuses.