This is the Biography of Olayinka Herbert Samuel Heelas Badmus Macaulay, simply known as Herbert Macaulay, the father of Nigerian Nationalism. He was an architect, engineer, journalist, musician, politician, surveyor and a Nigerian nationalist. 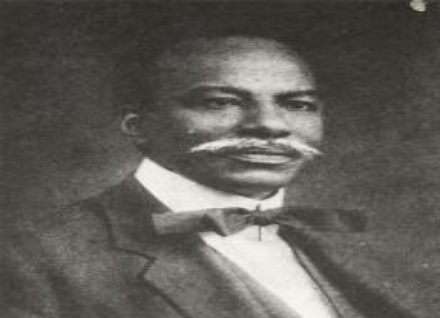 Herbert Macaulay was born on May 14, 1864 in Lagos, Nigeria. As founding father of Nigerian nationalism, he helped to lay the foundation of modern Nigeria and contributed to the shaping of popular perceptions of a modern nation and its obligations to the public. In addition, he maintained an abiding interest in the history and concerns of black people throughout the world.

Often he published news relating to the wider black world as well as the activities and views of Nigerian students abroad, especially those who went to the United States. Many Pan-African and other black organizations knew about his activities and sought his attention. His voluminous papers housed at the University of Ibadan include correspondence with the leaders of a variety of international black organizations as well as a sizeable collection of their publications.

He belonged to a distinguished missionary family with roots in the abolition movement and Sierra Leone colony. As earlier mentioned, he was born on May 14, 1864 in Lagos, he was the seventh child of Thomas Babington Macaulay,an Anglican Priest and Abigail Crowther Macaulay, both children of Liberated Africans who had been resettled in Sierra Leone. Along with thousands of other Liberated Africans in the mid-nineteenth century, Thomas Babington Macaulay returned to the homeland of his father as a missionary and educator of the Church Missionary Society (CMS), which then actively pursued the policy of training and hiring Africans, often Liberated Africans like himself, to establish missions along the West African coast.

He founded the CMS Grammar School in 1859, one of Nigeria`s most influential secondary schools. This group of Sierra Leonean returnees, known in Nigeria as “Saros”, pioneered in the establishment of Christian missions, modern industrial development, and the initiation of modern forms of constitutional development. They acted on syncretic principles, uniting selected traditional African institutions, customs and values with selected western institutions, customs and values.

Herbert Macaulay`s mother came from an even more illustrious Saro family. She was the second daughter of Bishop Samuel Ajayi Crowther, the first African Bishop who achieved worldwide fame in the nineteenth century as a pioneer in the Yoruba and Niger mission fields.

From childhood, young Herbert Macaulay learned the importance of a sound education, patriotism, and, of course, Christian values. However, his grandparents and parents also believed in the importance of indigenous Yoruba cultural values and of working within the larger culture around them. Like many later Pan-Africanists, they advocated the intelligent selection of progressive values and institutions from westernized Christianity and African society. Coming from such a family, he must have experienced a lot of pressure to enter the clergy, but he rejected this career in favour of a more worldly career. After completing his education at his father’s school, he entered civil service in May 1881 as a clerical assistant.

On May 1890, the government sent him abroad for further training under G. D. Bellamy of Plymouth. Three years later, he qualified as a civil engineer, the first Nigerian in this profession. On his return to Lagos, the government made him a surveyor of Crown lands in Lagos; however, he soon became dissatisfied with the conditions of his employment. Like many of his African colleagues, he hated the two-tier system then existing in government service, whereby British civil servants enjoyed better conditions and much higher salaries than Africans. Thus, in 1898, Macaulay decided to go into private practice as a licensed surveyor and architect.

The year Macaulay left civil service, he got romantically entangled with Caroline Pratt, who happened to be the daughter of an African Police Superintendent. They later got married but the union came to an end in May 1899 following Caroline’s sudden death. They had no children from the marriage. Even after her death, he maintained good relations with the Pratt family and saw to their welfare.

A devastated Herbert later married Maria Pase but some records indicated that he also kept a string of mistresses who bore him a battalion of children. Caring for the kids sapped his pockets but he had no option.

Herbert was the fifth child (out of seven) of his parents and his siblings included Owen Emeric Macaulay (died in May 1909, was Abigail’s eldest son), Thomas Fowell Buxton Macaulay (second child, died in May 1928) while the third sibling was Hugh Stowell Macaulay.

One of his sons, Ogedengbe Macaulay also took after him with his own militant brand of politics. Ogedengbe was a Zikist and at a time in 1948, with the NCNC becoming weaker, he and some other Zikists decided to take some pro-active steps. On an occasion, he said ‘If we tell the Governor to come down, he will not; we must drag him down and take over.’

His practice, however, was not very successful. Constantly in financial distress, he took advantage of his position as executor of the estate of a family dependent from which he misappropriated funds. Unfortunately, this act became known to the authorities, and he was tried and sentenced to two years imprisonment. While many sympathized with him because of the extenuating circumstances of his large extended family, this event meant that he could never become a candidate for public office.

Barred from elective public office, Macaulay made his mark in politics through journalism, political organizations, and various advisory capacities. Between 1910 and 1927, he was a frequent contributor to the Nigerian Chronicle. In 1927, Macaulay joined forces with his friend Dr. John Akilade Caulcrick, a physician and politician, to buy the Lagos Daily News, the first daily newspaper in BWA, founded in 1925. Macaulay decided on the political tone of the paper. This provided his platform for his battles against the government and his African political opponents.

His editorials and feature articles were often critical of government policy, especially relating to the liquor trade; the water-rate scheme; taxation in any form; racial segregation; attempts to deny indigenous customary land ownership; and a free press. He also reported on important developments of people of African descent throughout the world. His editorials and articles often skirted the edges of sedition, but on one occasion he crossed the line, giving the government the chance it needed to put him in prison again. This involved the publication of a rumor concerning a plot to assassinate the exiled Eleko (Oba or King) of Lagos.

Deep divisions on the issue of the deposed traditional leader already split the political leadership of Lagos, and the government feared that the publication of this rumor might lead to unrest in the streets and intensified hostility among local politicians and elders. Charged with the publication of false rumors, Macaulay was sentenced to six months imprisonment. After his release from prison, Macaulay took a somewhat more cautious line, but his writing remained highly critical. He continued to publish his newspaper until 1938.

Macaulay`s popularity as a political leader was due to his success as an advisor in two important court cases and the founding of the Nigerian National Democratic Party, the first well-organized political party in Nigeria. Both court cases were fought through the court system in Nigeria all the way to the Privy Council, the highest court of appeal in the British empire, which in both instances, found in favour of the Nigerian appellant.

The first case involved indigenous land rights and the nature of government compensation. Since the 1890s, West African indigenous lawyers and politicians had successfully warded off attempts by the colonial government to declare huge tracts of unused land as Crown land. They argued that all land was communally owned, even if unoccupied or uncultivated.

They argued that with the alienation of this land, the family would forever lose a rather substantial amount in future rents. Macaulay supported Chief Oluwa and his family, acting as an adviser throughout the lengthy litigation that went on until 1921. He went as interpreter and private secretary to London with the chief appellant, Chief Oluwa. On 14 May 1921, the Privy Council ruled in favour of Chief Oluwa: that communal land-ownership was legally recognized and that due compensation should be paid. This victory greatly enhanced Macaulay’s reputation at home and abroad, but it also hardened political lines and opposition in Lagos.

The second case concerned the role of the Eleko of Lagos, the traditional ruler. At issue were indigenous customary laws and customs that many believed the colonial government had disregarded. After a lengthy ten-year campaign, the Nigerian appellants succeeded in getting their appeal heard by the Privy Council. Again, the Council found in favour of the appellants. Not only did the Lagosian public applaud Macaulay’s success, but British anti-imperialist supporters praised him.

For fear that the government might take action against him, Macaulay refused to hold any party office until the 1930s. But in Lagos, there was no doubt that he was the driving force and real power behind the scenes. He maintained close ties with the first executive councils and was almost always present at NNDP public meetings. Further, he had extensive links with the masses of Lagosians through their traditional popular associations, particularly the market women’s unions and many vocational unions. He encouraged market women and elite women to take part in party activities, including speaking at its meetings.

In 1938, when the NNDP experienced its first defeat at the hands of the new Nigerian Youth Movement (NYM), Macaulay began to reassess his political strategy, opting for a united front to end colonialism. Initially, such alliances did not work out very well. In May 1944, however, he saw that the leadership and strategy of the National Council of Nigeria and the Cameroons (NCNC) offered brilliant prospects in the struggle for self-government.

Although many of his colleagues in the NNDP executive disagreed with him, he carried the day when he threatened to resign if they did not agree to enter into its coalition of interest groups (political parties, trade unions, literary societies, professional associations, social clubs and ethnic unions. Nnamdi Azikiwe, the dynamic leader of the NCNC, capitalized on Macaulay’s decision to join the party. At this time, Macaulay was 80 years old, but still appeared physically strong and mentally alert, but his insistence in undertaking a strenuous campaign against the constitutional proposals of 1945 proposed by Governor Richards taxed his strength.

While on a national tour, he suffered an acute attack of rheumatism and was forced to return to Lagos, where he died on 7 May 1946.

Huge crowds, estimated variously as between 100,000 and 200,000 turned out in the streets to mourn and all the markets closed for two full days. As is customary among the Yoruba, when a distinguished leader dies at an advanced age, his funeral became the occasion for a prolonged celebration of a life well lived and public service well acclaimed.