Gombe State is one of the thirty-six states in Nigeria, and it has eleven local government areas. In this article, we’ll look at these LGAs and the towns that are situated in it respectively. 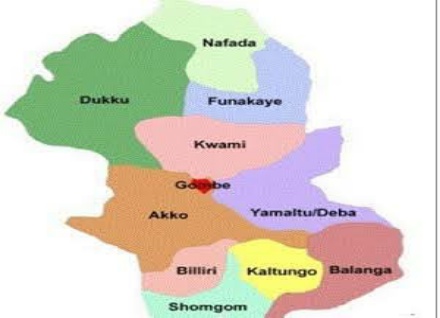 Located in the centre of the north east of the country, Gombe state has a land area of 20,265 sqkm and it shares common boundary with Borno, Yobe, Adamawa, Taraba, and Bauchi states. Gombe State came to existence on 1st May, 1996 when it was carved out from defunct Bauchi State by the then former Head of State, Late General Sani Abacha GCFR. This move to have Gombe as a seperate state was a fulfilment of the aspiration of the people who for long, had passionately craved for a state of their own out of the defunct Bauchi state.

The state has a capital in the developed town of Gombe with an estimated population of 2,857,042 people. Fulanis are the major occupants of Gombe state, but they are other ethnic compositions which include Tangale, Waja, Bolawa, Tera, Jukun, Jara, Pero, Tula, Cham, Lunguda, Dadiya, Kamo, Awak, Kanuri and Hausas. These tribes speak their ethnic dialects with the official language, English being the general language. However, Hausa language remain the commercial language amongst the people of the state, due the vast population of it speakers. Other dialects like Fulfulde, Tangale, Tera, Waja, and Kanuri are also commonly spoken.

ALSO READ:  How to Open USA Bank Account in Nigeria For Free (2022)

With respect to vegetation, Gombe state is generally a Guinea Savannah grassland with concentration of wood lands in some southern part of the state. Gombe State is situated in the savannah and has a considerate temperature. The climate in this region is generally warm, with temperatures not exceeding 30oc.

List of Local Government Areas and Towns in Gombe State

Since Gombe State was created out of Bauchi state on 1st May 1996 by the Late General Sani Abacha’s Administration, many local goverment areas were also setup to encompass all regions of the state. Gombe state has eleven local government areas namely, Akko, Balanga, Billiri, Dukku, Funakaye, Gombe, Kaltungo, Kwami, Nafada, Shongom, and Yamaltu Deba. And the major towns in the state include: Gombe the capital city, Bajoga, Billiri, Kaltungo, Kumo, Dukku, Deba and many other towns that will feature below.

Here is a rundown of all local government areas in Gombe state and the towns that are in the respective areas:

Akko LGA is a Local Government Area in Gombe State, and it has an administrative headquarter located in the City of Kumo. Prominent towns in Akko LGA include the following: Gona, Kumo, Pindiga, Garin, Garba Jalingo, Jauro, Tukur, Kembu, Kumo, Panda, Lergo, and Mararraban-Tumu.

Balanga LGA is one of the eleven Local Government Area in Gombe state, and it has its administrative headquarters in Talasse town. There are other prominent towns in Balanga LGA, which include; Bambam, Bangu, Cham-mwona, Chum- Kindiyo, Daduya Hill, Dala- Waja, Degri Dong, Gasi, Gelengu, Kulani, Nyuwar, Refele.

Gombe LGA is the capital and the most developed Local Government Area in the state. Its headquarter is situated in the major city of Gombe, which the area got it name. As a developed urban area, there are many notable towns, districts and villages which includes: Gombe (rural), Arawa, Doma, Gabukku, Inna, Manawashi, Pantami, Arawa, Doma, Gabukku, Inna, Manawashi, Pantami, Ajiya, and Bajoga.

Kaltungo LGA counts as one of the eleven local government areas in Gombe State. It has an administrative headquarter in the town of Kaltungo. Other notable towns in Kaltungo LGA include the following: Awak, Bagaruwa, Bwara, Daura, Dodonruwa, Dundaye, Garin Bako, Garin Barau, B/kaltin, Okshenda etc.

Kwami LGA is a Local Government Area, and has a capital situated in the town of Mallam Sidi. There are many other towns in Kwami LGA, and they include; Kwami, Jore, Jabla, Banishuwa Bojude, Bomala, Bula, Bunu, Dawo, Diango, Gabuku, Gadam, Gamadadi, H. Dinawa, Habuja and others.

Nafada LGA of Gombe State has an headquarter in Nafada town, where the area got it name. There are many other notable urban areas in Nafada Local Government Area, which are few to mention include; Langa, Mada, Maru, Papa, Shole, Shonganawo, Suka, Tondi, Wokollu, Zindir, Zangoma Kyari, Kiyayo, Kuka, Lafiyawo and others.

Gombe state is nicknamed the ‘Jewel in the Savannah’ due to the availability of precious (Gem) stones and mineral resources. The state has a lot of renown personalities which are few to mention include; popular politician Danladi Mohammed; Helon Habila, an award winning novelist; Joshua M. Lidani, a politician; Samkon Gado, Nigerian-American otolaryngologist; Aliyu Modibbo Umar, a notable politician; and Mohammed Danjuma Goje, a former governor of the state. We hope we have been able to outline the local government areas in Gombe state and the towns situated in them.