This post is on the biography of Godwin Obaseki and net worth. He is a descendant of the famously illustrious Obaseki family in Edo State was born in Benin City, Nigeria. 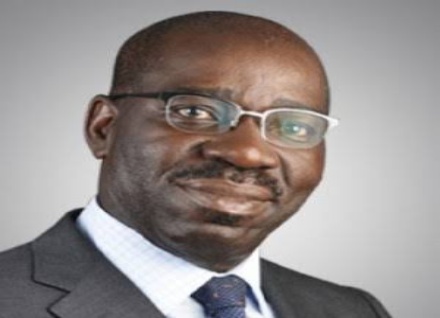 Godwin Obaseki, during his early years, attended St. Matthew’s Anglican Primary School, Benin City where he obtained his first leaving school certificate after which he proceeded to Eghosa Anglican Grammar School, also in Benin City, Nigeria, for his secondary education.

After secondary school, he later attended the prestigious University of Ibadan where he obtained a Bachelor of Arts degree in Classics.

On completing his education at the University of Ibadan, Godwin Obaseki moved to the United States to attend the University of Columbia and Pace University, New York, where he obtained his Master’s degree in Finance and International business.

Godwin Obaseki is a fellow of the Chartered Institute of Stock Brokers of Nigeria and an alumnus of the Lagos Business School Chief Executive Programme. He was also nominated a Global Leader for Tomorrow (GLT) by the World Economic Forum in 2001.

Godwin Obaseki has an impressive career spanning over 30 years. His established track record in investment banking, asset management, securities trading and the public sector both locally and internationally stand him out among many.

In 1983, he joined Capital Trust Brokers Limited, Lagos, where he began as a stock broker. He excelled greatly and he subsequently went on to bigger and better things like working with International Merchant Bank, an affiliate of First Chicago Bank.

He also joined AVC funds Limited, Lagos in 1988 and he served as Project Manager. Asked Project Manager, he was team lead of the core team that set up two new generation banks which improved the banking system in Nigeria.

From 1993 to 1995, Godwin Obaseki worked as a Principal of Equatorial Finance Co. in New York. He also founded Afrinvest West Africa Limited, which was known at that time as Security Transactions and Trust Company Limited, SecTrust, and became the pioneer Managing Director.

He also served as executive board member of several other private companies.

He is the current Governor of Edo State, replacing Adams Oshiomole. He also won the just concluded governorship election in Edo, beating Pastor Ize Iyamu under the PDP for his second tenure as governor of the state.