The Nigerian Judiciary system is one of the best in West Africa. No nation can prosper in all ramifications without order. One of the things that our country boasts off, is the best personnel that handles the legal or justice sector of the country. It is the Chief Justice of the supreme court of Nigeria that is the most prized office in Nigerian judiciary helm. After the National Judicial Council of Nigeria makes its recommendations, the president would then appoint a chief justice. 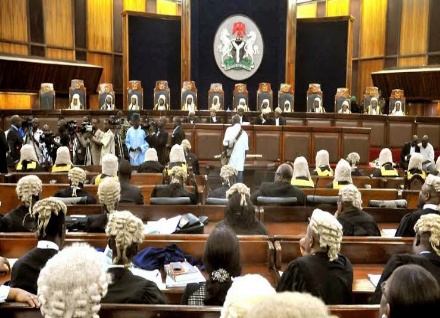 Since time immemorial, Nigeria as a nation has had a lot of well-qualified lawyer makers grace the seat of the Chief justice of Nigeria. Outside death and retirement at age 70, one cannot be removed from the office of the chief justice of the Nigerian Supreme Court. In this write-up, we would be taking a look at a comprehensive list of the Chief Justices of the Nigerian supreme court, from past till date.

Let us envisage another list of Nigeria chief justices before the nation was amalgamated into one nation under British rule.

During British rule, Nigeria was divided into Protectorates. This lasted from the year 1900 to 1914. So let us see the Chief justices of both the northern and southern protectorates, and the year that they served.

Chief justices of the supreme court of Northern protectorate

Who is the Current Chief Justice of The Supreme Court of Nigeria?

The current Chief Justice of Nigeria is Hon. Mr Justice I. T. Muhammad. His Lordship was born on the 31st of February 1953. He had his primary education at the Grace primary school from the year 1961 up until 1968. He went on to have his secondary education at the Government secondary school, Azure from 1969 to 1973. As for his secondary education, he attended college at the Abdullahi  Bayero University College in Kano(1975 to 1976). He went on to study law in ABU (Ahmadu Bello University, Zaria) from 1976 to 1980. From 1980 to 1981, he attended Nigerian law school. He also had his Masters degree in the same University from 1982 till the year 1984.

The current chief justice of Nigeria once served as the Magistrate Grade II in Bauchi State Judiciary from 1982 to 1984. He later rose to the level of senior magistrate Grade II in subsequent years. Around 1986 to 1989, his Lordship was appointed as the Provost of the College of Legal and Islamic studies in Bauchi state. That was around the year 1986 to 1989.  From the year 1990 to 1993, he was appointed as the Sharia Judge of the Sharia Court of Appeal, Bauchi State. He rose to be the Chief Justice of the Court of Appeal from the year 1993 to 2006.

On the 8th of February 2007, his lordship was appointed as the Chief Justice of the Supreme Court of Nigeria. He stills holds this honourable position till date.

Who is the First Female Chief justice of the Nigerian Supreme Court?

Well, it is no surprise to spot that women are no missing in action at the Judiciary front. Nigerian had a female in the number one judiciary office in Nigeria, and that was during Ex-President Goodluck’s Regime. Her name is Aloma Mariam Mukhar.

Mrs Aloma Mariam Mukhar was born on the 20th of February 1944.  She was called to the English Bar in the year 1966, and subsequently, Nigerian bar in the year 1967. Nigeria’s first chief jurist of the supreme court was sworn on the 16th of February 2012. She was sworn in as the 13th indigenous chief justice of the federal republic of Nigeria. She was sworn in by the then president, Goodluck Jonathan. Do you know that this wonderful female jurist has a lot of “firsts” to her name? well, let us shoot; she is the first female Jurist from northern Nigeria, she is the first female jury of the Kano state high court Judiciary, the first justice of the Nigerian court of appeal, and finally, the grand finale- the first female chief justice of the Nigerian supreme court.

In the course of her illustrious career, she received a lot of awards. Let us highlight them below.