Some top football teams in Europe rely on home grown talents which actually cost nothing to buy and these players make some of the most successful football players in the world because of the coaching and training they were exposed to at a very young age. 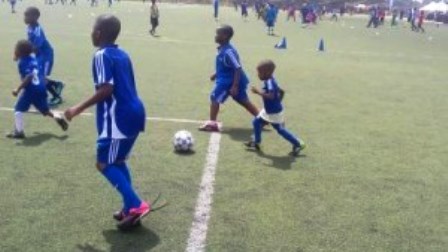 Although many successful football clubs have academies but some of the most successful clubs that have produced proven home grown stars include Ajax, Liverpool, Dortmund, Arsenal, West-ham and many more just to mention a few.

Basically, a football academy is a institution and a facility set up to develop young footballers. Most often, it is thought of as a training school to teach young players how to play football. These football academies are situated under football teams which the footballers will be trained into. This will help these new players to meet the club’s specific standard.

Moreover, football academies are special training schemes set up by clubs to help them develop young players for their team. Virtually, all football clubs have their own academies, either small or big. Some other League clubs run either Academies or Centres of Excellence, which are run along the same lines. Without much ado, let’s look into the best football academies that are available in Nigeria.

Africa and Nigeria at large lack good football academies and this post would list out the top 10 best football academies in Nigeria where you can get the best training and coaching and it is leveraged on the players produced and success of the academies in competitive tournaments. Although we are not near that of the European clubs but these top 10 academies will surely get you to those clubs in the long run.

The Pepsi Football Academy is practically the best football academy in Nigeria and it is owned by the popular beverage, Pepsi.  This well known football academy provide talented and skilled youngsters the opportunity to develop their career within the footballing industry.

Some prominent footballers that emerged from Pepsi Football Academy includes the likes of Mikel Obi and Elderson Echiejile just to mention a few. Pepsi also gives scholarships to students of its academy to study in the UK.

Originally based in Lagos at Agege Stadium, Pepsi academy now has 14 centers across the country and has over 3000 students. The fee for Pepsi Football Academy Registration Form for those aged five to fourteen is ₦6,000 only.

This is another top soccer academy owned by the Kwara state government and established in 2005. The Kwara State Football Academy is the initiative of Bukola Saraki. The academy which commenced operations with former Nigeria national team technical adviser, Clemence Westerhof and is now managed by a Swedish technical director, Paul Ashwonth.

Ashwonth has managed many professional teams in Europe including Dynamo Kiev and FC Peterborough. The academy has 7 other coaches, who are former Nigeria International footballers with coaching certificates.

The academy currently has over 150 students and accepts young talented footballers between the ages of 13 – 21 years.

Abuja Football College was established in November 2012 by Gabriel Newton who is also FIFA Licensed instructor, in partnership with Haruna Abba. This Nigerian football academy has what it takes to be among the best in the country.

AFC also got to the Semi finals of Croatia soccer tourney in November 2013, defeated Pro-clubs like FC Zagreb and Croatia’s under 21 national team.

AFC training center in an exclusive location at Wuse, Abuja Municipals Bwari, has residential suite that can accommodate 120 students. It also has a college with Wendy Cameron as the principal. The college run USA educational curriculum.

Midas Football Academy Nigeria was established in November 2006 to discover young soccer talents in Nigeria and the rest of Africa and make them better persons in the society, the academy is affiliated with the Nigeria Football Federation.

Owned by one of Nigeria’s greatest footballer Nwankwo Kanu who played with Ajax, Inter Milan, Arsenal, and Portsmouth and has a lot of medals to his name. Papilo Football Academy was founded in 2001.

PNKFA has succeeded in transferring over 10 players abroad. Notable names include Joel Obi of Inter Milan and Stanley Okoro of Battista, who is nicknamed ‘Little Messi.’

Kanu uses his connections to bring in Top international coaches like Bryan Robson, Gary Smith… to train the students on short courses. The academy has over 200 players in Nwankwo Kanu’s private estate at Egbu Owerri road.

Kanu is also reportedly said to be building one of the biggest football academies in Africa and the academy is open to Under 15, under 17, under 19 students.

Barcelona Football Academy in Nigeria is another well known school that is anxious to show you how to use your skills to play the best football game. The requirement of this institution is that you must be at any rate 5 years of age or as long as 18 years of age.

Situated in the city of Lagos, those young children who in Lagos who are interested on a football career, should study here. This is on the off chance that they have football aptitudes or abilities.

The London club also have an academy to groom young talents in Nigeria. As a top football academy in Nigeria, they have the best trainers to aid you in horning your soccer skills. If you certainly have plans to play football at an elevated level, then you should dream about joining the popular Chelsea football academy.

Notwithstanding, it is situated in London (the UK). In 2012, there was some good news about Chelsea having plans to dispatch its own football academy in Nigeria.

If you want to go for this football academy, it would seem that you actually need to make a trip to London. An then, you will be able to join the Chelsea football academy for young ladies and men who wants the best football training.

Alternatively called AFC, this football academy was established about eight years back, in 2012. Gabriele Volpi remains behind the possibility of such a school for capable young men from everywhere the nation. Normally, Abuja football college is situated in the city, however it additionally has other centres in Lagos, Onne, and Warri.

Nonetheless, in the event that you are gifted in football, you can enroll into this place and build up your football abilities and entirely your career. Also, being an understudy of this Football College can allow you to play for the school group competition and partake in various national competitions.

You can pick this Nigerian football academy in the event that you have plans to acquainted with the professional football game. Edusko sports academy was set up by a notable footballer Chief Segun Odegbami in 2007. It is at present a standout amongst other soccer and sports institutes. It invites skilled youth from various all parts of the country.

This football academy centers around various games, including football. Notwithstanding this major, the students can decide to get some knowledge of tennis, b-ball or take different courses.

This is yet another reliable football academy to groom young talents in the country. Little children who have turned three years of age and love football games can enter the Little Tigers FC and begin their career training.

This club additionally invites young people who are as long as 15 years of age. On the off chance that you are interested in the institution, you should visit their website for more information on how to enroll in.

The school was established for youngsters who love to play with the ball, so that they can build up their abilities here.

HOW MUCH FEE DO FOOTBALL ACADEMIES CHARGE TO REGISTER

Football has been Nigeria’s major sport over the years till date. There isn’t a place or state you go to that you wouldn’t see a round leather ball being played on the streets. With this passion, there are academies that groom talented kids, turning them into football stars who in turn ply their careers at European football clubs.

Are you searching for the right academy to train your child into becoming a football star, below is a list of all football academies in Nigeria and their addresses to locate them:

Abarowei Football Academy is one of the best in terms of grooming young kids to horn their soccer skills. You can contact them at their address at No. 5 Ajatta Street, Idimu, Alimosho in Lagos State.

This is another academy located in Lagos State and has trained some of the popular names of players you hear in Nigerian football teams. They can also develop your children soccer skills via their leagues and tournaments organized by the management with other academies. They re located at No. 13 King George V Road, Onikan, Lagos.

At Buruj Sports Academy, the trainers put trainees to regular and advanced football sessions which in turn develop these young footballers into professional stars. The academy address is located at No. 8 Adeniran Oshodi Street, Majidun – Ogolonto, Ikorodu.

This school provides soccer courses for little children and have football camps for various age brackets from ages 7 and 17. The City of David United FC Soccer School address is at 15B Muri Okunola Street, Victoria Island, Lagos State.

De Deacon is a female based soccer academy that harnesses the potentials of female talented footballers. You can reach them at their address which is located at 8, Matthew Emmanuel Street, Odogunyan, Ikorodu, Lagos.

Other top football academies and their addresses include: