This post contains the biography of Femi Fani-Kayode popularly known as FFK, his education, political career, family, hobbies and net worth. 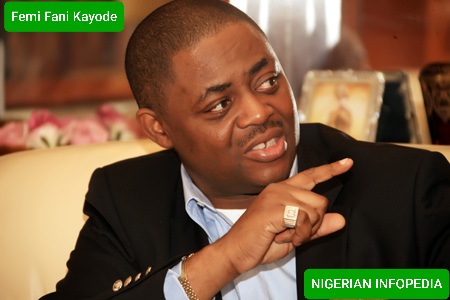 Femi Fani-Kayode was born in Lagos, Nigeria on 16th January 1960 to Chief Remilekun Adetokunbo Fani-Kayode and to Chief (Mrs) Adia Adunni Fani-Kayode. He was christened David Oluwafemi (meaning “the beloved of the Lord”) Adewunmi Fani-Kayode. He is a lawyer, a Nigerian politician, an evangelical christian, an essayist, a poet and he was the Special Assistant (Public Affairs) to President Olusegun Obasanjo from January 2003 until January 2006.

Femi Fani-Kayode started his primary school education at the age of 8 at Brighton College, Brighton in the U. K. after which he went to a prestigious boarding school called Holmewood House Preparatory School in Tunbridge Wells,Kent, South-East England. After distinguishing himself in prep school he gained entry into the famous Harrow School in Harrow on The Hill, United Kingdom and later on into Kelly College in Tavistock, U. K, where he completed the rest of his public school education.

In 1980 Femi Fani-Kayode proceeded to the prestigious School of Oriental and African Studies, where he graduated with an LL.B law degree in 1983. He gained entry into Cambridge University (Pembroke College) where his grandfather, his father and his older brother, Akinola (Downing College) had all previously read law. At Cambridge Femi Fani-Kayode matched his father’s score in his final exams by also getting a very high upper second in his post graduate LL.M degree in 1984. After finishing from Cambridge he went to the Nigerian law school and in 1985 was called to the Nigerian Bar.

In 1993, after a brief illness and under the tutelage of Archbishop Nicholas Duncan- Williams of Ghana, Femi Fani-Kayode found God and became a devout and practicing Pentecostal/Evangelical christian. This experience had a profound effect on him and completely transformed his life style and world view. He was miraculously healed and delivered from sickness and certain death by what he described as “God’s divine, merciful and all-powerful hand” and consequently he gave his life to Jesus Christ, stopped drinking, stopped smoking, stopped reveling and stopped going to parties.

He became a committed and conservative “born again” christian and often told people that he is “nothing but a living manifestation and evidence of God’s immeasurable grace and mercy”. He decided to go back to school to study theology at the Christian Action Faith Bible Seminary in Accra, Ghana. In 1995 Femi Fani-Kayode bagged a diploma in theology from that famous institution.

After leaving law school in 1985 Femi Fani-Kayode worked in the law firm of the legendary Chief Rotimi Williams in Lagos after which he moved to his father’s Law Firm “Fani- Kayode and Sowemimo”. There he worked under the direct tutelage of his father and his uncle, the late and highly respected Chief Sobo Sowemimo S.A.N (whose older brother, the late Justice George Sodeinde Sowemimo, was the Chief Justice of Nigeria from 1983 to 1985). Other notable personalities that were trained at this great law firm include Chief Robert Clarke S.A.N, Alhaji Femi Okunnu S.A.N, Seyi Sowemimo S.A.N Justice Moni Fafiade, Justice Niyi Ademola, Chief Kunle Alex-Duduyemi (the wealthy businessman from Ile-Ife, South-Western Nigeria who Chief Remilekun Fani-Kayode mentored and trained), the Oxford-trained and brilliant Gbolahun Alastishe, the Cambridge-trained Abba Kyari (who later later became the managing director of one of Nigeria’s largest banks), the Cambridge-trained Funke Aboyade, the Durham-trained Femi Lijadu and many other senior members of both the Nigerian Bar and bench.

ALSO READ:  Official Salaries of Nigerian Ministers Exposed: See How Much They Earn

After working there for three years Femi Fani-Kayode was promoted to the position of a senior partner in 1989.

Femi Fani-Kayode is happily married to Mrs. Regina Fani-Kayode (nee Hanson-Amonoo) who hails from a distinguished Ghanian family and who is a pastor and a rising figure in the intercessionary ministry of the Pentecostal/Evangelical church.

They are blessed with a beautiful daughter, Remi Fani-Kayode. Femi Fani- Kayode has another daughter. She is Folake (who is a graduate of Durham university) is a product of his first marriage to Saratu Attah, a distinguished Ghanaian politician and businesswoman and the daughter of Alhaji Adamu Atta the former Governor of Kwara state.

Femi Fani-Kayode has won and been honoured with many awards both before and during his service in government. These include the City People Magazine Minister of the Year Award in 2007; the certificate of Merit Award by the Southern Youth Foundation in 2006; the Preservation of Cultural Values of Nigerians Award by the Federal Ministry of Culture and Tourism in collaboration with Festive Friends in 2006 and many others.

While the net worth of Femi Fani-Kayode can’t be seen in any publication, we know that the former minister is a wealthy man worth millions of Naira, due to his assets and properties within the country.