Femi Adebayo Lateef is a popular Yoruba actor. He took after his Father, who is an accomplished, well to do actor, director and movie producer. 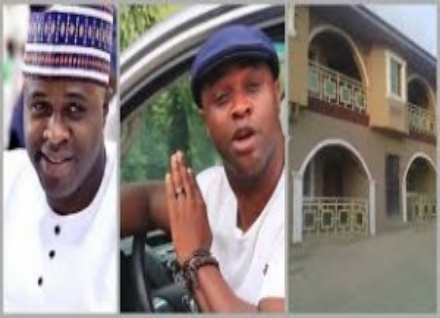 He is also a writer and a specialised lawyer, he is known for his notable role in movies/films like Atona produced in 2009, Ladies Gang in 2011, Omo pupa in 2008 and most importantly Jelili in 2011.

Femi Lateef Adebayo was conceived on the 31st of November 1972. He is the son of a powerful, intelligent Nollywood actor Salami Adebayo also known as Oga Bello.

He hails from Ilorin, Kwara state but he was born and breed in Lagos state, Nigeria into a large polygamous family and his father has many children, and according to him, must of Oga Bello’s children are graduates.

Adebayo maintains a good relationship with his father and holds great deal of respect for him.

He ended his marriage with his 1st wife in 2015, the woman who had his first 3 kids. He claimed he broke it off with her because she was not in agreement with his profession.

There was a rumour one time that he was romantically linked with actress Funke Akindele and then he shut down the rumour that they are just friends and she has nothing to do with his break-down in his home.

Femi Lateef Adebayo studied Law in the University of Ilorin. After this he proceeded in getting a Master’s degree in Theatre Arts.

Adebayo’s ambition for a very long time since when he was a kid was to be a lawyer. His father, Oga bello is a very supportive father especially when it comes to his children’s career. And he does not bother himself with any career they choose to study, since that is what they want, he gives them his 100% attention and support.

Femi Adebayo’s love for acting was built in him, when he saw his father on the TV for the very first time. Then when he grew up he subsequently sojourned into acting. His father noticed his interest in acting and decided to give him 100% support in every area, even after he finished with the Law degree.

Femi Adebayo’s father influenced him indirectly to be a better actor.

As at 1996, Femi Lateef Adebayo, won an award for Best Upcoming Actor of the year 1996. Ever since then, he has won several awards as the Best Yoruba Actor.

In 2015, he was priviledge to be awarded Best Movie Producer of the year (Yoruba) at the City People Entertainment. He then, attached his signature to a multi-millionaire naira endorsement deal with Trophy Beer as a Brand Ambassador.

He is the Managing Director, founder and Chief Executive of J-15 Media Network Nigeria. He is also the Special Adviser to the Governor of Kwara State on Arts, Tourism and Culture.

Femi Lateef Adebayo had his first movie role as Tade Ogidan in a film titled “Owoblow” which was produced in 1995. Since this success, Femi Adebayo has gone on to become a household name as far as Yoruba Movies are concerned.

He has starred in hundreds of Yoruba/English movies (home videos) and has also won the hearts of a lot of people in Nigeria and abroad, who are fans of Yoruba movies.

He has gone on to star in movies like:

He was also a host to other movies especially in 2006, when he produced a movie titled “Idanwo”. He has acted several Nollywood English movies like Survival of Jelili, Death Island, Diamonds in the sky, November 1st, Ladies Gang, and many more.

Also, he established a film school for those interested in acting named J-15 School of Performing Arts, located in Ibadan. The school has produced over 150 granduates since its inception. Some are even lecturers of Theatre Arts in various Universities in the country.

Femi Lateef Adebayo is one of the richest and influential Yoruba actors with an estimated net worth of $900,000.