The Federal Capital Territory (FCT) Abuja is the centre of Nigeria where all the administration and governance is done. It is one of the wealthiest urban areas in Africa, due to the presence of top personalities. Abuja is also ranked among the fastest growing cities globally, and however, leads the African chart. 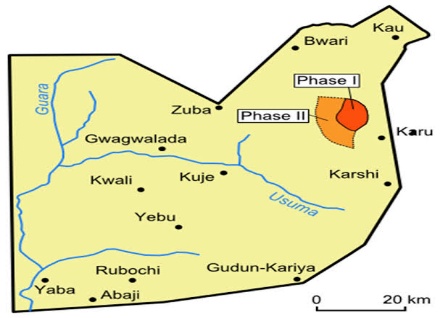 FCT-Abuja is nicknamed as the centre of unity. This is due to the conglomeration of numerous ethnic groups in the country living together to make up for the 2 million population of the area. Furthermore, we will look extensively at the Federal Capital Territory, Abuja and  highlight the local government areas and prominent towns in each of them.

The Federal Capital Territory (FCT), also known by the acronym FCT- Abuja, is a federal area in the central middle belt of Nigeria. Abuja is the capital city of the territory.  FCT was formed in 1976 after a move to have a centralized capital for the country. The territory was carved out from parts of the states of old Kwara, Niger, Kaduna and Plateau States with the bulk of area also removed out of the old Niger State.

The Federal Capital Territory, Abuja is located in the centre of the country, precisely in an area just north of the confluence of the Niger River and Benue River. The territory is shares common boundary with the states of Niger to the West and North, Kaduna to the northeast, Nasarawa to the east and south and Kogi to the southwest.

With FCT-Abuja being the capital of Nigeria, there has been the presence of numerous governmental institutions, foreign embassies. These have been complemented by the availability of many organization and business headquarters strategically located in the heart of the nation. There’s no doubt that all these have led to significant investment in the city. Consequently, it makes FCT-Abuja one of the most preferred option for visitors in the country.

Abuja currently rank 4th in the list of biggest metropolitan population in Nigeria. They are bettered of by Lagos, Kano and Ibadan cities. The people of FCT-Abuja are indigenously of the Hausa ethnic group, and other tribes making up the area. There are a good number of resident tribes like Yoruba, Igbo, Bini, Ijaw, Ibibio-Efik, and other ethnic groups still living there. Also, as Nigeria’s capital city, a lot of foreigners and International personalities are living in the territory.

ALSO READ:  Names & Types of Forests in Nigeria and Their Locations

The vast group of people living in FCT-Abuja has result to the presence of a cluster of distinguishing languages in the territory. The varying indigenous language of FCT-Abuja include Gupa-Abawa, Ganagana, Gade, Gbagyi, Nupe, Gwandar, Ashe, Gbagyi, Gbari, Igbra, Gwandara, Kami and Hausa. Nevertheless, English is the official language of the city, and other major Nigerian languages like Hausa, Yoruba, Igbo, Edo and Ibibio are also spoken due to availability of the tribe there.

FCT-Abuja is not one of the states in the country, but rather it is a federal territory. It is headed by a minister. The area houses the seat of power in Nigeria, and government federal agencies are all headquartered in the city area.

List of Local Government Areas and Towns in FCT-Abuja

FCT-Abuja is divided into different council areas which is also the local government areas. The Federal Capital Territory, Abuja is currently made up of six (6) area councils, which include:

Abaji is a local government area in the Federal Capital Territory, Abuja. The area has a land mass of 992 km² and a population of 98,000 which was recorded as at 2016. It is the land of the Egbira, Ganagana and Hausa people, which makes up as the major occupants of the area. Abaji is a bordering council area in the Federal Capital Territory, Abuja, as it shares boundary  Nassarawa, Niger and Kogi states.

Being a developed area, there are lots of urban areas in Abaji. They include notable towns like:

Abuja or Abuja Municipal is a council area in the Federal Capital Territory, Abuja. It has an administrative headquarter in the central part of Abuja city, being Nigeria’s capital.

The Abuja Municipal council area is located in the centre of the country within the Federal Capital Territory (FCT). Being in Nigeria’s capital, Abuja, the local government is responsible for the administration of the city.

Abuja Municipal is made up of different tribes which occupy the Nation’s capital city. However, the indigenous people of Abuja are the Gbagyi (Gwari), with their language formerly the major of the region language. Other notable ethnic groups in the area include Bassa, Gwandara, Gade, Dibo, Nupe, Koro, and the remaining resident tribes.

Being an urbanised area, there are unnumbered towns and districts in Abuja Municipal. They include the following;

Federal Capital Territory (FCT) of Nigeria . The indigenous occupants of the area are of the Gbagyi speaking people. Other residents groups like the Hausa, Yoruba, Igbo and other foreign groups also live in the Bwari area.

With Bwari city, being the administrative headquarter of the local government area, there are many other urban centres in it. The following is the list of notable towns in Bwari area council:

Gwagwalada is one of the area councils in the Federal Capital Territory, Abuja. It is a local government area in the federal territory. Gwagwalada has an administrative headquarter in the city of Gwagwalada, where the area got it name from. The council area has a land mass of 1,043 km 2 and a population of 157,770 (2006 census).

Gwagwalada local government area council is composed of ten wards, and the area is made up of towns and urban districts which include:

ALSO READ:  NIPOST Tracking Service: How To Track Your Parcel (2022)

Kuje is an area council in the FCT-Abuja. It has a Local Government Area headquarters in the central part of Kuje city, which is about 40 km southwest of Abuja. Kuje LGA has an area of 1,644 km² and a population of 97,367 at at the last national census in 2006.

There are some urban areas in Like LGA. Presently, Kuchiyako is the most developed area in local government area. Below is the rundown of some notable towns in Kuje:

Kwali is one of the six local government areas of the Federal Capital Territory, Abuja. It was created on May 1, 1996 by the then military administration of General Sani Abacha. Kwali local government area council is headquartered in the town of Kwali, which the area got it name from.

Kwali area council is made up of about 10 wards, and urban centres. Notable towns in the area include the following;

That’s it on the local government areas and towns in the Federal Capital Territory, Abuja. We hope you now know where to visit in Nigeria’s capital city. But before making a plan, here are some other things to know about the city area.

Aside the structures, Abuja is well connected with urban roads, and this is complemented with a light rail and air transportation network. FCT-Abuja is the home of various multinational companies, as such a lot of opportunities are available in the city area. Would you mind taking a visit there to see the eye-opening developments?