Home Facts Information Ethnic Groups in Nigeria And Their Foods

There are a large number of foods consumed in Nigeria. The sole reason for this is the multi-ethnicity and cultural diversity of our homeland.  From northern to southern Nigeria, there is a great variant in foods consumed.  With over 520 languages and 371 ethnic groups, the food culture of our country would make quite a tale in this article. 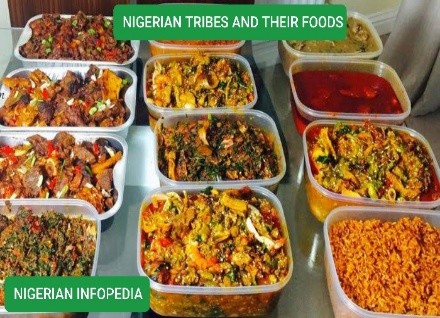 List of Ethnic Groups in Nigeria And Their Foods

Below are various tribes in Nigeria and their delicacies:

In Nigeria, Igbos are one of the three major tribes. They settled mostly in the eastern region of Nigeria. Some of the Igbo states include; Anambra, Ebonyi, Abia, Rivers, Delta, Imo and Benue.  Igbos are greatly admired throughout the nation as mentally independent and industrious people. They indulge in a lot in subsistence agriculture, and some of their main produce includes palm oil, cassava, yam, Manoic, Rice, Corn, vegetables, wild fruits and some classic herbs. Later on in this article, you would notice that the foods Igbos consume, revolves round about what they farm.  Without further ado, let’s delve in to see classic foods eaten by the Igbo ethnic group.

This can also be called Ji in the Igbo language. It is one of the most celebrated food in eastern Nigeria. Well, because of this delicacies peppery nature, it is not always recommended to use as breakfast. This ethnic taste bud igniter is rich in omega-3 fatty acids, vitamins B6 and B1, and most importantly carbohydrates and proteins.

I don’t want to bother you with the recipe for this ethnic diet. Yam and pepper is quite a meal though.

Are you looking for a food that best represents Igbo culture, then Fufu and Uha soup are right there for. Till this day, a lot of Igbos believe that Uha soup has a lot of root with Igbo ancestry. In any market around the south-east, you can find the ingredients for this food. The ingredients for this food include; Oha leaves, Cocoa Yam, Meat of choice, Dry Fish, Maggi, Uziza leaves, Ogiri, Stock Fish, Salt, Pepper.

I don’t know about you, but I find the Igbo bitter leaf soup to be quite amusing. Do you why? Well, it is not bitter at all! When well prepared, the bitter leaf when submitted to proper heating and washing stops tasting bitter. Another name for this food is “ofe onugbu”. Bitter leaf is presumed to have a lot of medicinal properties. Bitter leaf has a lot of antioxidant properties. That is, in fact, one of the reasons for is wide consumption.

Some of the ingredients for the soup include; meat, bitter leaf, cocoa-yam, salt, pepper, palm oil, stockfish, ogiri, crayfish.

The Yorubas are the second largest ethnic group in Nigeria. They can be found in the southwestern part of Nigeria.  This ethnic group consists of African traditionalists, Muslim, and Christians. The majority are Christians while the rest are a minority. Occupationally, they always indulge in subsistence agriculture. Some of the crops they grow include; Yam, bananas, cassavas, groundnuts, millet and various vegetables. Given that they leave in rainforest zones, they are also known for farming Cocoa. Cocoa is the main export of this ethnic group. Unlike their northern, they are not nomadic herdsmen.  You cannot separate a people’s culture from what they eat. So since I have highlighted their culture, let’s look in the foods consumed by the Yoruba ethnic group.

Gbegiri as a Yoruba food has a lot of history attached to it. It has been known for long as a meal with a thousand health benefits. Gbegiri is also known as black-eyed beans soup.  It can be prepared with ground beans, vegetables, and palm oil.

This food is well related to the Efik tribe in Nigeria. Just like other Yoruba delicacies, it has a lot of health benefits. Some of the things needed to be preparing it to include tatashi, spinach, smoked fish or meat stock. The food is rich in vitamins.

Ewudu is the most popular soup in Yoruba land. The food is so-called because of the Ewudu leaves that it is mostly prepared from. You can use Ewudu leaves, crayfish, and many cool spices.  It tastes good when served wit semo or Eba.

In Yoruba language, Ewa means beans, whilst Agoyin is food that belongs to the beninoise people. Here, the beans are cooked until it has a soft feel, then it is grounded. With additional ingredients like palm oil, crayfish and dried pepper, you are set fair for a round of taste bud jollying.

Akara also is known as bean cake, is an omnipresent food of the Yoruba tribe. This food consists of raw beans that are ground and deep-fried with other spices added to it.  Nutritionally, Akara is hyper proteinous. The bean cakes when finally prepared have a super tempting aroma. I recommend trying out some Akara with good slices of bread.

I conjoined these two tribes because they have a homogenized culture. The only difference with is two tribes is that one culturally practices nomadic rearing while the other tribe doesn’t. Coming to food, they share a lot in common. Their tribes are fully represented in the following states; Gombe, Sokoto, Katsina, Bauchi, Kebbi, Yobe and Benue state. For the Hausa states we have; niger, Adamawa, Taraba state, plateau, Borno, Kaduna, Jigawa, kano.

Let’s look at a list of foods eaten by the Hausa/Fulani’s ehnic group.