The electoral process is the method by which the electorate in a democratic country votes for some citizens who will represent them at the legislative and executive arms of government. 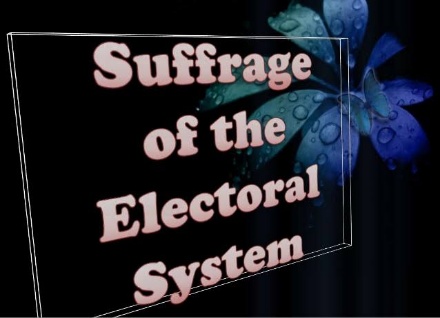 Suffrage or franchise is the right of adult citizens of a nation to vote in an election. In every country there is always an electoral law which stipulates the qualifications of electors and those to be elected. The process of enfranchisement is therefore the way each citizen fulfils the conditions/law that make him or her eligible as a voter.

Qualification for Suffrage or Franchise

1. Citizenship: Only citizens of a country are allowed to vote. Aliens are disallowed from voting and being voted for.
2. Age: There is usually a voting age, eighteen years in some cases and twenty-one in others.
3. Residential qualification: Voters are required to be in continuous residence in a constituency before they can be allowed to vote. This period may be as little as three months or as much as five years or more.
4. Tax payment: Tax payment is a condition for voting or being voted for in some elections.
5. Educational background: Regulations may stipulate minimum educational qualifications for those seeking elective offices. illiterates are thus usually barred from contesting or seeking high government posts.
6. Criminal records: Those with criminal records or prisoners are usually disallowed from contesting elections
7. Bankruptcy: are known to be bankrupt may not be allowed to vote or be voted for.
8. Sanity: Persons of unsound mind are usually excluded from voting or being voted for
9. Registration: Only those who have registered for elections can vote and be voted for.

The Development of Suffrage or Franchise in Nigeria

Voting rights are usually fought for, because they are not always extended to all citizens of a country. Till the early twentieth century, women were denied voting rights in Britain and America. The activists among them formed the suffragette movement which eventually won voting rights for adult women like their men counterparts.

In Nigeria, the right to vote has developed from the colonial period during which elections in Lagos and Calabar were based on property, educational qualifications and the social status of citizens. These criteria determined those who could vote and be voted for. Increasingly, the base of the franchise was broadened to accommodate all qualified adult citizens. This is known as universal franchise.

Types of Suffrage or Franchise

The Purposes and Functions of Elections

The purposes and functions of elections include the following:

1. Accountability Of Government: Elections serve as a means of checking the excesses of the people’s representatives in government. When the people’s aspirations and wishes are not reflected in government policies and programmes, the electorate can effect a change of leadership during elections.
2. Legitimacy of government: Elections are held to enable government leaders to legitimize their rule. Legitimacy of government affords representatives the opportunity of exercising government powers on behalf of the citizenry.
3. Political participation: Elections makes It possible for the people to participate as voters or office seekers.
4. Communication link: Elections serve as a means of political communication between the Government and the governed. It is the process through which decision makers become sensitive to the electorates political demands and address such demands at least verbally.
5. Political education: Elections raise the political awareness and consciousness of the people of a country. Parties present their manifestoes. It enables the electorate to discuss political and other national issues extensively, thereby providing an opportunity for the resolution of controversies and arrival of some form of national consensus.
6. Smooth leadership succession: Elections are held to provide smooth leadership succession by voting.
7. Government control: Elections enable political parties to field candidates whom they campaign for to enable them to control the machinery of government.
8. Patriotism: Elections encourage a sense of identification and nationhood when it is free and fair.
9. Opportunity to test the popularity of leaders: Elections are held periodically to test the popularity of the leaders and their political parties.