Ekiti State is a Yoruba state located in the southwestern region of Nigeria. In this article, we’ll take a gander at this state and outline the local government areas and towns that is situated in them. 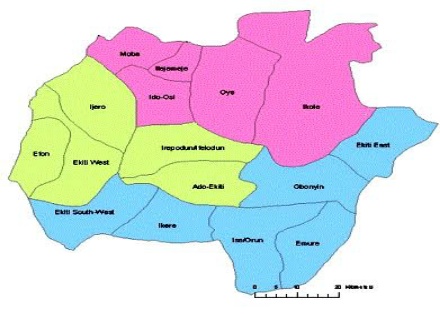 On 1st December 1996, the then military government under head of state, General Sani Abacha created Ekiti state alongside five other states in the country. The state was carved out of the territory of old Ondo State, and it is one of the newest states of the Nigerian federation.

Ekiti state is productive in agricultural resources with cocoa being the leading cash crop produce of the state. In a survey report, a large portion of the state has high productivity of Cocoa, and the state as a whole constituted well over 40% of the cocoa products of the famous old Western Region. Ekiti state is also known for its forest resources, with timber being one of it major agricultural export.

Moreover, with respect to mineral resources, Ekiti state is naturally endowed with numerous a lot of these natural resources. The state is potentially rich in mineral deposits which include granite, kaolinite, columbite, charnockite, iron ore, baryte, aquamarine, gemstone, phosphate, limestone, tourmaline, gold among other bit mineral found in quantities in the state. These minerals are largely deposited in different towns and villages of Ijero, Ekiti West, Ado – Ekiti, Ikole, Ikere, Ise-Ekiti and other areas.

List of Local Government Areas and Towns in Ekiti State

Ado Ekiti LGA is the most developed Local Government Area in the Ekiti state, and it is also the state’s capital. It is headquartered in Ado Ekiti city. There are other notable towns in Ado-Ekiti LGA which are: Ago Araromi, Ajebamidele, Amirin, Aso Ayegbule, Ategbado, Ernfun, Igim Okogo, Igirigiri, Ika, Ikewo, Ilokun and Iranse.

Ekiti East Local Government Area has it administrative headquarter located in Omuo-Ekiti, a prominent town in the area.

Ekiti West Local Government Area has its administrative headquarters in the well known town of Aramoko.

Ido/Osi LGA is a Local Government Area in Ekiti State. It has a capital domiciled in the town of Ido, which the LGA got it name.

Ijero LGA is a prominent local government area in the state. Ijero is popular town and is also a Local Government Area in Ekiti state. It has an administrative headquarter located in Ijero Ekiti, and also comprising of notable towns and villages of Ekamarun, Ijero, Ikoro, Iloro, Ijunrin, Ipoti, Odo, Owa, Idao, Ilukuno, Iroko, Temidire and Abedi.

Irepodun/Ifelodun LGA is one of the sixteen local government area of Ekiti state, and having its administrative headquarters in Igede town. Igede-ekiti, Iyin-ekiti, Igbemo-ekiti, Awo- ekiti Afao, Are, Awo, Igbemo, Iropora, Esure, Eyio and Iworoko towns are the notable towns in the area.

Moba LGA is a Local Government Area in the state. It has its administrative headquarters in the town of Otun, and the area also consist of towns and notable villages like Otun Ekiti, Igogo Ekiti, Aaye-Oja, Osan Ekiti, Iro Ekiti, Irare Ekiti, Isaoye Ekiti, Ikosu Ekiti, Epe Ekiti and Ikun Ekiti.

Oye LGA is one of the prominent local government area in Ekiti state. Popular Oye town, where it got the name, is the headquarter of the Local Government Area.

That’s the size of this write-up as we have been able to outline the local government areas in Ekiti state and their respective towns situated in these areas.