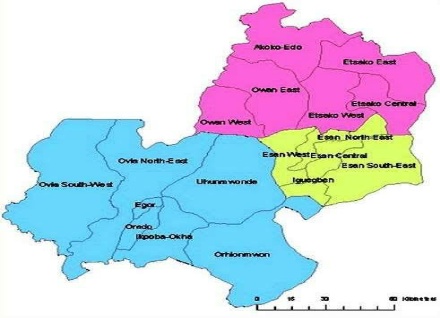 Located in the southern region of Nigeria, the state is bounded by Kogi state to the northeast and east, Delta state to the southeast and south, and Ondo state to the west and northwest; the River Niger flows along the state’s eastern boundary and demarcate it with Anambra state.

The history of Edo state started when it was created in 1991 from the northern portion of Bendel state. The state is made up of 4 major ethnic groups; Bini, Esan, Owan, and Etsako. It is estimated that Edo state has a population of 5 million people, with residents adding up with indigenes to make a good number of people living in the state.

List of Local Government Areas and Towns in Edo state

Benin City, the Edo state capital is the largest urban centre in the area. There are other notable towns that are situated in the state, which will make up this write-up.

Akoko-Edo LGA is renown area and one of the oldest local government area in the state. It has an administrative headquarter located in the town of lgarra. Other towns and districts that make up the area include: Akoko, Igarra, Ikpeshi-Egbegbere, Atje and Kakumo-Anyanran.

Egor LGA is one of Edo state eighteen LGA. It capital is located in Uselu town. Egor LGA consists of towns and villages which include the following: Agidigbi, Egor, Environ Camps, Evbougide, Iguediayi, Iguikpe, Oghedaivbiobaa, Oghokhugbo, Oviasuyi Camp and Ugbighoko.

Esan Central LGA is one of the area that has the Esan ethnic group, a major tribe in Edo state. With it administrative headquarter in lrrua town, there are other notable towns and villages like Irrua, Ewu, Opoji, Ugbegun, Igueben, Ebelle and Ewossa which make up the area.

Esan South East LGA is one of the Local Government Areas of Edo state. The headquarter of the area is located in the town of Ubiaja. There are other notable towns in Esan South East LGA which include: Emu, Equare-Ewatto, Ewohimi, Ilushi, Inyenlen, Ohordua, Okhu-Essan, Onog-Holo and Oria.

Esan West LGA has an headquarter in the popular Ekpoma town. It is one of the eighteen Local Government Councils of the state.  Eghoro, Ekpoma, Idoa, Naoka, Ogwa, Ujiogba, Ukhun and Urohi towns are the notable urban areas in Esan West LGA.

Etsako Central LGA is a Local Government Area with an headquarter at Fugar, consisting of towns like Ekperi, Fugar-Avianwu, Okpekpe and Okpella.

Etsako West LGA is a prominent local government area in Edo state, well known for it economic activities. It is one of the eighteen local governments councils of the state, and has an headquarter in the commercial town of Auchi. Other towns making up the area include: Aviele, Awain, Jagbe, South Ibie and Uzairue-Jattu.

lgueben LGA is headquartered in the town of lgueben. This is one of the notable areas in the state. Other towns in Igueben LGA include the following: Amahor, Ekpon and Ugun urban centres.

Oredo LGA is the most developed and one of the eighteen Local Government Areas of Edo state. It has an headquarter in the prominent town of Benin City.

Orhionmwon Local Government Area with its headquarters in Abudu town, and it has towns and districts comprising of Aibiokunla, Igbanke, Oloten, Ugboko, Ugu and Urho-Nigbe towns make up the area.

Ovia South-West Local Government Area is one of the eighteen LGA in the Bini state. It has an headquarter which is located in the town of Iguoba-Zuwa. Towns like: Ofunama, Ora, Siluko, Udo, Ugbogue, Umaza and Usen also make up the area.

Owan East LGA is one of the local government areas in Edo state that has the Owan tribe. It gas an headquarter sited in Afuze town. However, other urban areas like: Emai, Igue, Ihievbe, Ikao, Ivbi- Mion, Ive-Ada-Obi, Otuo and Uokha towns still make up this LGA.

Owan West LGA is in list as one of the eighteen LGA councils of Edo state. It is headquarted in the town of Sabongida Ora consisting of other towns like Iuleha, Ora and Ozalla.

Uhunmwode LGA is a local government area in Edo state. It has an headquarter in the town of Ehor, with other towns like Egbede, Ehor, Igieduma, Isi North, Isi South, Uhi and Umagbae still making up the area.

A view of the ancestral and traditional displays of the Benin Kingdom will make you want to know the renown places that are in Edo state. We’ve outline the towns in the state and their corresponding local government areas, so as to get you covered.

Thats our take on this as we have make you to know where to visit in the historic state!