Ebonyi state has numbers of towns making up the 13 local government areas of the state. From the agricultural production areas to the tourist attraction sites, all are located in the state’s area. 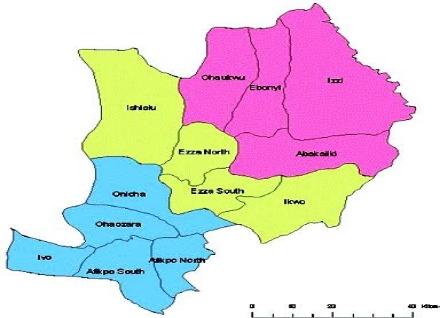 In this article, we’ll explain the urban areas that are situated in the local government areas of Ebonyi state.

Ebonyi state is referred to as the “Salt of the Nation” due to the large deposits of salt in the area. Created in 1996 by the Gen. Sani Abacha rigime, the state one of the youngest states in the country. Ebonyi State is located in the south-easthern region of Nigeria. The State is bordered with Benue State to the North, Enugu State to the west, Imo and Abia States to the south and Cross River State to the east.

Agriculture is the major economic activity in Ebonyi state. The people of the State are predominantly farmers and traders. The main crops produced in the State are rice, yam, palm produce, cocoa, maize, groundnut, plantain, banana, cassava, melon, sugar cane, beans, fruits and vegetables. Fishing is also carried out in the river area such as Afikpo. In terms of mineral resources, the state has a variety of many, such as lead, limestone, zinc and marble. Moreso, Ebonyi state has a slogan “the salt of the nation” due to the large salt deposit at the towns of Okposi and Uburu.

Tourism is not excluded from the state, as a lot of tourist attraction sites are in the State. They include Ndibe Beach in Afikpo, the salt lakes in the towns of Okposi and Uburu, and Ishiagu Pottery Works in Ishiagu. Other attractions to the State is the rich cultural heritage they have. This is expressed in the many colorful cultural dances, folklore and artwork, which have attracted a lot of national and international attention.

Abakaliki town, the state capital is the largest urban area of the state, with Afikpo town being the following. Other towns that are located in Ebonyi include Ikwo, Izzi, Onicha, Edda, Onueke, Ezzamgbo, Nkalagu, Uburu, Ishiagu, Amasiri and Okposi.

List of Local Government Areas and Towns in Ebonyi state

Below is the outline of towns that are situated in these Local Government Areas;

Abakaliki LGA is the most developed area in Ebonyi state, due to being the state’s capital. It is one of the thirteen local government areas of the state, with an administrative headquarter Nkaliki town. Other towns in Abakaliki LGA include: Abakpa, Amachi, Amagu and Amagu Unuhu.

Afikpo North LGA is another Local Government Area in Ebonyi state. Afikpo town, which the area got it name is the headquarter of the LGA. Other notable towns include: Ohaisu, Itim, Nkpoghoro, Ugwuegbu and Amaizu.

Ebonyi LGA is a Local Government Area in Ebonyi state. The LGA is obviously where the state got it name. The administrative headquarter of Ebonyi LGA is in the town of Ugbodo with other urban areas like Amadi, Nkoleke-Achara, Izzi Unuhu, Nkaleke-Achara, Okpui-Tumo, Edda, Amagu and Ishieke also making up.

Ezza North is one of the Local Government Areas of the state. It has an headquarter located in the town of Ebiaji. Towns like Amagu, Amawula, Achara-Ezza, Amana, Amazu, Ameka, Amuda and Amudo-Ekka are the notable towns in the LGA.

Ohaozara is a Local Government Area in the state. Its headquarter is located in Obiozara Uburu town. There are other urban areas that made up this LGA include the following; Uburu, Ugwu-Langwu, Ishiagu, Okposi and Akaeze.

These are the rundown of the local government areas in Ebonyi state. We’ve also incorporate the prominent towns in the respective areas, so as to give you a glimpse on where to visit in the ‘salt’ state.