This post gives a full list of the immediate family of Donald Trump, (45th President of the United States) wives, sons, daughters, children and grandchildren. 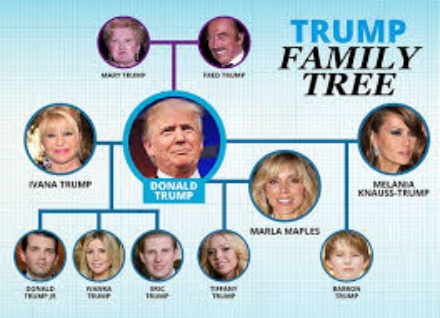 1. Melania Trump: She is the third wife that Donald Trump married. Melania is the current and Incumbent First Lady of the United States. Born on November 26, 1970, in Yugoslavia currently Slovenia. She was a model. She gave birth to Barron Trump, a son she had with Donald Trump.

2. Ivana Trump: She was one of Donald Trump’s former wives. Ivana Trump was born in 1949 in Czech republic. She and Trump were part of New York City’s social elite during the 1980s and they got married in 1977. The two separated in 1990 and Ivana won a $20 million divorce settlement. Ivana Trump children includes: Don Jr., Ivanka, and Eric Trump.

3. Marla Maples: Marla was involved in a six-year marriage with Donald Trump, the current President of the Unites States. Born November 27, 1963, Marla Maples is an American actress and television personality. She gave birth to a daughter, Tiffany Trump

All together, Trump has five children (3 boys and 2 girls) from three different marriages. He also has eight grand-children which we shall discuss below

The three children listed above are Donald Trump’s three eldest children from his first marriage with Ivana Trump. After Trump’s victory at the polls against Hillary Clinton, they were put in Trump’s presidential transition team. Donald Jr. and Eric are said to be the managers of the family’s real estate business while Ivanka will move to Washington after her husband Jared Kushner was appointed at the White House advisory position.

She is the only child of Donald Trump and Marla Maples. She studied sociology at the University of Pennsylvania.

According to Wikipedia, Donald Trump currently has eight grandchildren. Five by his eldest son Don Jr. and three by his daughter Ivanka. Their names are given below according to their parents: