There are states in Nigeria that are very dirty. Even if some of these worst states set Thursdays and the last Saturday of the month as environmental sanitation’s day, the demon of uncleanliness still lurks around these states.

In a bid to sensitize inhabitants and citizens in a country on the need to keep the environment clean by getting rid of dirt and trash, the UN set up the United Nations Environment Programme (UNEP) and also proscribed the 5th of May every year as World’s Environment Day.

Most inhabitants don’t even know the implications of what a dirty, polluted and unclean environment does the health, the various diseases like Malaria, Typhoid and other unknown health hazards known to man it can cause, plus environmental disasters such as erosion and blockage of drainage systems.

Although, the efforts of the government of the guilty states by providing waste-bins, dustbins and baskets all over the areas of the state have not yielded positive results as heaps of waste are still seen littering and beautifying the various streets.

Without further ado, below are the dirtiest states in the country with a record of always being unclean this 2022:

Lagos has been dubbed the dirtiest place in Nigeria this year. Aside from the fact that Lagos state is the most populated state in the country and one of the most developed, it has failed to lead in that regard.

A drive or walk around the many areas within Nigeria’s commercial hub shows that heaps of waste are dropped on road sides, even passersby and car owners/ occupants throw things on the roadside which sometimes goes beyond the control of waste management officials.

Lagos recorded some level of cleanliness during the era of former governor Raji Fashola especially when he introduced KAI, but can’t say the same for the present regime.

An example of a dirty places in Lagos is the popular Dustbin Estate located in Awodiora, Ajeromi Ifelodun Area which has a heap of refuse located beside a canal, which drains waste, and floodwater out of Ajegunle.

Anambra is another dirty state in Nigeria that really need to be kept clean. A visit to one of the main city in Anambra state, Onitsha will shock you as you would be greeted with lumps of waste on the road sides and various streets in the town.

The inhabitants of Mkpor & Nnewi another town in the state are known for throwing dirts at the popular park in the area thereby causing pollution which has health effects on passersby.

The government is yet to act on this as the agency in charge of seeing to the prosecution of offenders are not functional in the state.

During the time of the past governor of Abia state, Theodore Orji, Aba became the dirtiest city in Nigeria and even found a place among the list of worst places to live in the world. 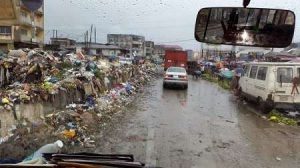 Even though it is a popular city in the country where virtually local goods are produced, Abia indigenes still suffers from uncleanliness.

To add to their woes, cases of erosion, flooding and other hazards are known to occur in the state which has led to the loss of properties worth millions of Naira.

Kaduna state might boast of its economic strong base in the north, but that does not exempt her from being one of the cities in the country that is extremely dirty.

One thing that most of the government of these states do is that they focus on keeping the capital cities clean and neglect the remaining towns.

You might be wondering why Ogun state is on this list of unclean states in the country, but this state is lacking a proper waste management system which makes it hard for indigenes to dispose of their dirts and refuse.

Another dirty city in Nigeria is Kano state. Even though Kano is one of the richest northern states in the country with a large population, the environment is nothing to write home about. When you pay a visit to some parts of the state, you will see why it is among the dirtiest states in Nigeria today.

In fact, Kano’s environmental commissioner said that Nigeria’s commercial capital city in the north is creating more refuse that is posing serious health risk to Kano inhabitants. People are left with no choice but to dump refuse on the streets including open sewers and ponds. This is due to the high illiteracy level and poor sensitization of the inhabitants in the state.

This worst state has some polluted areas that is an eye saw and a major risk to the health. Just like Ogun state, some areas have really poor waste management systems. Although, in 2020, Ibadan which was formerly ranked among the unclean cities in Africa has seen some significant improvement as the OYO State Waste Management Authority (OYWMA) has achieved 60% compliance with the state’s waste management law compliance.

Ekiti state was ranked among the dirtiest cities in Africa in 2017. It will shock you to know that Ekiti is blessed with the highest number of persons who openly defecate as you would find heaps of waste along the New Ilawe Road, Bank road, Oja Oba and other rural locations in the state.

Ekiti state was added to the list after a recent survey conducted by the Community-led Total Sanitation (CLTS).

Even if Benue is home to one of popular rivers in the country, its inhabitants still suffer from water borne diseases due to polluted water from dirts and feaces thrown into the river.

Benue state is one of the states with the poorest environmental condition in the country. If you stay in Wurukum or you are a resident of Wadata, you will agree that people dump waste in drainage, roads and even uncompleted buildings.

We know some of our readers will disagree with this list of most dirtiest states in Nigeria while some will support. Whatever the case may be, use the comment section to air your views as to why these states either merit this list of polluted states in the country or not.