Delta state is a rich oil and gas producing state in Nigeria, and they have a rifenery and sea ports to complement this. This write-up will list out the local government areas and notable towns in Delta state. 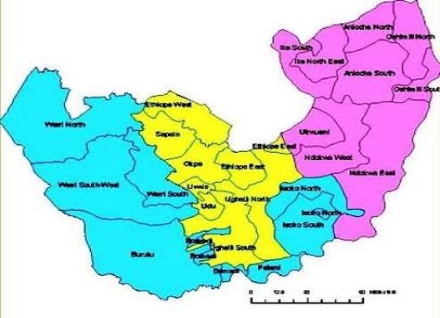 The State got it name after the delta region of the River Niger, which is major in the state area. Delta State was created on 27th February 1991 from the then Bendel State during the regime of General Ibrahim Babangida.

Located in the coastal southern part of Nigeria, Delta State is bordered with Edo and Ondo States to the north west, Imo and Anambra to the north east, Rivers and Bayelsa States to the south east. Also, it has approximately 122 kilometres of coastline on the Atlantic ocean in the south west and south.

Asaba town is the capital of Delta state, and Warri city is the largest commercial urban area in the state. Other major towns still within the state include Agbor, Ughelli, Oleh, Ozoro, Oghara, Sapele, Koko, Burutu, Okpanam and Ogwashi-ukwu.

List of Local Government Areas and Towns in Delta state

Isoko North LGA is a prominent local government area in Delta state and it houses the State Polytecnic at Ozoro town, it administative headquarter. Other towns in the area are: Ellu, Emevor, Iluelogbo, Iyede, Okpe-Isoko, Otibio, Ovrode, Owhe/Akiehwe, Oyede and Ozoro.

Okpe LGA is an Urhobo local government area. It is one of the 25 LGAs of Delta state and it has an administrative headquarter in Orerokpe town. Towns in Okpe LGA include: Ajaguoyibo, Arunuse, Egbaghe Egbega-Oviri, Egbele and Obamedi.

Oshimili South LGA is a Local government area in Delta state with an administrative headquarter in the town of Asaba, the state’s capital. As a developed area, there are many towns in it which include: Agu, Anala Amakom, Cable Point, Ogbele, Okwe, Ugbomanta quarters, Umuaji, Umuezei, Umuonaje and West End.

Patani LGA is one of the 25 Local Government Areas of Delta state. It has an administrative capital in Patani town, which the area got it name. Other towns are: Kabowei, Kumboei, Agoloma, Bolou, Apelebiri, Bolou-Angiama, Odoruba and Toru-Angiama.

Sapele LGA is a renown area and one of the twenty-five LGAs of Delta state. The popular Sapele town is the administrative headquarter of the LGA.­ Other prominent towns include: Amukpe,Ugborhen and Elume.

Ughelli North LGA is a renown area in Delta state. Its capital is located in the town of Ughelli and other major towns include: Agbarha-Otor, Agbarho, Evwreni, Ogor, Orogun, Ughelli and Uwheru.

Delta state is one of the richest states in Nigeria. Much of the state’s wealth is credited to the availability of petroleum and accompanying industries. To complement it as a good place to visit, there are many tourist attractions, sand beaches and islands in the State. We’ve listed the towns and local government areas in Delta state, in this write-up.