One might think that, Abuja as the seat of authority in Nigeria, is well-policed to avoid crime, but this is far from the case. The city, like many others around the country, has its share of bad neighborhoods. 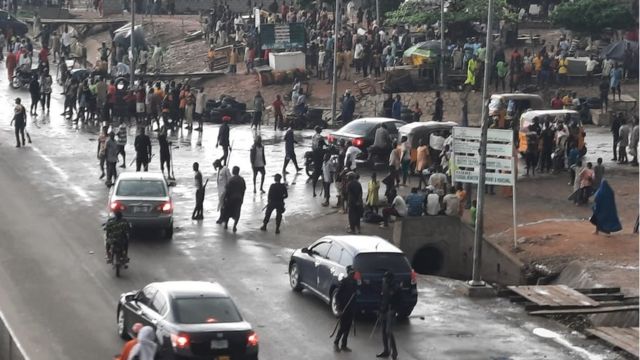 According to official statistics from the Nigerian Bureau of Statistics, Abuja has Nigeria’s second highest crime rate behind Lagos. Despite being one of the world’s fastest developing cities, there has been a significant increase in the number of criminal activities.

Hoodlum crimes have become catastrophic in select strategic locations throughout the metropolitan area. The top 10 of these locations are listed below, ensuring that you do not end yourself in the city’s red zone.

TOP 10 MOST DANGEROUS AREAS IN ABUJA TO LIVE IN

The following are some of the most notorious sites in Abuja that you should avoid.

Wuse Market is located in the Wuse District of Abuja, in the northwestern section of the city. The market, which is located in Zone 5, is the city’s main market. It is bordered to the north by Maitama District and to the south by the Central District.

Residents claim that theft has occurred often in and around Wuse market, including the stealing of bags, phones, laptops, and other goods late at night. Traders, commuters, and taxi drivers in the vicinity claim that these heinous crimes are committed largely at night by hoodlums who disguise themselves as traders, cabbies, and even taxi drivers.

According to them, the Wuse Market intersection is steadily turning into ‘Sodom and Gomorrah,’ and the relevant agencies are ignoring it. Many robberies have been reported along the route near Wuse market.

The Bolingo Hotel and Towers is located on Independence Avenue in Abuja’s Phase 2 neighborhood. At Bolingo intersection, there have been reports of hoodlum incidents ranging from bag snatching to phone theft and car destruction. This frequently happens near the intersection of the Olusegun Obasanjo Way and the Nnamdi Azikiwe International Airport.

ALSO READ:  The Most Neatest Tribes in Nigeria Today (2022)

According to a news report, hoodlums in the area use the advantage of speed breaker and traffic signal to rob motorists and commuters at night. The bulk of their victims are locals who travel the airport road.

Snatching of bags and stealing of phones is a frequent occurrence, according to people who work near Bolingo crossroads. According to a news report, the culprits utilize a bush path next to the Bolingo fence as an escape route whenever they do their horrific act.

Masalachi is a crossroads in the Central Business District that connects the National Mosque, Samuel Ademulegun Avenue, and Herbert Macaulay Way. Despite its proximity to the Presidential palace and the country’s Three Arms Zones, there have been multiple incidents of hoodlums allegedly stealing women’s bags from the area at night.

Multiple Masalachi junction users claimed that hoodlums target predominantly women, and that police have made several arrests around the intersection. Despite the fact that no murders have been reported, many of them have been apprehended by security personnel and charged in court.

Dantata Bridge connects Galadimawa roundabout on the Lokogoma express way with the Nnamdi Azikiwe International Airport road in Duboyi District. The hoodlums that congregate at this isolated place late at night frequently rob their victims on both sides of the bridge.

They commit crimes such as bag stealing and forcible valuables snatching, and they have been known to knife their victims if they do not cooperate. According to the investigation, lawbreakers take use of the tick vegetation around the road as an escape route.

Residents in the area claim that robberies have occurred frequently at night along Dantata Bridge.

Area 1 is in the Garki District of Abuja’s south-west quadrant, with the Central District to the north and the Asokoro District to the east. One of the busiest stops in the city is the Area 1 intersection, which connects Wuse, Apo, and Durumi. Despite its close proximity to the headquarters of the Nigerian Police Mobile Force, there have been multiple allegations of robbery.

ALSO READ:  How To Become A Neurosurgeon in Nigeria (2022)

The Area One Roundabout, particularly under the bridge, is always perilous late at night and early in the morning, according to some neighbors who spoke to this newspaper. In response to the occurrences, the FCT police leadership stated that all efforts are being made to provide adequate security for people.

The Apo Roundabout is located on Garki 2 of the Nnamdi Azikiwe Expressway. It is one of Abuja’s most popular bus stops. The well-known Roundabout is considered one of the most dangerous sites, particularly at night.

Rape and sexual harassment of women, as well as the stealing of phones and other valuables from passers-by, have all been recorded in the area on numerous occasions.

Assailants frequently descend from the slope near the roundabout, which has been stormed by security officers, it has been learned. Despite the raids and arrests, criminal activities continue to take place at the location.

Airport Road is one of Abuja’s most heavily traveled routes. The region has seen an increase in crime rates throughout the years. One of the victims told news reporters about coming across some hoodlums on the road.

He claimed the incident occurred while he was travelling along Airport Road to Dunamis Gospel Church. He informed reporters that his vehicle had a problem, prompting him to pull over to the side of the road in search of a mechanic.

“As soon as I went over to the opposite side of the road, three men brandished firearms and hustled me into a tinted Corolla car, which they drove away in.” “However, after driving me around and robbing me, they dumped me on the side of the road and vanished,” the victim explained.

The Julius Berger Junction has earned the moniker “One Chance Zone” due to its reputation for quick robberies. Criminals that operate there late at night love to pick up their unsuspecting victims from the bus stop.

Victims have described how the crooks took their possessions from them at regular intervals. According to victim testimony and hospital sources, people were robbed of their phones and money, and were injured or killed.

Mabushi is a posh neighborhood of Abuja’s phase 2 district, located west of the city center. The area is densely populated and well-developed. It is strategically placed at the intersection of Abuja’s inner and outer districts.

The Mabushi and Jabi Bridges are well-known bridges that connect people to various parts of Abuja. However, aside from the benefits they provide during the day, bridges are unsafe places at night.

Another important road in the capital city is the Area 1 Junction, which connects the districts of Wuse, Apo, and Durumi. According to neighbors, there have been multiple complaints of robbery in the area, notably under the bridge. Late at night and early in the morning, the region is reported to be dangerous.

Nigeria’s capital city, Abuja, is where the country’s administration is based. Despite the fact that Abuja has numerous secure government locations, there are those that are not.

More areas of Abuja’s capital are gradually becoming enclaves where inhabitants are attacked and robbed at night. Theft, snatching of precious things, and even stabbing of inhabitants have all been reported, especially at night.

The city of Abuja is one of Nigeria’s ten most populous cities, according to the 2006 census. With a large population comes a high rate of crime.