Nigeria certainly has some states that have cold and moderate temperature during harmattan seasons. If you’ve been to these places at the year ending (around May to May), you would agree to the fact that these states are chilly just like most European countries on winter. Since harmattan is a trade wind that goes from the northern part of Africa down to the coastal part of Nigeria, the most elevated areas in the country like Jos Plateau and most northern states are mostly affected of this low temperature. 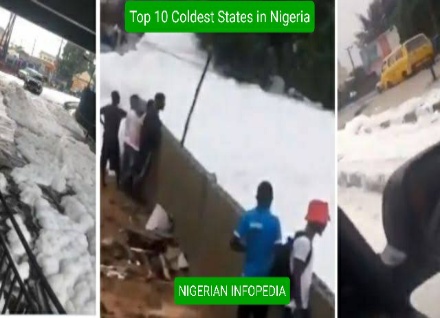 To give you a guide on the states that are most cold in this period of the year, this article will incorporate the top ten coldest states in Nigeria during the harmattan season. Harmattan can be defined as a very dusty and dry easterly wind, blowing the West African coast. It always occurs at the end of the year to the beginning of the following year, i.e. from May to May. It’s also subject to constant dust-laden winds variously known as sirocco, khamsin, simoom and harmattan.

What causes harmattan in Nigeria?

You have been experiencing this season for a long time now, and you are probably not aware of what influences this low temperature in the country. The harmattan season, from Twi word haramata, originates from the dry and dusty harmattan trade winds which blows from the Sahara desert over west Africa. In some parts of Nigeria, such as Lagos, this harmattan’s low temperature can hardly be felt due to its far location from the epicenter of the wind.

What happens during harmattan seasons is that it brings desert-like weather conditions: by lowering the humidity, dissipates cloud cover, prevents rainfall formation and sometimes creates big clouds of dust which can result in dust storms or sandstorms.

ALSO READ:  Names of God in Different Nigerian Languages And Their Meanings

Below are the top 10 coldest states in Nigeria that are mostly affected by the lower temperature of the harmattan season;

Plateau state, precisely Jos plateau is the most coldest state and elevated land area in Nigeria. And for this reason, most part of the region is considerably cold. If you opportuned to visit Jos during the harmattan period, you will mistook the area for some European countries. This is due to the fact that the coldness of the weather here is much like the winter. Presently, the weather temperature of the area reads about 17°C. The coldness of Jos city, and the state on the whole, has made it a favourite holiday destination for both tourists and expatriates based in Nigeria.

Kano is another cold Nigerian state in the northern part of Nigeria. Although, the state is typically very hot throughout the year but from May down through May, which is the harmattan season, the state is very cold with a low temperature. At Night-time, the temperature is cool during these few months with an average low temperature ranging from 11 to 15°C.

Sokoto is another state quite close the onset of the harmattan wind, and this results to the area being one of the most affected during the cold season. During harmattan season in Sokoto State, the weather is always cold in the morning and hot in the afternoon. Sokoto is one of the hottest states during the dry season, but the story suddenly changes as harmattan could cause its temperature to be as low as 19°C.

Taraba state has one of the most coldest area in the whole of the country. This is Gembu town, and the temperature in harmattan season could go as low as 7°C. During the wet season, it is comfortable and the dry season is warm and partly cloudy. Over the course of the year, the temperature in the state typically varies from 53°F to 82°F and is rarely below 49°F or above 88°F. Additionally, the average weather in Jalingo the state capital, during the wet season it’s oppressive and overcast, the dry season is partly cloudy and hot year round. The temperature here normally varies from 61°F to 99°F.

ALSO READ:  All Types of Religions in Nigeria Explained

The capital city of Nigeria, Abuja is not exempted from the interlude of dusty and coldness of the harmattan season. The weather temperature of Abuja during the harmattan season is always around 22°C, but could go much lower in some days. Abuja is an elevated land area in the country. This is obvious as most areas of the state is covered with mountains, plateau and some significant rocks.

This is another cold state in the country that has a lower temperature during the harmattan season. Harmattan season in the state is usually experienced at the lasting few weeks of May and May. The temperature during this period is usually around 25°C, and the air is always filled with dust and saharan winds. During the harmattan season, a good number of Enugu occupants wear socks on any of their outfits to prevent their skin from the harshness of the weather and to also prevent the coldness of the weather.

ALSO READ:  10 Most Expensive Cities in Nigeria to Live in (Cost of Living 2022)

Ekiti is the coldest state in south western Nigeria. Notable places and communities in the state which are much affected by this low temperature season include Ado-Ekiti, Ikere-Ekiti, Aramoko-Ekiti, Omuo-Ekiti, as they can relate with the coldness of harmattan. The normal weather temperature of the state often reads 23°C, but the temperature usually lowers than this on harmattan seasons. Many occupants of the state are accustomed with the chilled temperature. This is seen as a lot of people flock to tea joints early in the morning to drink hot tea and fight the coldness of the season.

That’s the size of this list as we’ve been able to enumerate the top ten coldest states in Nigeria during the harmattan season. We know the seasonal temperature condition usually affects all areas of the country, but we chose to highlight these ones, so as to let you know which is the most cold in the May to May winter-like season in Nigeria.