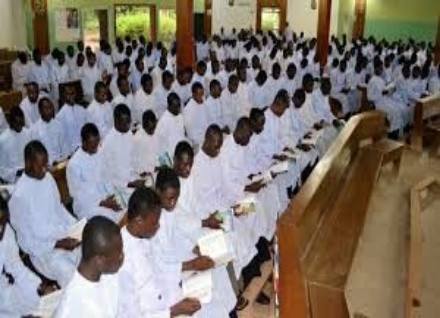 In this article, we would see a comprehensive list of all Catholic seminary schools Nigeria. We would also review the benefits of joining a catholic seminary and also other important information related to the Catholic church in Nigeria. Without further ado, Let’s delve in.

Here are all the best Catholic seminary schools located in various states accross Nigeria with their location and information about these Catholic schools.

Bigard Memorial Seminary is located in Enugu state and is seen as one of the best catholic schools in Nigeria to attend today. It was established in 1922 by Rt. Rev. Joseph Shanahan, the former Vicar Apostolic of the Vicariate of Southern Nigeria as St. Paul’s Seminary in Onitsha. It was until 1924 that the seminary was opened for studies of the Latin language.

Today, Bigard Memorial Seminary stands as one of the most equipped seminary schools, not only in the south east but also in the country. Facilities such as Bigard Chapel, Ave Maria Court/Grotto, Academic Block, Auditorium, Library, Seminarians’ Hostels, Staff Quarters, St Luke’s Clinic, Sports Facilities, Cyber Cafe, Poultry Farm, etc can all be found in this institution.

Seat of Wisdom Seminary, Owerri is another top ecclesiastical institution formed with the purpose of training young men for the Catholic priesthood. This seminary has trained a vast number of priest, especially in areas of Theology, Philosophy and Latin studies. It was established due to the ever increasing number of vocations to the priesthood growing in the province for the Catholic priestly ministry.

The first graduation and ordination of the school’s pioneer Deacons took place in 1992. Over the years, Seat of wisdom seminary has churned out over six hundred catholic priests since its inception, and has a current population of over five hundred and seventy-seven seminarians. Being a seminarian in this school ensures that you thrive in discipline, good work, and excellence in the Christian faith.

ALSO READ:  How To Enroll For A MBA Degree In Business Administration In Nigeria

This is one of the major seminary schools in Nigeria located at Umuahia in Abia state. This religious institution has what it takes to be among the best in training young men to be future priests and also soldiers of Christ. The school inculcates academic and moral discipline in its students, as well as helping its seminarians discover their spiritual gifts to be used in their apostolic missions as they progress.

Seat of Wisdom Seminary, Ariam also doubles as a philosophy campus and they have the best formators, lecturers and state of the art facilities to train future deacons and men of God of the Catholic church.

The Seminary of Saints Peter & Paul is a regional major seminary that tutors and instructs willing candidates for Priesthood in the Catholic church. This school is one of the best in Philosophy and Theology studies. Located in Bodija, Ibadan, this regional seminary, trains students from the Ecclesiastical Provinces of Lagos, Ibadan and Benin City respectively.

The Mission of SS Peter and Paul Major Seminary as seen on their website is to form holy men who are willing to carry out the sacred ministry of Christ Jesus in the celibate priesthood. The Seminary achieves this by training young men and instilling priestly virtues through acquiring theological knowledge, which is one of the seminary programme.

For students who wish to be admitted into the seminary, they must first qualify for the Degree Programme before admission on the recommendation of their diocesan bishops or religious superiors.

The Major Seminary of All Saints was established to provide the necessary conducive environment for the formal training of young men who voluntarily accepted to follow Jesus Christ as Catholic priests through the sacrament of Holy Orders. The traditions of the Church’s Magisterium ensures that this school and its like is the actual training ground for the formation of candidates for the divine priesthood (Pastores Dabo Vobis, 11).

Located in Ekpoma, All Saints Seminary runs a comprehensive eight-year programme for all candidates designed to instill and impart intellectual and pastoral formation thereby providing disciplined virtue in the spiritual life of its candidates. For those interested in picking up priestly vocations, the facilities at this major seminary school is standard with top notch formators and understanding spiritual directors.

This is another top Catholic seminary school located in the Northern region of the country. They major in Theology, Philosophy and Latin and cater for the training of priests in the North. Due to the nature of the region where this catholic school is, most candidates with priestly vocations find it difficult to attend this seminary. As with other schools on this list, it is well equipped with a chapel for meditation, football pitch for sports, Library for study and well ventilated class rooms and hostels.

They are one of the best theological seminaries in the country that prepares and trains candidates for the Catholic priesthood. Admission into this school is mostly for candidates who have already obtained a bachelor’s degree in Philosophy at any recognised Nigerian university. After which the seminary trains such persons in Catholic Theology for a period of four years. Its within this time frame that candidates are prepared for the priestly life and ministry.

Other major Catholic seminaries include:

Attending a catholic seminary school in Nigeria is a serious spiritual commitment. There are so many things that you stand to learn that can help you to be more productive in ministry. You stand a chance to enhance communication skills, deepen your biblical Knowledge and also build a stronger relationship with God. Here are the top benefits of joining a catholic seminary school in Nigeria.

One of the most important aspects of ministerial work is to provide psychological support to your flock. Though, a lot of seminarians feel very uncomfortable with graduate programs in psychology and counselling. But with the quality training that you would receive in a seminary school, you would be better equipped to deal mental needs of your parish members. The best Counselors out there went through a complete blend of academically motivated but religiously inspired seminary curriculum.

There is no biblical translation that is ever perfect. The best way to understand a wonderful message from the bible is to study it in the language that it was originally written. Attending a Catholic Seminary school in Nigeria gives you a chance to start learning the original languages that the bible was written in.

ALSO READ:  Full List of Courses to Study Without Math in Nigeria (2022)

Development Of A Sense Of Purpose For Life

One of the core advantages that you can accrue from attending a seminary school is a broadened perspective for life: this is in turns sheds light on your life’s purpose. As a plus, you would learn to have empathy for other people’s culture, have a wide network, and get to learn of how to apply what you have learnt in the seminary to work with people with varied belief systems.

With your alumni status, you would have constant access to rich and valuable information in your school’s library. Even when new publications are released, your previous or current members of the catholic seminary school will definitely grant you access to rich blueprint resources.

Integrity is the most important part of Nigeria’s Socio-Cultural Standards. By the time your complete your seminary school, you would have a very strong moral backbone and you would also portray the best character ever.

In the business world, financial growth is very proportional to the Broad network you have. The catholic seminary environment allows you to have a lot of connections from all around Nigeria. You are assured that you would enjoy a very large network of contacts for the rest of your life.

A student of a catholic school is referred to as a seminarian. There are various areas of study that a student can choose to indulge in. A student can go on to complete training that is focused on either of the following; Spirituality, Theology or Religious life. Also, a seminarian can enter training with the aim of becoming part of catholic religious outreach either as a Minister, Counselor, or ministry leader.  Finally, let’s see their major areas of study. Most seminarians can choose to focus on; Catholic Traditions, History of Religions, theologies, Religious Figures, Christian Tradition etc.