Borno State is a prominent state in north-eastern Nigeria, and the second largest state in the country by land area. The state has a capital in Maiduguri, the largest urban area in the region. Borno state was created in 1976 from the then North-Eastern State. The state is made up of mostly Kanuri ethic group, and they have a good number of Muslims. 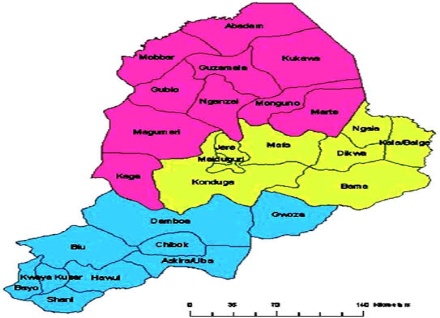 Maiduguri city and Bama are few to mention the notable urban areas in Borno state. In this article, we’ll outline the local government areas and towns that is in this state.

List of Local Government Areas and Towns in Borno State

There are a number of 28 local government areas in Borno state. Here is the comprehensive rundown of these LGAs and the towns in it;

Askira/Uba LGA is another local government area in Borno state. Askira town is the capital of the LGA.

Bama town is the headquarter of Bama LGA, of which the area got it name. Other notable towns include: Kaigamari, Zarawuyaku, Andara, Ajiri Wulba, Buduwa, Jere, and others.

Bayo LGA is a Local Government Area in Borno State, and it headquarter is domiciled in Biriyel town.

Biu LGA is a renown local government area in Borno state. There is an administrative headquater in Biu town, of which the area got it name. Other towns are: Zarawuyaku, Waka, Mandara, Abdu, Garwashina, Tabra, Burutai, Dadin Kowa, Dugja, Garubula, Gur, Kenken, Mandara Girau, Miringa, Sulumthla and Yawi.

Dikwa LGA is a prominent area in Borno. It is an emirate, and also a Local Government Area in the state. Dikwa town is the capital of the LGA.

Gubio LGA has an headquarter in the town of Gubio. The local government area also comprises of other towns and communities, which include: Ardimini, Dabira, Felo, Gamowo, Gazabure, Gubio Town, Kingowa, Ngetra and Zowo.

ALSO READ:  List of Requirements For Studying Nursing in Nigeria (2022)

Maiduguri LGA is the most developed area in Borno state. The LGA is both a local government area and the state capital. The towns that make up this urban area include: Maiduguri Urban, Bolori, Bulablin, Gamboru Liberty, Gwange, Shehiri, Mafoni, Limanti, Lamisula and Jabba Mari.

Mobbar LGA has an headquarter in the town of Damasak, and the area covers many towns and communities which include: Chamba, Asaga, Mobbar, Damasak, Duji, Kaveto, Layi, Zanna Umorti and Ghashagar.

Monguno is a Local Government Area in Borno state. It has an headquarter in the town of Monguno. Other towns in the local government area include: Kumalia, Damakuli, Kaguram, Mintar, Mofio, Ngurno, Sure, Wulo, Yele and Zulum.