If you are a Nigerian student and are looking for the best universities in South Africa to attend, then this updated write-up is for you. 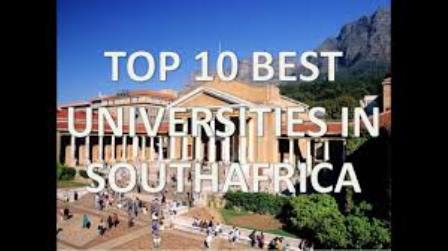 While there are good schools in Nigeria, the level and quality of education here and in other western countries are in loggerheads as universities in abroad system of education isn’t the same when compared to our local schools.

This article lists out the top 10 best universities in South Africa for Nigerian students to attend this 2022 according to their latest academic rankings.

The school faculty of Law, Commerce, and Medicine are consistently placed among the hundred best internationally. The school has 4 suburban campuses and 2 urban campuses. It has a staff strength of about over 4,000 staff with the number of students being 28,700.

Some of their faculties and departmental divisions include:

The University of Witwatersrand is an international public research university in SA located at Johannesburg.

This university just like the one discussed above operates the multi-campus system and had been ranked as one of the best universities in South Africa. Wits University as it is called was ranked number one best university in Africa by ARWU in 2017.

This university was established in 1896 as South African School of Mines. 8 years later, it was renamed Transvaal Technical Institute. Its name was then renamed to Transvaal University College. It kept changing name until it 1922 when it was named Unity of Witwatersrand and was given a university status.

The school has a student strength of about 38,000 with state of the art facilities to boost academic learning and skills.

The school address is at 1 Jan Smuts Avenue, Braamfontein 2000, Johannesburg, South Africa and students who wish to apply for postgraduate programme at WITS can do so online. Wits University currently has 5 faculties ranging from Sciences, Commerce, Law, Management, Engineering, Health Sciences and Humanities with 33 schools offering over 3000 courses.

3. University of Pretoria (UP)

The University of Pretoria is located in SA’s administrative and de facto capital Pretoria. This international school was established in 1908 as the Pretoria campus of the Johannesburg-based Transvaal University College.

This university is popular among PhD holders. According to statistics, 15 percent of PhD holders in South Africa got it from the University of Pretoria. UP is also open to international students.

The university has a student strength of over 50,000 while its administrative staff strength is put at 4,000. UP have many advanced study programmes but if you already have an undergraduate degree, there are still postgraduate offerings available.

Aside being one of the largest research universities in South Africa, UP has nine faculties with 120 academic departments which provides courses offering over 1,200 programmes. The aim here is to enable all students to maximize their own intellectual potential in their chosen field of study through research.

Faculties at University of Pretoria include:

Heading back to the Western Cape Province, Stellenbosch University, located in the small town of the same name, is ranked 51st in BRICS and joint 405th in the world, making it fourth among the top universities in SA that would be suitable for students from Nigeria.

Stellenbosch is one of the oldest institutions in the country, having been established in 1918 (though it has roots as far back as 1864). It now has more than 29,000 students and five campuses, and has cemented a reputation as a world-class institution offering both undergraduate programmes and postgraduate programmes.

Some of the faculties operating within the school are:

Interestingly, the University of Jo’burg ranks as one of South Africa’s top institutions that Nigerian students can attend despite its recent establishment in 2005.

The high ranking can be explained by the fact that it was formed through a merger of three universities: The Rank Afrikaans University, a section of Vista University, and Technikon Witwatersrand.

This young higher education institution is among the top 100 in the world for Development Studies, and it ranks 790 globally as per CWUR rankings.

UKZN currently has a campus in Durban, Pinetown, Kwazulu-Natal, Westville, and Pietermaritzburg.

The University of Kwazulu-Natal has about 1300 academic staff and over 46 students with about 3000 of them being postgraduate students.

Students from Nigeria would find Rhodes University befitting to attend and study at as this school is a public research university located in Makhanda in the Eastern Cape Province of South Africa. It is one of four universities in the province.

The university currently has about 7,000 students and 300 academic staff.

8. University of the Western Cape (UWC)

Up five places to rank joint 139th, the University of the Western Cape (UWC) earned its best scores for citations per faculty member (a measure of research impact) and percentage of international faculty members.

UWC is noted for its significant role in the fight against racial discrimination in South Africa, having originally been founded for black students only during the apartheid period. Nigerian students would find it easy to adapt to this school.

Presently, it has 3 campuses and at least 64,000 students, which makes it one of the largest higher learning institutions in South Africa.

UFS was declared an independent Afrikaans-language university in 1950 and the name was changed to the University of the Orange Free State. The university has two satellite campuses. It currently has 37,000 students.