The Best Stadium in Nigeria Currently

We wrote on 10 largest stadiums in Africa in one of our posts and it was a pity that no stadium in Nigeria was fit enough to enter such ranking. This time, we shall focus on one of Nigeria’s finest stadium which I believe one day would rank among the top stadiums in the world of football. 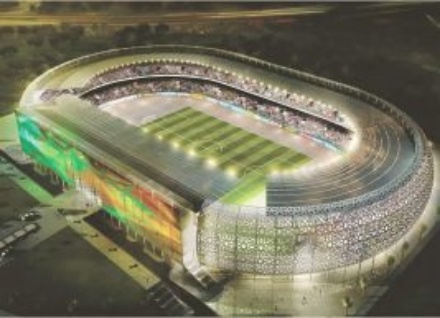 Although, it is on record that the Abuja National stadium was ranked by FIFA as the most beautiful stadium in Nigeria as of when it was built but that should be a thing of the past because another stadium built in recent times has dethroned the popular Abuja National stadium as the best in the country in terms of beauty and facilities.

SEE PICTURES OF THE 10 LARGEST STADIUMS IN NIGERIA TODAY

Currently, the best stadium in Nigeria is the Akwa Ibom International Stadium, Uyo which was built by the former Governor of Akwa-ibom, Dr Godwill Akpabio. This stadium is top class with football training facilities and state of the art equipment. This Nigeria’s modern stadium was built according to FIFA standard.

As earlier stated, the Akwa Ibom International Stadium was built by Julius Berger Construction company in 2012 during the regime of Godswill Akpabio and was completed in 2014. The stadium was built to resemble the Allianz arena in Germany. It is a 30,000 seater stadium and is used for different sport, cultural and social activities. The cost of building the Akwa Ibom International Stadium was estimated at $250 million.

Abuja National Stadium is also known as Nigeria’s National Stadium is a 60,491 seater National sports stadium that is located in Abuja, the Federal Capital Territory of Nigeria. The stadium serves as a home to the Nigerian National Football team. It is currently the largest stadium in Nigeria and best in terms of size. The stadium hosted the 8th All Africa games in 2003. The cost of building the Abuja National stadium was $360 million, making it the most expensive stadium in Nigeria.

The Teslim Balogun Stadium was named after a Nigerian professional footballer, Teslim Balogun. The stadium was completed during the tenure of the former governor of Lagos state, Babatunde Raji Fashola. The stadium has a capacity for 25,000 people and it is used for mainly football matches. Building the stadium cost N1.3 billion. The stadium should not be confused for the Lagos National Stadium which is located opposite it.

It is used as the home stadium of Calabar Rovers and formerly Dolphins F.C. The stadium was first launched on 2nd, December 1977 with a capacity for 16,000 people. It still stands out as one of Nigeria’s top football stadium.

Liberation Stadium is a multi- purpose football stadium located at Elekahia area of Port Harcourt in Nigeria. It is among the best stadiums you can find in Nigeria and the home stadium for Dolphin Football Club. With a capacity for 30,000 people, Liberation stadium ranks among the top 5 stadiums in Nigeria.

Although the Abuja stadium is more expensive than the Akwa Ibom International Stadium, The Akwa-ibom stadium has viewing area and presidential suite, while its pitch/field for playing football is artificial grass which is well maintained. There is also the presence of Close Circuit Security Cameras (CCTV) installed at the stadium to monitor movement around the stadium.