The role of education can not be downplayed in any society if development must take place. In fact, the best secondary schools in Nigeria that offers quality education knows that the key to succed in life, is when children are taught how to speak, learn how to read and write well. 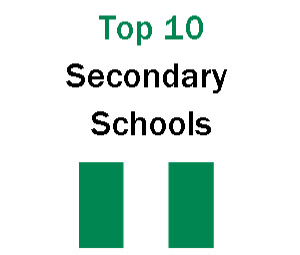 Schools are academic institutions for learning that train students to be better people of society in the future. While there are a many registered private and public schools in the country, we have compiled a list of good quality secondary schools we have in Nigeria for learning various subjects and you can enrol in and are the best to train your children well.

But first, we list the three types of education we have in Nigeria which are:

Let’s talk about formal education, This kind of learnig usually takes place in school premises where a person may learn basic, academic, or trade skills. Little children often attend a nursery or kindergarten but core formal education begins in elementary/primary school and continues with secondary school.

So which is the top 10 best secondary schools In Nigeria this 2022?]

The American International School of Lagos

This American international school is situated in Lagos and was founded in 1964. It offers an American educational program for students irrespective of one’s nationality.

The American International School of Lagos is one of the best private secondary schools in the country, co-educational, which offers an American education system for students in all nationalities at pre-school through 12 grade.

The curriculum at The American International School of Lagos is based on U.S. AERO(American Education Reaches Out) standards.

Atlantic Hall College Lagos is another quality secondary school was established in the year 1989 by the Atlantic Hall Educational Trust Council.

This is a co-educational full-boarding secondary school boasting to providing a well-rounded education system thereby maintaining a fixed student population of 650 pupils from ages 10 to 17; with a staff /student ratio of 9:1.

Atlantic Hall College Lagos has a unique combination of both Nigerian and British curricula with the aim of achieving UK educational standards.

Kings College Lagos, aside from being one of the most popular secondary schools in Lagos is an only-boys school that was established by the British parliament in the year 1909.

Loyola Jesuit College is a boarding school located at Abuja, it was named after the Society’s founder, St. Ignatius of Loyola.

According to its Waec success yearly Loyola Jesuit College Abuja is ranked amongst the best secondary schools in Nigeria.

Loyola Jesuit was established in the year 1995 and was presided over by the Honorable Walter Carrington, the former US Ambassador to Nigeria.

Loyola Jesuit College continues to employ Ignatian Pedagogical Paradigm(I.P.P.) and Ignatian values including a search for excellence, critical reasoning, focused rigor, creative imagination, critical awareness, and cura personalis(care for the entire person) in the formation of its students, staff, and parents.

British international school Lagos, located in Oniru Private Estate in Victoria Island, Lagos, Nigeria, which its opening was in 2001

This school comprises both Day and Boarding and also has a large campus with the teaching buildings surrounded by playing fields within which can be found and a swimming pool along with tennis and basketball courts.

Grange School is a day and boarding school which is located at Ikeja the capital of Lagos state.

Grange School was founded in 1958 by a group of British expatriates, to provide education equivalent to UK standard.

In the year 1998 secondary school was added for continuity and stability in the education of the pupils.

Grange School Ikeja is one of only three in Nigeria to be accredited by the Uk’s Independent Association of Preparatory Schools. (IAPS).

Christ The King College Onitsha also known as “CKC”, is an all-boys secondary school which is located in Onitsha, Nigeria.

Christ The King College Onitsha was founded in the year 1933  by the late Archbishop Charles Heerey.

In the year 1973, it was named after its founder late Archbishop Charles Heerey, before it was later changed back to its original name, “Christ The King College (CKC)” in the year 1976.

Vivian fowler memorial college Ikeja is one of the best all-girls school, located at Ikeja, founded in the year 1991 by Chief Mrs. Leila Fowler.

Vivian Fowler Memorial College was named after Mrs Leile Fowler’s late daughter, its original location was in Surulere before it was moved down to Ikeja permanently in the year 2000.

Thiso academic institution started out in the year 1985 as its former name was Aisha Mohammed International School.

Kaduna International School (KIS) has been running a dual curriculum which is, British National and Nigerian since it’s inception.

It has state of the art facilities that makes learning easy. This includes a well-stocked library, art and design studio, ICT suite, WIFI access points, playground, football pitch and basketball court all set in beautiful and serene surroundings.