Popular filling stations are found on each and every major highway in Nigeria. According to available data, there are over 7,500 registered filling stations in Nigeria located in various states of the federation with the number set to increase as new gas and petrol stations scamper for license to operate. These service stations can as well be located in streets, especially in urban areas. 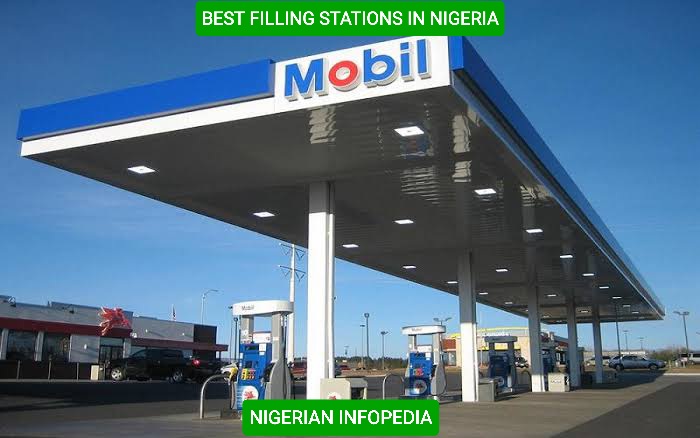 Many business individuals, go into the oil and gas industry because of its profitabity. Many filling stations make close to ₦1 to ₦3 million per day, depending on the area in which they are located in the country. From our research, it would cost about ₦70 million to start a retail fuel station business in Nigeria today, including licensing and equipment purchase. This kind of business is normally meant for the wealthy.

Because Nigeria has so many pumping stations, finding the perfect one to refuel your vehicle may be difficult. With this list of Nigeria’s top fuel stations that are regarded as the best, this info will assist you in determining which richest filling stations in the country provide the optimum operations.

In no particular order, the following are Nigeria’s highly rated popular petrol filling stations this 2022:

Oando has been one of Nigeria’s best petrol stations before it was acquired by NNPC retail. The filling station has gained popularity since it establishment and their stations are found in all the major cities in the country.

ESSO was the previous name for Oando, which was created in 1956. Adewale Tinubu and Omamofe Boyo are two of Oando’s major shareholders. As a result, it is a self-contained oil and gas corporation.

Oando (Ocean and Oil Limited) is a well-known Nigerian fuel station and one of Africa’s biggest. Day after day, the firm produces over 43,000 barrels of oil. Every state in Nigeria has at least one Oando filling station.

In 1956, the very first Total filling station was opened in Yaba, Lagos state. Total strives to provide high-quality products and high customer satisfaction. This renders them one of Nigeria’s greatest filling stations. In addition to the United States, Total has operations in more than 130 countries.

Mobil filling station is ranked as the third best richest filling stations in Nigeria with good fuel meter. This is a well-known petrol and gas station that sticks out across the country. Mobil is a division of ExxonMobil, a multinational corporation. They are active in Africa, Asia Pacific, Central America, the Caribbean, Europe, North America, and South America.

For much more than 26 years, Conoil has operated autonomously in Nigeria. National Oil and Chemical Marketing Plc was its previous name. As Conpetro bought the company in 2002, the name was altered. The corporation is one of Nigeria’s biggest oil and gas companies, with headquarters in Victoria Island, Lagos State.

Conoil filling stations sells gasoline and kerosene, as well as diesel, aviation fuel, and low-pour fuel. Multiple accomplishments have been reached by the company since it began operations in Nigeria.

The popular NNPC filling station is the only government owned service station in this list. The federal government owns the Nigerian National Petroleum Commission (NNPC), which also operates the filling stations. As more than just a federal corporation, they have a greater responsibility to give the greatest services to Nigerian residents.

NNPC has been here for a lengthy moment, although it only started selling retail in 2000. In Abuja and Lagos, the first NNPC fueling stations were established. In Nigeria, there is a NNPC filling station in every state. In total, 500 NNPC filling stations may be found throughout the country. NNPC sells a variety of products, including gasoline, diesel, kerosene, cooking gas, and fuel oil.

The Adrova service station was originally home to billionaire Femi Otedola’s famed Forte Oil. As a result, the offices of the company are in Lagos. They sell PMS, diesel, aviation fuel, kerosene, and various lubricants, among other things.

In Lagos, Petrocam filling stations are very common. However, they can also be found in certain other Nigerian states.

Petrocam was founded in 2004 and currently operates in Nigeria as well as other African countries. Gasoline, Gasoil, Kerosene, Naphtha, Lubricants, and Greases can all be purchased at a Petrocam filling station. Affiliations with oil companies in Europe and the Middle East are also in place.

MRS Holdings owns the MRS filling station. It was previously known as Texaco, and prior to that, it was recognized as Chevron. Patrice Albert and Marco Storari, among others, are in charge of the company, which was created in 1969.

MRS has retail locations in Nigeria’s main cities. The filling station also provides fuel to a number of high-profile businesses. They likewise offer aviation fuel and a variety of lubricants.

In Nigeria’s oil and gas business, Rainoil is a well-known company. The company has been in existence since the early 90s, and commenced business as a petroleum products marketing company in December 1997.

Rainoil Limited is a well integrated downstream company and a leading player in the Nigerian oil and gas industry. The Rainoil Group is made up of business operations that cuts across the downstream value chain. This ranges from retail sales, bulk storage, logistics and shipping petroleum product storage, distribution, and also retail sales.

Rainoil primary products include: Petrol (PMS), Diesel (AGO), Kerosene (DPK), Liquefied Petroleum Gas (LPG), and Naphtha. This fuel station can be found among the major cities and states in the country.

Zenon is a multinational company that is headquartered in Zenon, California. The company’s regional head office in Nigeria are in Lagos, and the most of the company’s filling stations are there as well. Femi Otedola, who was previously the chairman of Forte Oil, started the corporation. It was established in 2003 and is one of Nigeria’s leading filling stations.

Zenon is a large corporation and they sale a wide range of products relating to the industry. Apart from its retail shops, Zenon is a well-known petroleum provider to large corporations in Lagos and Abuja. As a result, diesel is the filling station’s most popular product.

That’s the top picks of the leading ten best filling stations in Nigeria. We believe this information will enable you know which of the service stations in the country offers the best services.