Late Ashley Chijioke Nwosu was a veteran Nollywood a actor who mainly featured in Igbo and English movies. He died at 56 years of age, having an illustrious career in the movie industry and would be remembered as a legendary Nollywood actor. 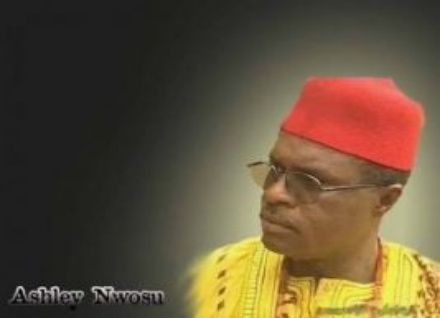 He was also a philanthropist, an entrepreneur, and a television personality.

Ashley Nwosu was born on the 21st of January 1954 in Abia State, Umuahaia-Oboro in south-eastern region of Nigeria and he died on 21st January, 2011 at a Military Hospital at Yaba, Lagos State, in the western region Nigeria.

Originally, he hails from Umugu-Oboro in Ikwano Local Government Area of Abia State in the south eastern part of Nigeria. He’s late fathers’ name is Pa Francis Ibeabudi Nwosu and his mothers’ is Mrs Ezinne Victoria Nwosu. Out of 7 children, he was the 4th.

After his primary and secondary education, he proceeded and gained admission into University of Nigeria, Nsukka at Enugu State, Nigeria and then he graduated with a Bachelor’s Degree in Zoology.

In 1985, Ashley Nwosu came across a beautiful, lovely, and talented woman, who later became his wife today, her name is Grace Iberie Nwosu. She had five children for him, four girls one boy. He was a supportive father to his children.

Ashley Nwosu began his acting career in 1988 with the NTA network in a series of drama called “Tele-movies” and them after he joined the Nigerian Movie Industry “Nollywood” in the early 90s and has then featured in many Nollywood movies.

Ashley Chijioke Nwosu has featured in over 200 Nollywood movies before he died. Some of which include:

His role in movies was either that of a good father, or a paramount ruler or a chief and so on.

He was also a movie producer. As at 2010, he produced his own movie titled “The Shield of Faith” which was premiered at the the Silverbird Galleria at Ikeja, Lagos State, Nigeria on 12th of January 2010.

Sadly, on the 21st of January 2011, Ashley Nwosu left this world at the age of 56 years old at a Military Hospital, Yaba in Lagos. He left behind his wonderful wife and ﬁve precious kids.

He had suffered from liver disease, which he had been battling with for months, that’s was the cause of his death. Before he died, he was one of the gifted, most creative, most skillful and talented actor in Nigeria.

Ashley Chijioke Nwosu was one of the inﬂuential actors in Nollywood before his death. His estimated net worth was unknown.